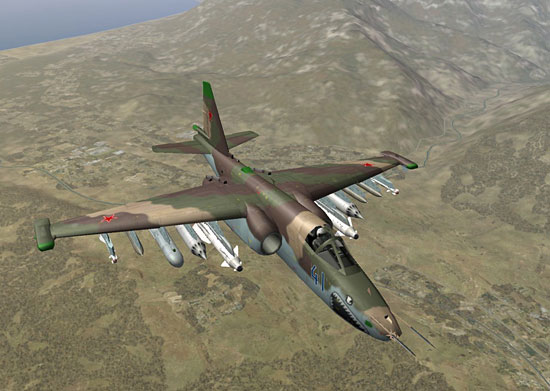 It may come as a surprise to many of our readers that Russia’s most beloved combat aircraft isn’t the modern Su-27 interceptor, nor is it the MiG-29 front-line fighter. And it is not the legendary delta-winged MiG-21 of old, nor is it the equally notorious MiG-25 fighter that terrified the West in the 1970s. While it is true that these aircraft, along with the MiG-23 variable-geometry fighter of the 1970s and 1980s are those most identified by Western nations with the Soviet air force, as well as the air forces of the former Soviet client states, in Russia itself a wholly different combat aircraft has captured the hearts of the average pilot-on-the-street. Above all, Russians are a practical people. Dour, sardonic, cynical at times, deeply passionate, yes, but eminently practical and pragmatic. Their favorite combat aircraft embodies all of these traits, and even today it is the one that the VVS depends on more than any other. This is the Sukhoi-25, known to the Russian air force as Grach, or “rook.” To the West, it is known by its NATO alpha-numeric callsign “Frogfoot,” a name that does not do this versatile aircraft justice. Surprised? A lot of people who hear this are.

If you saw the bird that gave its name to this ubiquitous Russian ground-pounder, you probably wouldn’t know it for what it is. Most Americans would think of a crow. It’s a large, black, unprepossessing bird. But one should never judge a book by its cover. The Su-25 is probably the last combat aircraft that well-known Soviet aircraft designer Pavel Sukhoi had a direct hand in. A lineal descendant of the “storm bird,” the Ilyushin IL-2 “Sturmovik” of World War II fame, the Rook has the same mission-close air support. Given the IL-2’s great success, it is surprising that no follow-on aircraft was immediately developed. It is well known that Josef Stalin stopped the MiG-3 production line in 1942, because the MiG and IL-2 shared similar engines, and the Great Leader and Teacher stated to his factory managers that the IL-2 was as necessary to the Red Army as the bread they ate. Nikita Khrushchev finally halted work on the Ilyushin OKB’s planned successor in 1956, and that was the end of such research in Russia for many years. Thanks to this, the VVS had to press MiG front-line fighters into service to move mud for nearly three decades following the Great Patriotic War. It took a classic head-to-head competition with their arch-rival, the United States, in the 1970s to give the IL-2 its most worthy successor.

Most of our readers have read of the A-X competition in the U.S., beginning in the late 1960s, between Northrop’s A-9 and Fairchild’s fabled A-10 to determine a dedicated tank-killer for the U.S. Air Force. The winner, the A-10 Thunderbolt II, continues in U.S. front-line service to the present day and is being upgraded in spite of Air Force attempts on more than one occasion to scrap it. In the 1960s, the great concern (other than in Vietnam) was a Soviet tank assault through the Fulda Gap in Germany, and Western military planners wanted a dedicated ground-attack aircraft to stop it. U.S. experiences in Vietnam demonstrated how fast-movers like the F-5, F-4, and F-105 were utterly unsuited for close-support of troops in combat, and at that time the Douglas A-1 Skyraider was probably the most beloved aircraft in the Southeast Asian theater, at least by the ground troops. In Europe, the Russians had a great advantage in tanks and numbers of boots on the ground, and U.S. and British war-planners wanted an aircraft to even the scales. This, of course, did not go without note in the Kremlin. The year 1967 marked fifty years since the Bolsheviks took control of the Russian empire in the 1917 Revolution, and a series of huge military maneuvers took place in celebration as a display of Soviet might. These exercises took place on training grounds larger than many Western countries in central Asia, and one of the things that came out of them was a desire for a new Sturmovik to cover the Red Army in battle. Pavel Sukhoi entered the Soviet version of the A-X competition in mid-1968, and the Rook began to take shape.