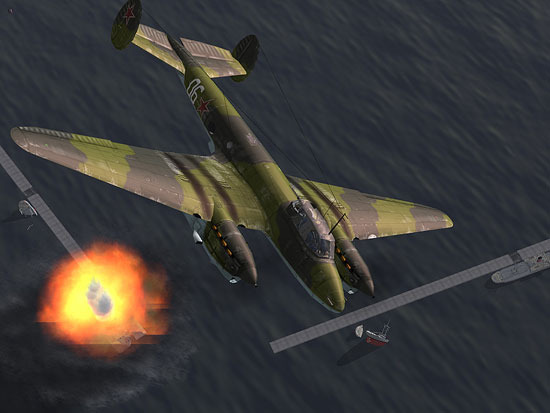 One disappointment is the lack of payload options for the aircraft. Essentially it comes down to different numbers and weights of iron bomb. Given that the real Pe-2’s were also armed with RS-132 rockets, AO bomblets, defensive DAK grenades and field modifications like rearward firing RS-82’s, it seems a shame. Still, the aircraft is a bomber and dive-bomber so what we have will cover 99% of missions and the alternatives will probably not be missed. The fun, after all, is in the dive-bombing! 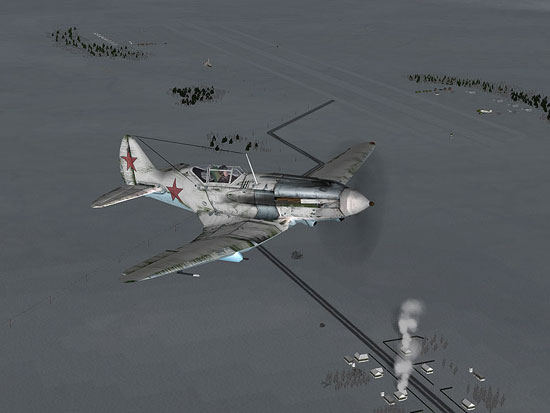 The add-on is marketed as a new aircraft package, the emphasis on the sleek new bombers. It could easily have been promoted as a campaigns package with a couple of aircraft thrown in. The campaigns are that good.

1) Pe-2 Airforce – Army support on the Kursk and Berlin maps.

2) Pe-2 Navy – Fly for the 12th Guards Divebomber Regiment across the Gulf of Finland and the Baltic Sea (Leningrad and Kurland maps).

3) Blinding Sun (Cold Winter) – Defend Moscow against the invader in your MiG-3 then fight back in your Yak-1B over Kursk.

4) Burning Ridge (Dukla Pass) – Fly your IL-2 in support of our divisions breaking through the Carpathians.

The campaigns offer variety and quality. You start from credible airbases that are well populated without being overdone. You pass trains, vehicles on the road and the odd tank battle on the way to your target. Your escorts may pick off a lone Storch that is observing your units. The target areas are well laid out and realistic. Villages in the snow may be destroyed or occupied, with smoke rising from the chimneys. Air combat can happen anywhere — not just the standard head-on engagement but off in the distance or curving in behind you as you turn onto your bomb run. All the customized quality of a handmade campaign is here to see. There are lots of very nice touches, like a damaged plane crash-landing in front of you, tying in with the briefing you just had.

The briefings are a work of art in their own right. Ignore the odd bit of poor English (12th Diving Guards?), poor translation and misspellings and look at the wealth of detail and character that really add to the missions. I’ve never seen briefings this good before. There are some historical mistakes and the briefings often assume an outcome to the previous mission that may not have occurred but within the limitations of the static campaign they are about as good as can be expected.

As a campaign builder it gives me both pleasure and a little discomfort to say that these campaigns are simply the best I’ve ever seen. Really that good. There is nobody pickier than I when it comes to inaccuracies in missions, to the extent that I very rarely play missions made by other people, much less campaigns. I have no such hesitation here — everything I have seen rings true for the period and mission type. There are two minor inaccuracies but I really had to search for them.

A lot depends on how you play the missions. With no externals or map aids, a road recon over enemy territory under low clouds is hard, constantly updating your position to check the locations you have been ordered to cover while peering over your shoulder for bandits coming down out of the clouds just 200 metres above you. With externals and map aids the same mission can verge on the pointless — flying a racetrack and hitting checkpoints in relative safety. I really advise playing them how they were meant to be played.

Still, the campaigns are just outstanding and the fighter and IL-2 campaigns are by no means afterthoughts. Indeed, the fighter campaign is probably the best of the bunch; it is pitched just right in difficulty and I would never have believed that a Mig-3 campaign over the generally barren Moscow winter map could have been so immersive and atmospheric. Nice work Vadson! 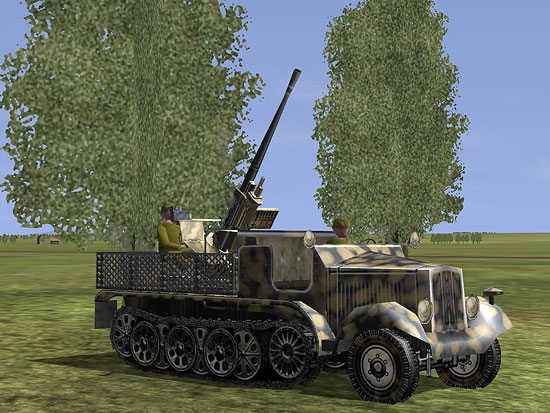 The ground units comprise of artillery howitzers, antitank guns, half-tracks, half-tracks with mounted AA guns and static AA guns. These, especially the new German 20mm and 37mm Flak, are excellent and long overdue. The quality of the ground units is just outstanding and I would predict the demise in missions of the old 20mm “naval” Oerlikon in short order. The Russian truck with the quad Maxim mounting is also striking.