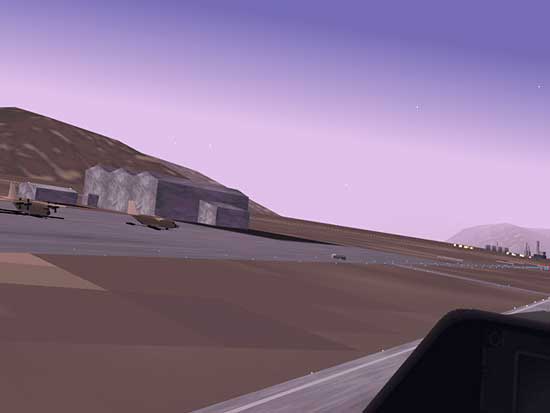 Taking off from San’a Airbase in Yemen we climb into the clear skies above.

Once we are cleaned up and in the climb it’s time to start working on our navigation. In normal cruise flight the HUD mode that gives you the most useful information is the NAV HUD mode. The NAV HUD mode will display a wealth of information that will help you navigate through your loaded navigation waypoints. Pressing the “H” key will cycle through the various HUD modes. 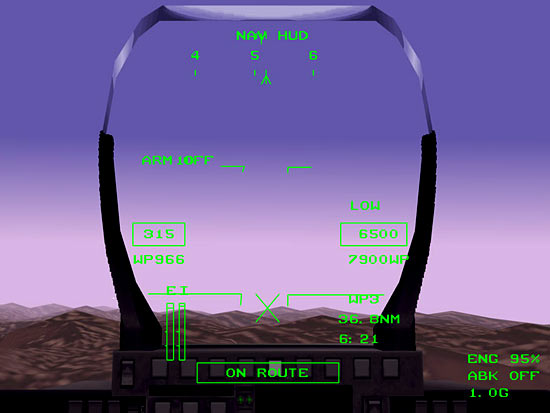 After you have selected the NAV HUD mode you will see several changes to the HUD display. First, in the NAV HUD mode you’ll see the message “ARM OFF” indicating that the weapons are “SAFE” in this mode. In the lower left portion of the HUD will be two bars labeled “E” and “I” which graphically display the amount of fuel contained in your external and internal tanks. The “ON ROUTE” annunciator at the lower center of the HUD, as indicated by the TAW Strategy Guide, does not function since it does not alert you to whether you are in fact “ON ROUTE” or “OFF ROUTE”. The bottom right corner of the HUD displays your selected waypoint (WP3), distance in nautical miles to the waypoint, and estimated time enroute (at your current speed) to arrive at the waypoint. Below the altitude readout on your HUD is the waypoint “target” altitude, or, in other words, the altitude which you pre-programmed on your flight plan. Above the altitude box is an advisory message telling you whether you are “HIGH” or “LOW” in relation to that pre-programmed altitude. Below the airspeed box is a number that indicates the pre-programmed airspeed for the segment you are flying. Interestingly, there is no Mach Speed indicator in the NAV HUD display mode. Finally, a large “X” appears in the HUD to denote the actual location on the ground where you are navigating too and at the top of the HUD a steering carat indicates the proper compass heading to assume to reach the next waypoint.

An additional feature, not shown in the above image, is the terrain following box and flight path marker which aid you in low level flight. At low altitudes, a small box will be displayed on the HUD. Keeping the aircraft’s flight path marker (a small diamond) inside of the small box assures you 200’ terrain and obstacle clearance. The TAW Strategy Guide recommends flying low level flight on the autopilot in heading mode since using that mode will make it easier to take advantage of terrain and obstacle features to keep you at low altitude. As the Guide indicates, while in route mode the autopilot will not seek out the most advantageous (stealthy) route and will take you zooming up mountains to higher elevations when the proper terrain masking route is down in valleys and behind high terrain.

Another very interesting feature of the TAW F-22 is that when you are in terrain following autopilot, the aircraft does an interesting thing when confronted with sharply dropping terrain in front of the aircraft (for instance – a cliff). As the Strategy Guide indicates, there are 3 different ways to deal with over-flying rapid terrain drops. The first is an aggressive “push” on the stick resulting in extreme (and uncomfortable) negative Gs. The second is a more gradual descent back down to the low level altitude which, though more comfortable, exposes you for a longer period of time above the nap-of-earth profile. The third way is how the TAW F-22 deals with this scenario:  the aircraft rolls inverted and pulls, putting positive G on the aircraft (much more comfortable) to get back down to the ideal altitude, then rolls back upright. This is a nice feature in that it most closely resembles how a real aggressively flying fighter pilot would go about maneuvering the aircraft. The Strategy Guide notes there is a drawback to this method though, in that when the aircraft rolls, the radar cross section (RCS) increases dramatically as you are presenting a larger and broader radar target to enemy searchers. It is only momentary, but it is something to be considered.