Simulator training has evolved over the decades not only technologically, but philosophically as well. Many people envision simulator training as panic and sweat filled hours in a dark box being tortured by a sadistic simulator instructor hell bent on overloading you to the point where you break (and crash). While that kind of training may be fun to watch, it isn’t the best use of simulator time and doesn’t accomplish the goal of simulator training:  to teach and improve pilot skills and procedures. Simulator training is VERY expensive and long ago it was determined that stressing out the occupants to the point of collapse wasn’t very beneficial to the learning process. Instead, most instructors use the LOFT training concept (Line Oriented Flight Training) in which you seamlessly fly an entire flight dealing with singular or occasionally multiple systems failures in an environment that more closely replicates the act of everyday flying. For instance, in real life you are unlikely to suffer an engine failure, a landing gear failure, and an electrical fire all at once. Instead, training focuses on likely emergencies and problems and allows flight crews to work through their checklists, exercise and practice CRM (Crew Resource Management), and problem solve in realistic scenarios.

After briefing the profiles, we head down the stairs into the simulator bay. The air smells of ozone and hydraulic fluid and the temperature is always rather cool in the simulator bay. Down below, in a separate room, banks of computers run the motion controls, visual displays, aircraft systems, and a multitude of other items. The sim we are getting into is the Citation V, a Level-C simulator installed in 1995. The different “levels” of simulator basically reflect the capabilities of the simulator to replicate the real thing. Items such as day or night visual display, fidelity, and range of motion (if any at all) determine the class. rating of a simulator. A Level-C simulator is good enough that a pilot can obtain an aircraft type rating without ever having stepped in the real aircraft (provided the applicant meets some other experience requirements). The Citation V simulator is very capable, but some of the more modern simulators at SimuFlite are very impressive with very realistic visuals and cutting edge avionics. 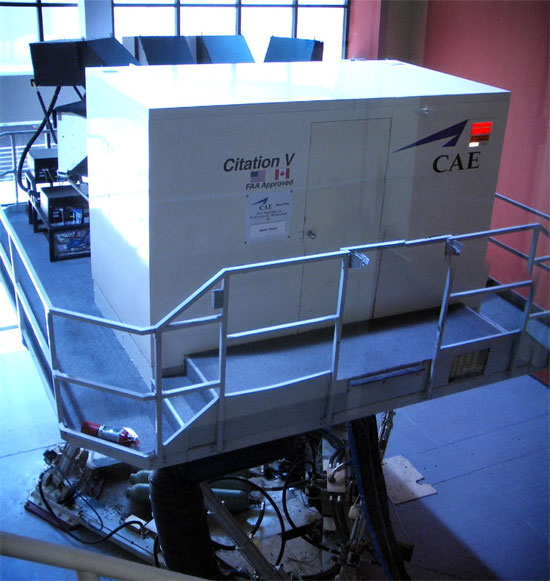 The typical simulator session consists of two hours in the simulator, a 20 minute break, then the pilots switch seats and spend another two hours in the box. In reality, the right side pilot (non-flying pilot in our company) has the highest workload setting up approaches, working the radio, and paging through checklists. The left seat pilot has the relatively easy task of keeping the airplane upright and on course. After four hours in the simulator most of us are pretty worn out and ready for a steak and a beer (one of the rewards of being in training). Maneuvers consist of typical airwork:  steep turns, stalls, and unusual attitudes. The majority of the simulator time is spent in IMC conditions (Instrument Meteorological Conditions) shooting approaches, missed approaches, holds, arrivals and departures. Into the mix the instructor also throws emergency procedures:  engine failures, V1 cuts, hydraulic malfunctions, electrical failures, etc. In addition to the mechanical factors the sim instructor has a wealth of weather options at his fingertips, including variable ceilings, visibilities, winds, turbulence, icing and other environmental factors.

The instructor station in the simulator is immediately behind the pilots and allows him (or her) to control the sim parameters while looking between the pilots to observe their performance. The main method of controlling the sim conditions is via two large touch sensitive screens. In a bucking sim you can often see some pretty interesting results when the instructor’s finger accidentally hits the wrong portion of the screen! 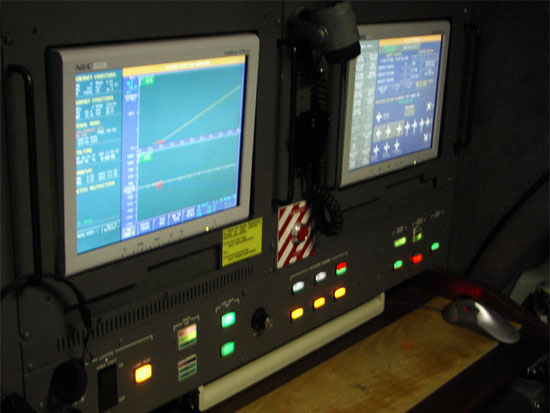