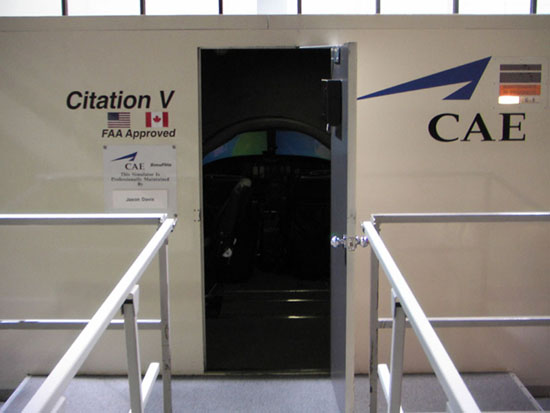 After the briefing the sim awaits and as you walk down the ramp into the maw of the box you hope you can remember everything you are supposed to.

The Citation V sim is in the takeoff position on runway 4R at JFK at night. 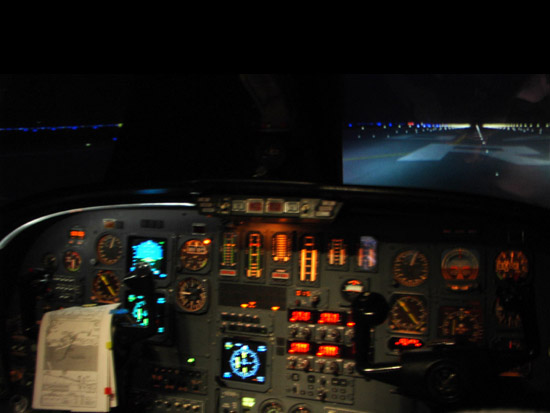 The checkride actually turns out to be anti-climactic. Again, you are so busy that you don’t even think about all the things that *could* go wrong. Instead, you revert back to your training and after 4 or 5 hours, it’s all over. The relief when you step out of the sim after the checkride is physical. Your muscles start to relax, the aching leg from standing on the rudder during V1 cuts goes away, and is replaced instead by the relief that you have 364 more days before you’ll be in this position again. Reviewing the hard copies in the debrief you are proud of your achievements and happy you didn’t screw up (at least not badly enough to fail!). The two most likely maneuvers to bust, the VOR 4L circle to land 31R at JFK and the no flap landing, go well. (Clients often bust the MDA or exceed the bank angle on the circling approach, and the no flap landing is just ripe for problems…)

After the checkride you grab your paperwork and head out to DFW for the return flight home. After a couple beers in the airport restaurant you’re feeling no pain and as the MD-80 heads down the runway you say to yourself “vee-one….vee-rrrrr….vee-twoooo” and nod off to sleep in the cabin. See you next year.