“The weather over your target will be clear today. And, as a bonus, there will be no wind at all. Temperatures will be warm also, I think 25 degrees at least. You will have good weather even into Batumi, for your refueling for the trip to Baghdad.” Major Nicolai Stomsvik tipped his head back, sipping thick tea from a tall glass, and regarding his companion appraisingly. “The word from the operations center is that today you are playing journalist, lugging a camera to take pretty pictures of our Wahhabist friends in the south, and then off to the Americans with the film. They have an…unusual interest in Suhumi these days.”

Alexandra Andreeva munched thoughtfully on a slice of cucumber, studying the weather map that Stomsvik, the squadron meteorologist, had marked for her. “You are well informed, Kolya, as always. Yes, I must go to Baghdad to testify at a hearing for the American air force. The scrap that the American Navy had with the air force tanker, I had to lock my fire-control radar on one of the Hornet fighters to stop him shooting down an air force F-15, and the tanker pilot was escalating the dispute.” She shook her head in disgust. “Disgraceful.”

“Da.” Kolya was pensive, a cloud passing rapidly over his sunny face. “If you had been forced to kill that American… I do not like to think of the consequences to us all. But as for the rest, well, there it is. As you know, here in the badlands a man’s life often depends on a mere scrap of information.” He chuckled. “Or in your case, a woman’s life. And I have a tip for you, Sacha. Haze is forecast, and the optics on those cameras we use will be fogged. Suhumi airbase will be best photographed from 3000 meters or less, I think, for clarity.”

He grew more serious. “I hear other things also, that you may not know. A rumor has reached my ears that the IRLF holds prisoners from the war in Iran. Americans or British, I think. If I have heard this, others have also. And. Sacha, you know that the Wahhabist thugs have a bounty for you and for Vasily as well. Their latest propaganda on Radio Suhumi mentions you frequently.”

Sacha tried to hide a double-take and failed. “You can understand their gibberish?”

“Da, I was an advisor to the Iraqis when they fought in Iran. You of all people should know not to underestimate them, Sacha. And, you have some sort of special significance to them. They even know the types of aircraft you fly, they know you again fly the Su-27, and they know 11 Red by its board number. They speak often of your escape, and the theft of that Syrian MiG, in connection with these prisoners of theirs. You should be careful.”

“Yes. I will. This is an armed reconnaissance, after all, and I intend to take both air to air and air to ground ordinance, not just a camera.” She smiled, wolfishly. “S-8 rockets. I will tickle the Sheikh’s nose for him and see if he sneezes.”

Kolya shook his head, ruefully smiling at her. “That is not what I meant by ‘be careful.’”

“OK, people. Let’s settle down here. This mission is going to be pretty important,” I began. “Commander Phinin, want to start us off?”

“Thanks, sir. First off, I want to say welcome back Bones and again express my condolences regarding Naz. He was a great man and a fine pilot and officer.”

“Yesterday we got another good intel report that the Iranians have been stockpiling their reserve and remaining munitions in several buildings near Aghar Jan. In a nutshell, we need you guys to go in there and take them out.” 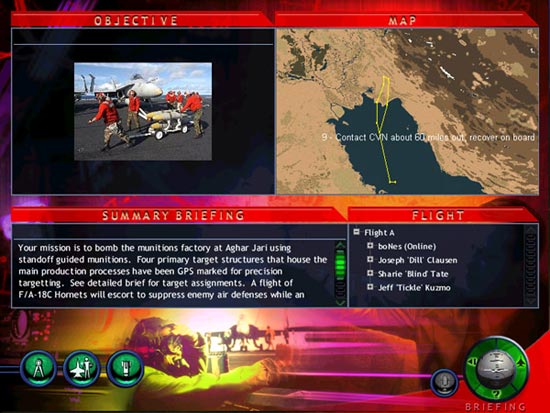 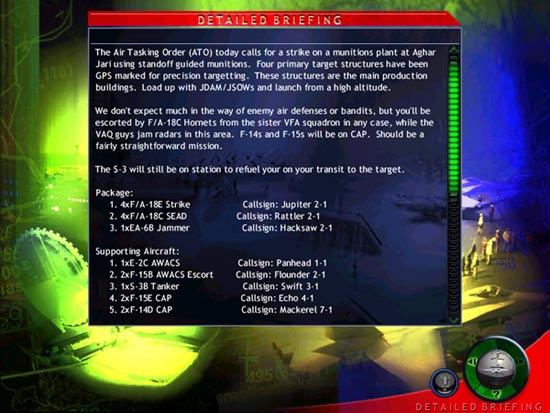