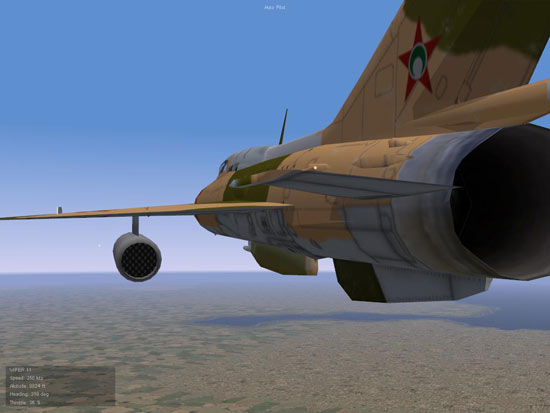 I know, I know, my brothers and sisters. It is been too long since I spoke to you, eh? It has been most busy here in the Emirate of Abkhazia. As you have seen, we are still fighting the Sheikh, and when I last spoke to you things were really beginning to get hot! The war in Iran that the American Navy and Marines are fighting still is going on, and when we last spoke (and you will see the story again in this space, I am told), the Jolly Rogers had struck again, and I was on my way to Bahrain for an inquiry by the American air force into the tanker incident some months ago, where I nearly had to shoot down a Hornet of their navy. My friend Captain Bones tells that story far better than I could, and you may find it in his posts on the forum for the Hornet fighters here in this place. I have had some small part in their struggle, because the Sheikh, he is a student of the Iranian ayatollah. But that story will wait for another time.

It has come to my mind that many of you do not know how I got my start in this, our shared business. It is true that my father is highly placed in our VVS, though I do not like to rely upon him, still, do not think that I have not taken advantage of that from time to time! It is how I have gained such a wide range of flying experiences. But things were not always so. Once I was what you would call a “rookie,” da? And like any new pilot, I had my very first combat mission.

In 1995, I was a new graduate of the test pilot school at Saki, and six of us were posted to our advisors unit in the Emirate of Paran, to complete our training with actual combat experience in their ongoing War of Attrition with the Dhimar Republic. Is it not strange that twelve years ago, I fought with one Emir, and today, I fight against another? But the Emir of Paran is a most kindly, older gentleman, not like Muqtadeh, who would gladly kill until all our streets ran red with blood. Today, Dhimar and Paran are in an uneasy truce, with a United Nations intervention force guarding their fractious border, and our advisors, along with the NATO advisors to the Dhimari air force, are keeping a much lower profile. What with this War on Terror in Abkhazia, and Chechnya, and Iran, and Iraq, the United States and we are allies-if not always happy ones. We do not want to fight one another, for we have a common enemy, the evil ones like Muqtadeh, curse him. In 1995, though, Russia had lost the glorious Soviet Union, and then as now, we did not wish to accept a lesser status in the world. Paran was our ally, and we continued to help them as we could. Paran and Dhimar were fighting skirmish after skirmish on their border, though neither wanted full scale fighting. It has been going on over there for decades, this dirty little secret war. When it flares up, as it does from time to time, it is almost entirely an air war and special operations war. A war of dirty tricks. I am not proud to have played my part in that, but we are soldiers and must follow orders, no?

The leader of our group was Major Ivan Raskov. This is not the first time I would cross paths with Grandmama’s old unit from the Great Patriotic War. Major Raskov is descended from the family of Marina Raskova, who recruited Grandmama from dusting crops in thekolkhoz in 1940 into the 586th IAP, the first all-women pursuit squadron, and my current assignment, though of course it is no longer all-female. At Saki, we were introduced to Raskov, and to an old stand-by in Soviet military aviation, the MiG-21. Many of our aviation cadets still learn in MiG-21 aircraft, before graduating to modern fighters like the MiG-29 and Su-27. My father flew the Twenty One for many years and more than any other jet, this is the one I associate him with. One of my favorite books as a child, strangely enough, was an operations manual for the very variant I would fly in combat for the very first time, nearly twenty years later.

The Parani air force is a mix of old Cold War aircraft, mostly Soviet built. Three types of MiG-21, including the F-13, the PFM, and the MF variants fly to this day for Paran, along with the old MiG-17 and MiG-23. Oil wealth keeps them well maintained, and their pilots well trained. On the other side of the border, an eclectic mix of Phantom and Mirage fighters, along with A-4 Skyhawks and ancient F-100 Super Sabres, make up the Dhimar king’s air forces. A trip to this little island is a trip back in time, for any combat aviation buff. Parani air cadets learn on the F-13 MiG, and graduate to the PFM and MF variants. Their best interceptor pilots fly the MiG-23, and the MiG-17 and Su-7 are used for ground attack.

This day would be my first test. I remember it well. Paran’s D7 airfield is nondescript. Many of their front-line facilities are little more than unpaved, bulldozed encampments with a runway of packed dirt, maintained by bulldozer and road grader. There, the Parani 4th Fighter-Interceptor Squadron maintains its position, facing down their enemies across the border. They are equipped with the MiG-21 PFM, an old, old front-line fighter first coming into service in 1964, years before my father Dmitri Petrovich even met my mother! He tells me of when the PFM was superceded by MiG-21bis and MF fighters in the early 1970s; truly, by 1975 the PFM had been consigned to the scrap yard in all but the Third World! The first time I was confronted by one of these veterans, the look on my face must have been priceless. I remember telling the Major that its place was in a museum, not a front-line airbase!

Major Raskov laughed at that, saying “Ah, Sacha, that old warhorse has plenty of life in him yet. You will see!”

I had trained at the Academy on MiG-21bis and MF aircraft and so the transition took only a day or two. My first solo flight was in a Twenty One, after all! As I said, I knew the manual well from my childhood and truly, this 45 Red I was partnered with quickly became a trusted friend. One does not forget her first love so easily, does one? He was built in 1968 at Znamia Truda in Moscow, when my father was fighting in Vietnam with my current commander. I was still not even what you would call a gleam in my father’s eye yet! Much like American B-52 pilots have found, the airplane is far older, and perhaps wiser, than I. Once we were all up to speed, the acid test. I volunteered for the first mission, a strike on a Dhimari electric generator outside the capital. This was to be the latest in a long list of reprisals for a Dhimari strike on a Parani airbase complex south of our base.

Mornings on this isolated little island are often cold, and this was no exception. A biting chill in even deepest summer is routine in the Paran desert, but by noon it can be blazing hot, over 40 degrees! Of course, that is Celsius measure, I forget that some of you still use English units of measurement. Major Raskov was cheerful as we all took breakfast with the Parani pilots, and we relaxed with coffee as they went to their morning prayers, the six of us discussing the upcoming mission. Once the morning service concluded, we all met in the Operations hut for the briefing.