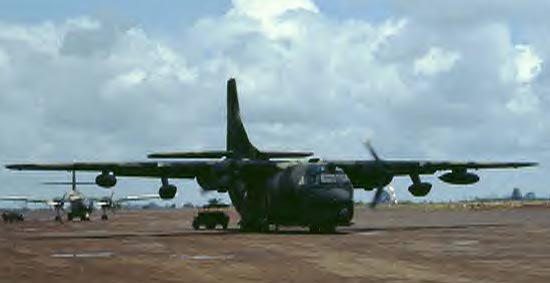 The sparsely-populated Asian nation of Laos is generally regarded to be the most-bombed nation on earth, having served as a second secret front of US involvement in the Vietnam War. Using its remote, difficult terrain as a political and military sanctuary, North Vietnamese forces massively infiltrated South Vietnam through Laos on the ‘Ho Chi Minh Trail,’ in reality a network of trails ranging in size from mere footpaths to roads wide enough for truck traffic. With both sides of the conflict actively fighting, and arming and supporting guerilla armies in ostensibly-neutral Laos, the nation quickly become a major focus of energy and strategy in the war. 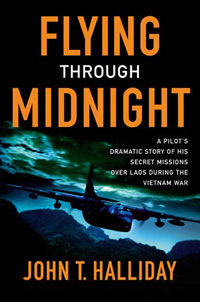 Flying a range of covert air support missions over Laos were CIA and US Air Force special operations forces, flying from bases in neighboring countries such as Thailand. One such task were “Candlestick” missions, illuminating southward-traveling North Vietnamese night convoys with flares, so that other strike aircraft could identify and destroy them.

Recently, a reader, Christian “Semmern” Semcesen, put us in contact with Lt. Col. John Halliday (USAFR (Ret.)), the author of “Flying Through Midnight,” a memoir of his war experiences flying Candlestick missions in a C-123K Provider for the 606th Special Operations Squadron. We had a chance to interview Lt. Col. Halliday about his training, the nature of his flying over Laos, and the tactics used by “Candlestick” crews.

A. My parents said before I talked, when they’d drive by an airport, I’d point and exclaim, “Airp! Airp!” My Uncle George — a TWA captain — reinforced the attraction. I perched on dad’s shoulders outside the cyclone fence at Washington National when Uncle George taxied-in his Super Constellation, blasting propwash in my face. George deplaned wearing his gold-striped uniform and thunderbolts hat and gave me a wind-up Super Connie with spinner props that zipped across the living room. I was hooked.

Q. Why did you join the military?

A. Growing up, I never saw myself as a military man. I’d graduated from the University of Miami in June 1966. Next, I attended night classes at George Washington University and carried enough credits to keep my draft deferment while I worked at the Department of Agriculture by day. The future looked bright, but then the roof caved in.

Out of nowhere, I got my draft notice in January 1967. The Selective Service cancelled my deferment. No explanation; they’d just cancelled it. If I didn’t join another service branch by the 31st, they’d grab me, likely stick an M-16 in my hands, and toss me into the jungles of Vietnam. I was in shock. That night, my dad and I watched body bags loaded onto planes in Saigon. The day’s Washington Post said the Air Force faced a pilot shortage. Dad told me that I faced the decision of my life. I could come home in a body bag, or try to become a pilot. But Air Force training meant six years. Or, I could roll the dice, try to survive Vietnam, and be out in two. On the other hand, my boyhood flying dreams might come true. Shoved from behind, I stumbled through the open door with a smile on my lips, determined to make the best of a bad situation. Little did I know, as Joseph Campbell wrote, “Being drafted was a death and rebirth.”