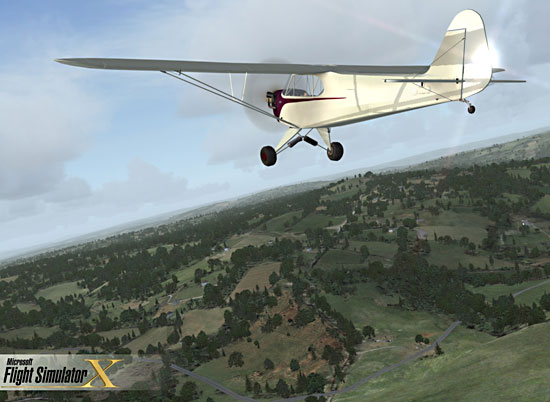 Another bright spot in the next version is support for the multiplayer community. ACES has gone with a client-to-client server setup rather than the peer-to-peer mode from FS9. The result is it’s more robust and easier to use. We got to see it in action in the play test rooms during a “follow the leader” session with one of the members functioning as the control tower. Control Tower? Say what?? Yeah you read that right! With the Deluxe Version your going to get the ability to operate a control tower from the tower cab perspective at locations wherever a tower is present. It was actually quite fun and will make for some very accurate flying for those who know what they are doing in an ATC environment.

We saw a really humorous video showcasing the multiplayer aspects. I think you have to take that in the context that it’s meant. It’s for showcasing how multiplayer can work and the various interest levels and abilities one will see in the MMOG mode. This is kind of a first for Flight Simulator as before it was pretty much a third party add-on for strict ATC sessions. Currently the entry level for a realistic ATC experience is very high, requiring high levels of time commitment and training to achieve proficiency. Microsoft has given the tools to the community which basically mean no more add-ons required to have a realistic ATC atmosphere which is the only real option now.

One of the other areas where Microsoft is changing things up is with the tools we all use to do just about anything to enhance or add to the basic game. These are the “SDKs” or Software Development Kits. These tools and programs allow you to tweak just about anything you can think of in the game. In the past SDKs came either too late or never, leaving the free and pay ware community to hack into the game on their own and develop their own tools. This time around it’s going to be different. The SDKs will ship in the Deluxe Version and ACES is already working with the after market community to develop tools and compatibility for existing add-ons. We saw several add-ons as part of the aircraft selection menu proving ACES claim of third party support from the start. Just the fact that we were sitting in their studio pre release had a big impact on me. For those who have been around for a while it’s a big change and the commitment is definitely there.

There is a ton of misconception about the new “mission aspect” of the sim. Initially, I thought the idea was a move away from the “as real as it gets”  theme. Well the facts speak for themselves. What is really going on is Microsoft and ACES Studios are attempting to expand the user base to the more casual gamer, yet are retaining the basic realism of the sim. ACES now has a dedicated game designer as part of the team. This is a first in almost twenty some years for the franchise. The missions are engaging, they are fun, and they can even capture the interest of the more… ahem… hard core among us. Namely me! There will be 50 missions shipping on the DVDs and are geared to the easier spectrum of challenge for newer and less hard core types. While taking the tour, I saw some well developed story board type characters who will be part of these missions. It will add depth and immersion to have these animated and interactive characters within each mission.

The Deluxe Version is going to ship with the mission editor, just like the one the team is using to develop the 50 missions. I stayed a bit after the fact on my visit and got to spend about an extra hour hanging out with the game designer. He showed me a few missions, all of which easily captured my attention, and we messed around in the editor for a bit. It appeared easy to use and able to create very complicated scenarios. I think this is going to be a very popular part of this version and could lead to some wonderful and exciting missions from the third party folks. Its definitely worlds better than the current adventure system. Overall, I see the support aspect for all of this really happening. It’s not just window dressing and it means we all get much more enjoyment out of an already great value.