Some people would say the Static display at this years show was particularly thin compared to previous years but with consideration of current World Events and also memories of the last two shows I believe we had a particularly good year with some rare aircraft such as the Mirage 2000 BGM from the Hellenic Air Force, the Polish An-26 and also the Czech Mil Mi-17 Hip. Superb additions to any UK display and sometimes would only be attracted to the UK “majors,” such as the Royal International Air Tattoo or Farnborough Air Shows. Other static visitors were the Danish Air Force with some more F-16 examples who have been regular visitors to the base over recent months conducting exercises with the Leuchars’ Squadrons. The final F-16 examples were supplied by the Norwegian Air Force, which again, all credit due to the Air Show organizers for pulling in the not so common Air Forces.

The RAF static display was made up of various aircraft ranging from the base Tornado F.3’s; examples from all three of Leuchars Squadrons; to the “slightly larger,” E-3D Sentry (AWACS) aircraft. The Royal Navy and Army were also in attendance with their own helicopters; Merlin HM1, Lynx and Gazelle AH1 to name a few. Civilian aircraft from local flying clubs and private owners also attend for the static display to create interest for various projects and to allow the public to see what is happening in their area regarding flying clubs and such like. 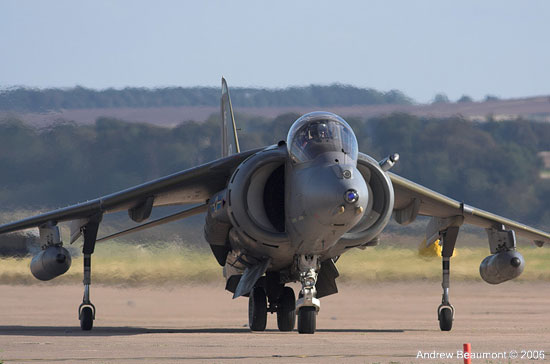 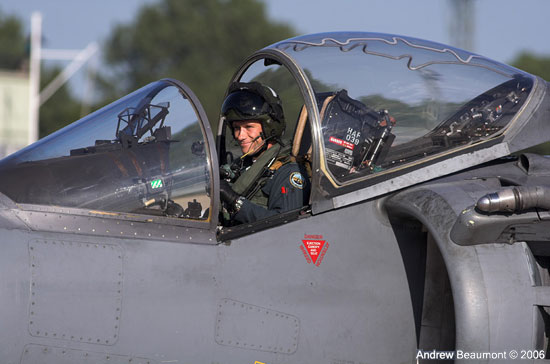 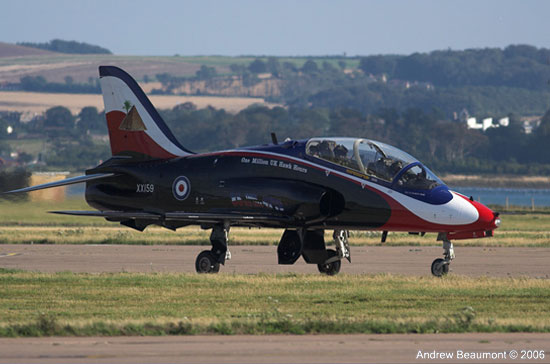 Back to the Flying Display, the show would include the increasingly impressive Eurofighter Typhoon flown by Squadron Leader Matt Elliot, who has been the RAF’s Typhoon display pilot for the last two Air Show seasons. I have seen this aircraft performing for a few years now but every year it gets more impressive as the development of the aircraft continues. The RAF now has 3 operational Squadrons flying the Typhoon, No.17 (R), No.29 (OCU) and most recently No.3(F) Squadron converting to the Typhoon from Harrier GR.7’s in April 2006; the first Front Line Squadron to receive the Typhoon. In 2003, No.17 Squadron became the first RAF Squadron to receive the Eurofighter Typhoon. Based at BAE Systems Warton airfield, its responsibilities were to evaluate the new aircraft and its integration into full squadron service. In 2005 the Squadron officially formed at RAF Coningsby to be become 17 (Reserve) Squadron, the Operational Evaluation Unit. No.29 Squadron flew Tornado F.3’s up until 1998 when it was disbanded. The Squadron reformed in 2003 when it was officially made the Operational Conversion Unit for the Typhoon, training the Air and Ground Crews who will later fly and work with the new aircraft. No.29 (OCU) with No.17 (Reserve) Squadron’s are now both operating out of RAF Coningsby in Lincolnshire. 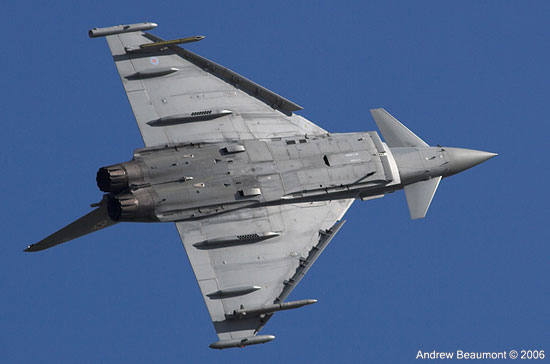 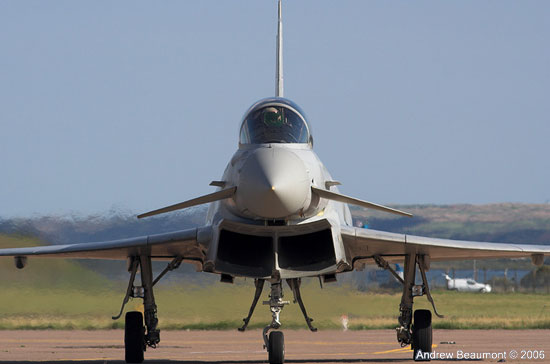 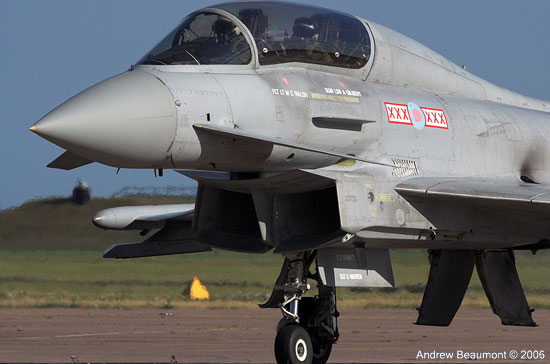 Other RAF displays included the World Famous Red Arrows Display Team marking the Teams 4000th Display; a display by the Chinook HC2; a jaw dropping display that has won many Air Show awards since it came back onto the circuit only a few years ago; plus many others.

A display that is unique to Leuchars and brings some excitement to the show is the Tactical Demonstration by the RAF but more on that later. Of course the Battle of Britain Memorial Flight will arrive in full force with the Avro Lancaster, Supermarine Spitfire, Hawker Hurricane and the Douglas DC-3 performing. The final display worth mentioning at this point is the Diamond 9 Formation performed by 56(R) and 43(F) Squadrons from RAF Leuchars. This formation is to celebrate the 90th Anniversaries of both Squadrons this year with Aircraft and Aircrew from both squadrons performing. Again this is another unique display to Leuchars and very rarely seen done by Front Line aircraft anywhere in the UK.

Back to the Arrivals

The Friday morning usually sees the majority of the Aircraft arriving while the afternoon is set aside to put the finishing touches to the flying display. This year it was slightly different. The traffic into the Air Base was rather quite slow during the morning but with the beautiful weather I don’t think that bothered anybody. There were lots of flypasts to woo the crowd inside the base and also the crowd gathering outside the fence on the “mound” over looking the base. I spent most of the morning at the main enclosure taking photos of the arriving aircraft as they pulled off runway 27 towards the VAS or up to their static position. After a very enjoyable lunch I spent a couple of hours at the other enclosure and captured the Saab Supporters — Danish Baby Blues Display Team, an F-15E and 2 Tornado GR.4’s from No.14 Squadron. We were also treated to a practice display by the De Havilland Vampire which is operated by Air Atlantique’s Classic Flight; a very energetic display by an aircraft that both 56(R) and 43(F) Squadrons flew during the early 50’s. 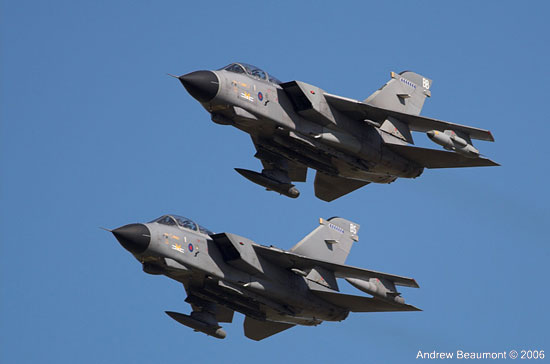 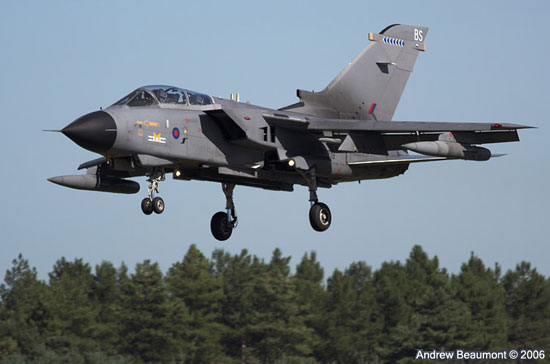 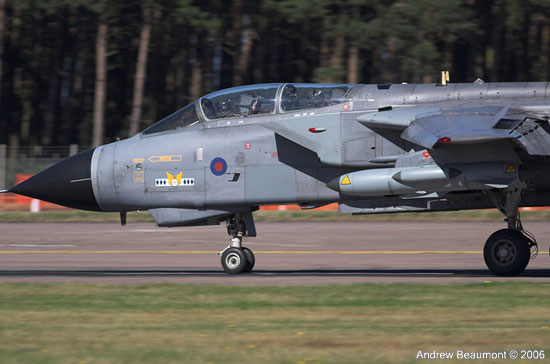 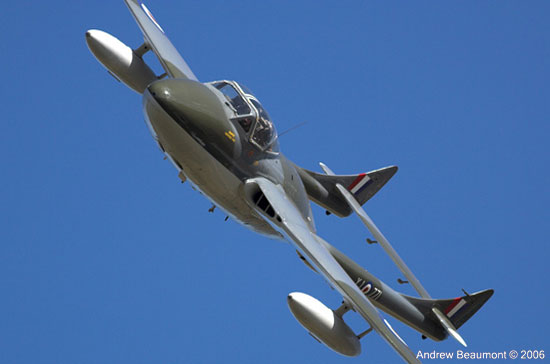 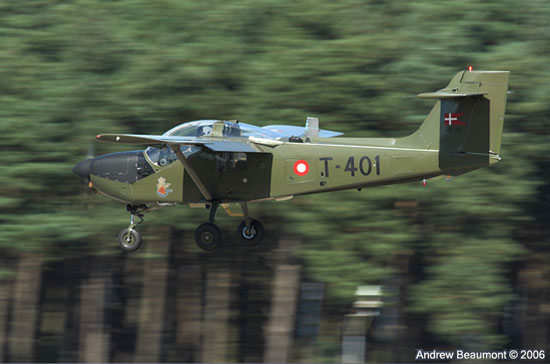 The next part of my day was something I’ve been looking forward to all year and very few people ever get the chance to do. As with last year, the Air Show organizers offered limited places to those on the Enthusiast Package, at an additional cost, to have a go on the Tornado F.3 simulator used to train the Air Crew on the base.