During last years Air Show weekend, both my brother and I had our first ever flight in the Tornado F.3 simulator at RAF Leuchars. The sim is quite easily older than me but it has been upgraded with a new visual package and a new instructor station in the last couple of years. Last years flight was an experience I’ll never forget but this year’s flight was looking to be a bit more special.

My brother had his flight before me; he is the one pictured in the photos below inside the cockpit with one of the Instructors. I could have sat in the back seat whilst he was flying but my view would have been restricted so I opted to sit in the separate room with the Instructors. 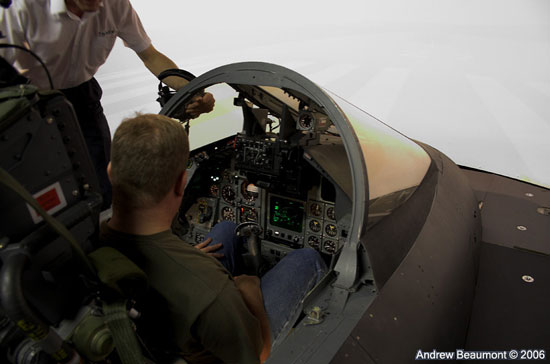 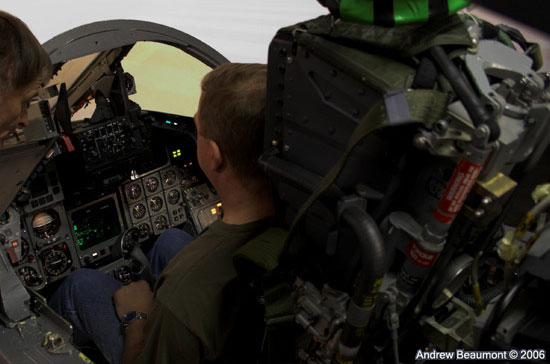 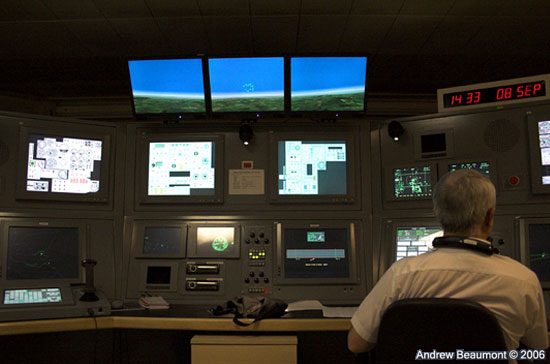 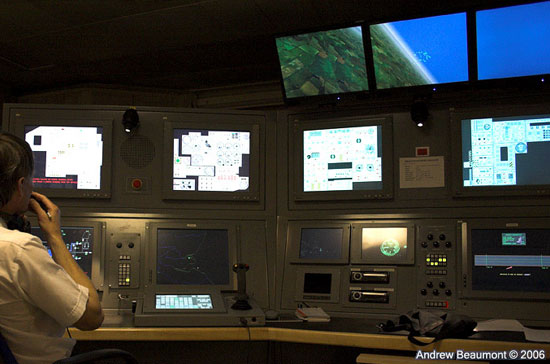 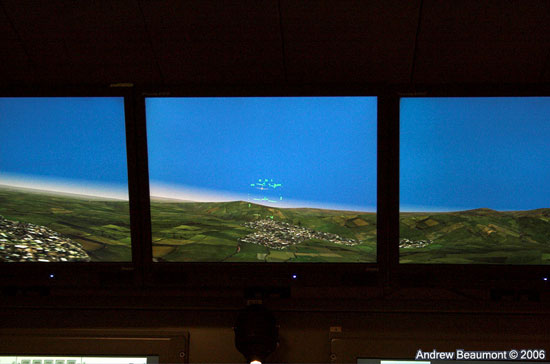 Now it was my turn. I climbed in, made myself comfortable and put on the headset. I familiarized myself with my surroundings. My first thoughts last year sitting there was how cramped it felt but this year I felt I had a lot more room to move around.

The instructors had my brother land and turn the aircraft around at the end of the runway to save time resetting the sim which can take up to 15 minutes. This gave me a little extra flying time that I certainly wasn’t going to complain about.

After a quick brief on what I was going to be doing, I was instructed to start my take-off run. I pushed the throttles forward, waiting a few seconds for the engines to spool up and away I went. I wasn’t quite aligned up on the runway so I had to use a little rudder movement to straighten myself up. And the words of the Instructor kept ringing in my ear, “Only use very slight movements on the rudder.” And he was right! I pushed a little too much to the left and the aircraft jolted across the runway, luckily I managed to correct it and in only a few seconds I was airborne in a Tornado F.3!

My first task was to head out to sea, low level. No problems there. During last years flight the instructors got us to fly UNDER the road and rail bridge that cross the Firth of Forth just outside Edinburgh. That was loads of fun but last year I made a bit of a meal of it. This year we were tasked to do the same but I was determined to make a better job of it.

I got my headings from the Instructor and followed his cues. I had to make a right turn heading back towards land and started to see the bridges in the distance. I was already flying around 200 ft when I was instructed to lower the nose to go even lower. I leveled off at around 40 ft and using the trim held her steady whilst also applying full reheat. I had to make a slight left turn to avoid a small hill on the coast before I was clear to fly under the bridges. I made my pass and kept her low across the Forth River heading towards Sterling.

Suddenly I have a VC-10 air-to-air tanker flying just ahead of me, to my right and at the same altitude. I was instructed to fly alongside the VC-10’s right wing. I banked to my right and pulled the throttles back to idle to drop off some 200 knots extra I was doing compared to the Tanker. I made a left hand bank to position myself beside the right hand wing of the Tanker and we fly straight and level for a few miles before the VC-10 went into a hill! The VC-10 didn’t crash but carried on through the hill and out the other end whilst I had to take a bit more of an evasive maneuver!

I was then given a heading to Scotland’s West Coast where all the pilots in the RAF would go to train in the low level environment. Low Level training is an essential part of the pilots training and with Scotland’s terrain and population density; it is an idea place for it. Because of my experience with the sim from last year I was allowed to fly freely through the valleys and around the hills of the west coast. The visuals are nothing like, say LOMAC, but certainly impressive and seemed rather accurate regarding the terrain detail. I was allowed to increase to over Mach 1 as I was flying through the valleys which gave me extra work on the stick to maneuver around the hills and valleys. The force feedback on the controls was very impressive and exponentially increased with your increasing speed replicating the G forces that would be encountered in real life.

My last task before heading back to base was to try a few aerobatic maneuvers. The instructor made me do a left and right hand barrel roll to get a feel for the roll rate of the aircraft before talking me through the process of doing a loop. I was instructed to increase my speed and climb to 2000ft whilst he spoke to me through the headset.

“Right, what I want you to do is when I say, pull the throttles back to idle and then on my cue you have to pull as hard as you can on the stick, you got that?”

What I wasn’t expecting was the actual force I had to pull on that stick! I pulled as hard as I could, pushed the throttles forward when told to and also tried to keep the nose straight as the aircraft was trying to pull to the left. Close to the top of the loop I had to use both hands to get it over due to the shear force counteracting my movements and then once my nose was heading towards the ground, I finished the maneuver; leveled her off and let out a “phew!”

He was right, it wasn’t as easy as you expect. Usually a simple maneuver done daily by us simmers on our PC’s!

I was now making my way back to Leuchars following the headings the Instructor gave me. Around 12 miles out from touch down, I was given a radar talk down onto the Glide Slope and onto the ground by the Nav Instructor similar to what a real RAF pilot would get from ATC after a mission. This was a great touch to an awesome experience. The following print outs are what I received of my approach and landing onto runway 09 at RAF Leuchars.

What an incredible experience! 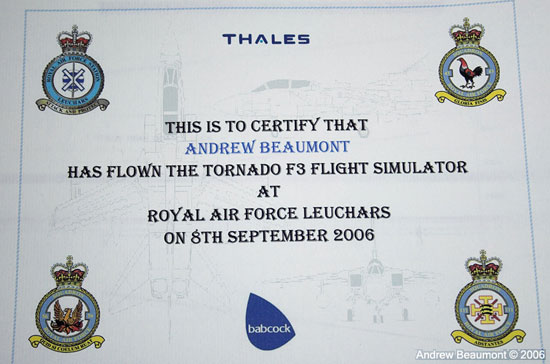 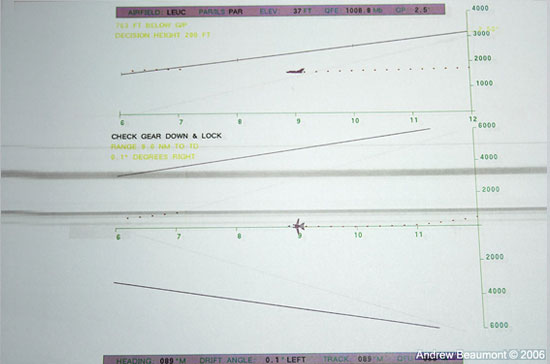 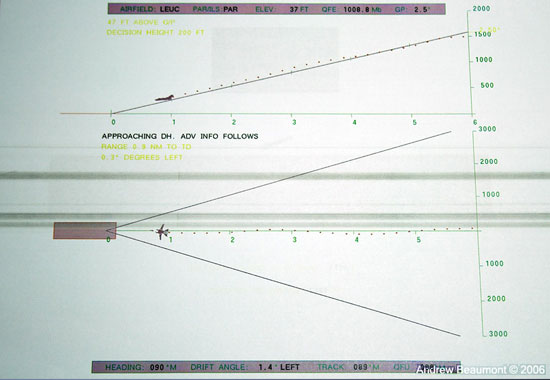 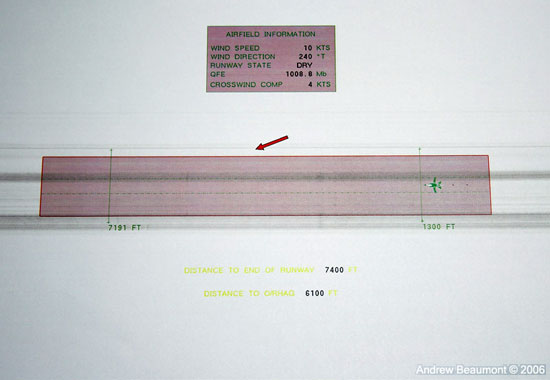