We complete our discussion with Oleg Maddox with questions on version compatibility, the IL-2 series future, and some news about “Storm of War: Battle of Britain”

A: To play “IL-2 Sturmovik: 1946” you will need both Pe-2 and “Sturmoviks Over Manchuria” installed to keep online compatibility.

Q: A follow-up question. What’s the effect on the online compatibility? Right now the online community is split between v4.04 and v4.05 (Standard and Pe-2 expansion).

A: That’s why we will sell the DVD with the sim itself and the complete 3 add-ons as the one product. Even if you have all previous or Pe-2, this version would be the nicest to buy (and most economic variant for user). So together with downloads from Ubisoft, we will probably cover all groups of interests.

A: Of course. We won’t force anyone to buy the new add-ons. If people won’t buy the latest add-ons, they’ll stay with the previous versions. However, whether a lot of those people will be seen online, is doubtful.

For example, when “Pacific Fighters” came out, even the ETO-oriented players bought it and upgraded for online compatibility even though they were not interested in any PTO planes. The same, I expect, will happen here.

Q: Has direct support of the IL-2 series from 1C: Maddox ended?

A: I would not say that it is ended. I would say that we will spend 99% of time on SoW:BoB.

Q: The community has enjoyed riding the “gravy train” of free upgrades with enhancements to the FM / DM, new objects, maps, and aircraft throughout the journey from the original IL-2 up through the “merged” simulation. Has the train pulled into the station for the last time?

A: See above. There is a plan to release some third party add-on(s) with new default skins for large amount of aircraft, some new objects and maps, after the last from us, the 1946 will be released.

Q: Is the “outsourcing” of the simulation to RRG Studios the modality for keeping the sim alive now that 1C: Maddox has moved on to the Storm of War series of flight simulations?

A: RRG is also working on a new standalone sim based on BoB’s next-gen engine.

Q: Does RRG Studios have a monopoly on expanding the franchise?

A: Not at all. But they are most experienced, if to speak about modeling and work with us.

Q: Are the expansions a way of keeping interest in the present flight sim series in order to ensure both interest and brand loyalty?

A: Yes, it is one of the ways to keep interest to the series and to keep community strong and to be ready for the new series, that will begin with SoW:BoB.

Q: The 1946 add-on seems to be moving the IL-2 series closer towards early jets. Is there a possibility of a Korean War add-on on the distant horizon?

A: On BoB engine. At the moment no more questions please… 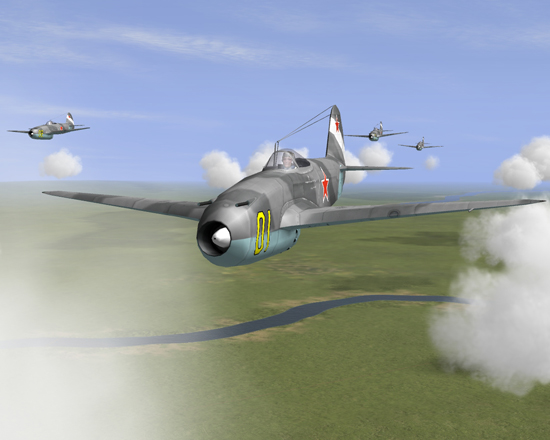