After running around looking at FSX with all the detail sliders set to the maximum I had to face reality and drop them back to more medium detail settings to continue with the review and reach acceptable frames-per-second. Performance in FSX has been and will continue to be a hot-button topic among the online community. I’ll start off by saying that I have found performance within FSX that balances outstanding graphics with smooth frame rates. The key to FSX satisfaction is experimentation and patience; there is no other way around it. There are so many different options and settings to adjust and modify that you can spend hours testing different configurations to find the right balance. I’ll leave it to the community hardware and software gurus to lead you in the right direction on that. There is a ton of information out there that will help you maximize your performance using a variety of methods and techniques.

A nice feature of FSX is the ability to adjust your display characteristics and then save the configuration settings to a file so that you can easily swap out configurations that best suit your desires. For instance, if you are going to fly in a particularly scenery dense area such as one of the major cities or high-detailed airports, you might want to set some features a bit lower. If you are going to fly at an outlying regional or rural airport however, you might be able to get away with much higher settings. I also found that if I just wanted to shoot instrument approaches in hard IFR conditions that turning down VFR type graphics boosted my frame rates and my instrument gauge update rates tremendously. The ability to quickly flip-flop to preset configurations is a real bonus. 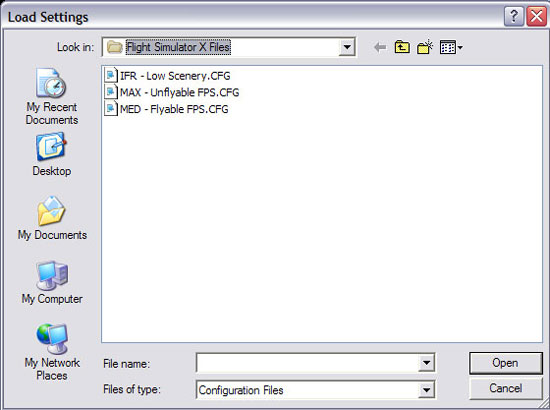 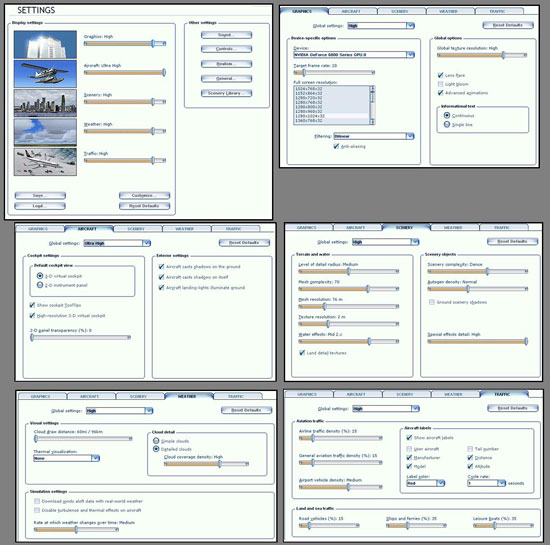 One interesting observation I made was that “acceptable” frame-rates seem to vary widely across the spectrum of the community. Had you asked me prior to FSX what I thought an acceptable FPS was I’d have guessed somewhere around 30 FPS. Imagine my surprise (after hours and hours of flying FSX and experimenting with settings) when I found that I could fly with what I considered totally acceptable frame-rates down to about 13 FPS. Obviously higher is better, and I regularly saw 20+ outside of metro areas, but my settings and performance with FPS in the teens was fine. I seriously doubt that such low FPS would be acceptable for a combat flight simulator where the maneuvers and action are much faster paced, but for tooling around in FSX I had no problems. All of that said, I realize that the “average” computer out there probably doesn’t have 2 gigs of RAM or a 256 or 512 MB graphics card. Had I bought FSX and been flying it on a mid-range system I think I would have been severely disappointed in the inability to at least match FS9’s level of detail without suffering from poor FPS. I don’t think it is fair to say that FSX is the best thing ever, or the worst piece of crap put on the shelf. I believe that your level of satisfaction will vary according to your hardware, perception, and expectations. FSX, on my machine at least, looks better and flies better than FS9. I don’t know if my experience is the exception to the rule or if the “squeaky wheels” (with legitimate concerns) are simply getting the most attention.