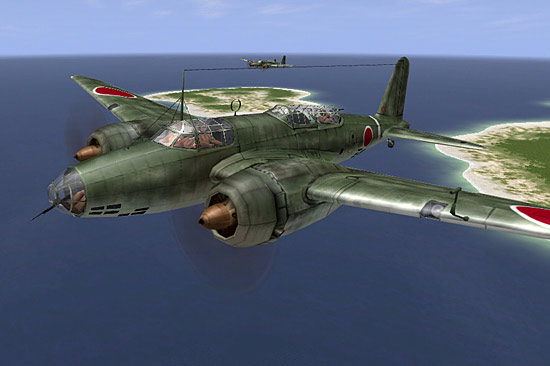 There is little doubt that Oleg Maddox’s IL-2 Sturmovik will go down as one of the classics of simulation; and of video games as well. This game, originally designed to be a study sim of just one aircraft, the IL-2 Sturmovik ground attack aircraft. What this game has morphed into is a survey simulation covering over a hundred different aircraft types from over eight different countries.

I first saw this title back in June of 2000, when it was originally going to be released under the BlueByte label. Back then, there were only about five aircraft in the game. In six and a half years the game has been re-released in several different forms but the basic core game is still the same. If you fired-up the original IL-2 from 2001 and the latest version of Pacific Fighters you can still get the feel that made the original release a classic.

The original IL-2 became Forgotten Battles which added the Aces Expansion Pack which later added Pacific Fighters to become what is considered by many to be the Fighter Anthology of WWII aviation.

This year brings what should be the final official chapter to the IL-2 series with IL-2: 1946. The five year old series now comes to an end. Few games of any type have had the following the IL-2 series has had. Possibly the only flight simulation that has had a similar run is European Air War, but it never had the support the IL-2 series has enjoyed.

I have had the opportunity to play the final version, IL-2: 1946. It is considered the definitive collection of the title. The reviewer’s DVD that I received contained the entire series including IL-2 Forgotten Battles / Aces Expansion / Pacific Fighters (IL-2:FB / AEP / PF) and the Pe-2 add-on. In addition, two new series, IL-2: Sturmoviks 1946 and Sturmoviks over Manchuria are included in the DVD. I understand that in the near future there will be the ability to purchase an upgrade to 1946 “standards” via Internet download.

So, what is there in this game that makes it significantly different from the original games of the series? It is a viable question and one hopefully I can answer in this review.

Unlike in the past, IL-2: 1946 now comes only on DVD-ROM. This makes installation much easier since there is now only one disk needed to install the entire setup. Most fliers of the series know that in the past to get to a complete IL-2: PF status you would have to install a series of five different CDs over several different series of installations to get to a complete install. If you add the Pe-2 add-on and the 1946 download you could easily be looking at five different, separate installs to get to the final product.

This is something to consider for those folks, like myself, who have IL-2:FB / AEP / PF installs currently on their computer. I am not sure yet if Pe-2 will be included in the 1946 download, but if you have to get that version separately you will have to store and protect what could be up to seven or eight different CDs / DVDs once you get everything copied onto semi-permanent media. If you upgrade your computer you will have to endure the joy of installing these disks again onto your system.

Or you can buy one DVD-ROM package.

It will probably be a choice of convenience vs. expense for most people, although the DVD is currently being sold on GoGamer.com for $40.00. Not a bad price for the media content available. In addition, titles are shipping in Europe that have DVD content covering the development of Oleg’s next title, Storm of War: Battle of Britain. The choice will be personal but something that should be considered for owners of the current series up through Pacific Fighters.