For the purpose of this article…teaching you how to use the gunsights in today’s sims…there are two classes or types of LCOSS…disturbed reticle and director.  The following discussion will emphasize the traditional ‘gyro’ or displaced reticle sight. Most of our sims use this type of LCOSS.  A few do not.  They use the director type of LCOSS.  Flanker 2 and Janes F/A-18 are good examples of the director type of sight system.  Specific operational details of these two types of LCOSS will be covered in Part Three.  For now, let’s just concern ourselves with the basic operating principles of each type of sight.

As with the fixed sight, we’ll keep in mind that the key to understanding how these sights function lies in how much that sight type ‘knows’ about the target.  This issue of target info underlies the difference between the two sight types.  These two sight types are as different as night and day. Here is this difference in a nutshell:

The director sight uses movement of the target to predict a course for the pilot to fly to get the rounds fired to hit the target.  A director sight requires a very large amount of target info to operate properly.

Basic operating principle – disturbed reticle LCOSS
Back in WW2, as fighter speeds continued to increase, it was becoming more and more difficult to get hits with a fixed sight.  In particular, the fixed sight was a poor aiming device for the high speed, high G turning engagements that were common once the battle was joined.  The question was raised, “How can we show the pilot what his rounds are doing while he is turning?”  The reasoning was that if the pilot knew where his gunfire was going, he then could maneuver to get the target to the same place. In our sims, tracers are used to show the bullet stream, as this next screenshot illustrates. 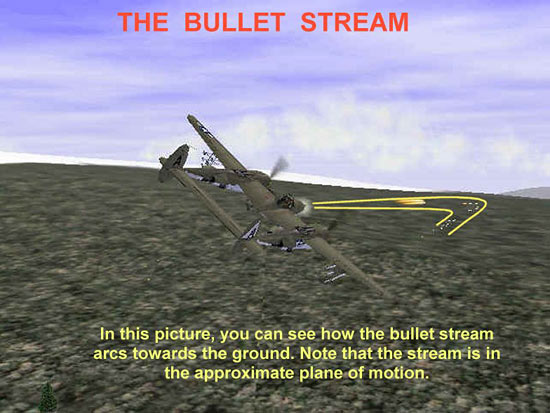 So good minds went to work.  They began with the idea that the gun line and the nose of the aircraft were relatively close together.  Since the nose of the aircraft can be seen as moving across the sky as the aircraft turns, it then became clear that the gun line must also be moving across the sky.  In fact, practical experience in firing long bursts of tracers had long since demonstrated this.  The problem boiled down to how to show this ‘tracer path’ to the pilot in a usable form.

The answer was found in the unique properties of gyroscopes…once spun up, they tend to want to stay in place.  If a force is applied to move them, they respond by precessing in a predictable manner.  Someone asked, “‘What if this force is aircraft G?  What will the gyro do?”  And the answer was that the gyro would precess in a predictable manner and to a predictable degree. Voila’.  All they had to do was to wire up the gyro so that it would send electrical signals that described its position.  Now, when a force was applied to the gyro, it would precess and that precession could be measured.  The precession had a direction and a magnitude…the greater the force, the larger the precession.

The neat part of this is that the gyro precessed opposite the direction of turn…exactly opposite.  It was recognized that this precession was in fact in the plane of motion of the fighter.  They already knew the tracer path was in the same plane of motion.  Bingo!!  The precessing gyro produced a movable sight image that mimicked the behavior of the bullet path in a turn. 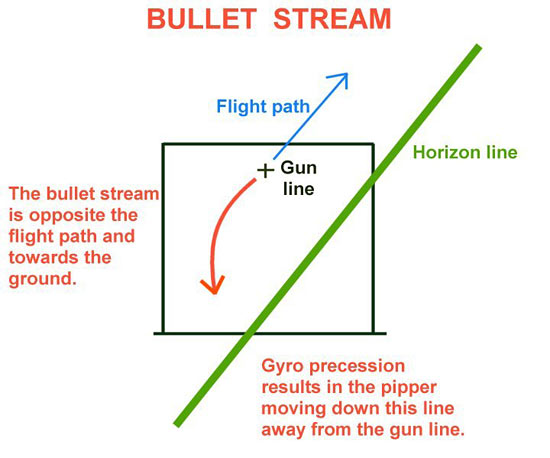 Boy, they were hot on the track of a reliable gunsight at this point.  The gyro precession gave them a way to, in effect, draw an imaginary tracer path on the combining glass.  The only problem was that the tracer path went off into the boonies somewhere…it was hard to know how far away the rounds were at any point along the precession path. 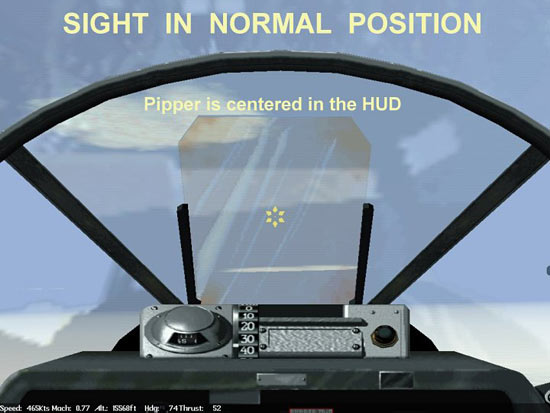 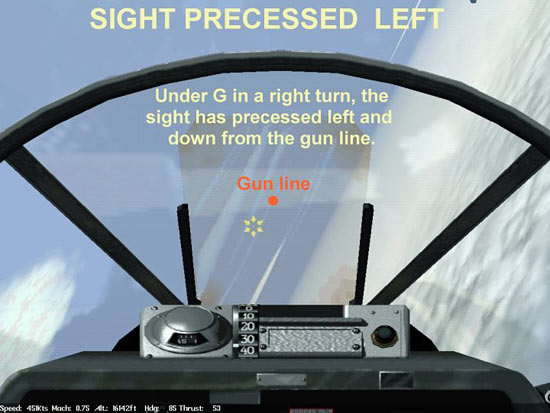 The result was a sighting reference that demonstrated bullet behavior under G at a given range.  All the pilot had to do was to get the target to fly under the pipper when the bullets were there also and, BOOM!!, he had a kill!!  But, as you may suspect, it wasn’t quite that easy.  There were some gotcha’s to be overcome.  We’ll call these the inherent LCOSS errors.