Inherent problems in early disturbed reticle LCOSS
There were immediate problems when the first LCOSS gunsights were introduced in WW2.  The first problem area was the acceptance of the system by pilots and aircraft maintenance personnel.  The system was mechanically complicated and required careful and exact maintenance by trained technicians.  This was not often available.  The system was delicate and easily damaged resulting in a LCOSS calculation that was inaccurate.  Lastly, the system was challenging to use and demanded a relatively high level of pilot training…and this was often not the case in the war.  As a result, the sight got mixed reviews from its pilots, with many refusing to use it…they went back to the fixed sight mode that they were familiar with.

The second problem area had to do with the estimation of target range.  The sights were calibrated for a selected range.  If the pilot was not at that range, then the sight was ‘lying’ to him, and the firing solution would again be inaccurate.  Hand in hand with target range was the issue of closure speeds. T he first LCOSS sights were built with the assumption that the attacker and target were co-speed, in other words, no closure.  This was often not the case.  If the attacker had considerable closure, then that changed the bullet TOF which then made the LCOSS calculation be in error.  The result was again a pipper that did not represent actual bullet position for the assumed range.

The third problem has to do with how long it takes a LCOSS computer to crank the numbers and arrive at a solution.  This problem is inherent in all LCOSS regardless of their level of technology.  As the pilot turns and the G’s increase, the LCOSS computer is busy generating the sight image position along the path of gyro precession.  But this takes time…typically up to about one half second or more. The pilot must take this time…known as ‘settling time’…into account.  This means that the pilot must give the sight a chance to ‘settle’ (stabilize) before he can count on the display being reliable.  Picture the pilot pulling the pipper up to a target. Just as the pipper reaches the target, let’s freeze the picture.  What do we see?  We see the pipper on the target. But…and it’s a big but…the picture is not yet reliable. T he pilot must now hold the pipper on the target for the duration of the settling time. Then, and only then, is the sight picture reliable.  Remember…the sight responds to aircraft G.  Change the G, and you must reset the settling time clock.  This is a hard and fast rule and one that has led to more missed firing opportunities than God has little green apples!  The next figure is a cartoon taken from the USAF P-51 operating manual advising pilots to remember settling time. 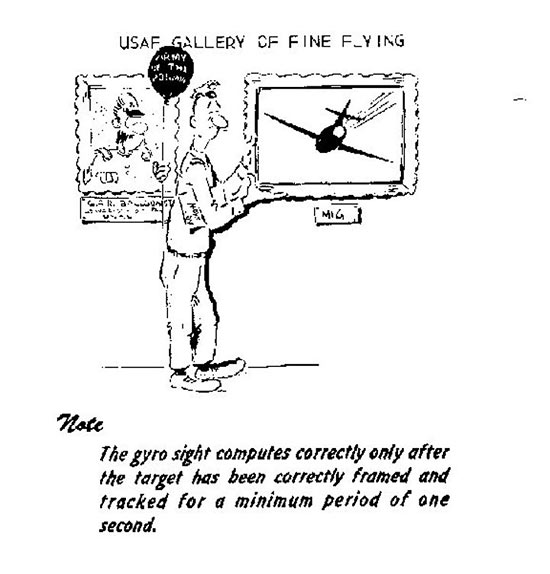 But what if your favorite sim is Flanker 2?  It has a director gunsight.  Is it different than the disturbed reticle type sight…and, if so, how and why?

Basic operating principle – director sight LCOSS
Let’s get right to the heart of the matter.  A director sight needs much more info on target behavior than does the disturbed reticle sight.  So much so, that the director gunsight must have a radar lock on the target in order to function properly.  When it comes to target info, the disturbed reticle sight is content with knowing target range.  Not so for the director sight.  This sight needs to know where the target is now and where is it going.

Both types of sights compute bullet ballistics the same.  The disturbed reticle sight takes the ballistic data, combines it with aircraft pitch and roll inputs, and then computes a picture of what the bullet path looks like.  Essentially, the disturbed reticle sight says to the pilot, “Here’s what the bullets are doing…now it is up to you to get the target to fly into this area.” 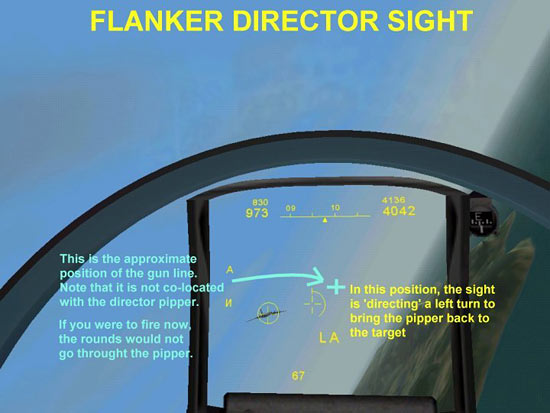 When it comes to gunsights, the director sight is about as ‘magic’ as it gets.  In theory, the sight does all the lead and gravity drop computations that the pilot needs.  All the pilot has to do is to get the pipper over the target to kill it.

LCOSS Implementation
This section pertains to both types of LCOSS sights.  This section could be subtitled, “What do I need to make the sight work?”

When it comes to implementation, I want you to remember ‘The Big Three’…in plane…in range…and in time.  Get these right, and you stand a good chance of downing your target.  Get one or more wrong, and you might as well take up knitting!

OK…so how do we use this thing to get a hit?  We’ll get to the specifics later.  For now, we just need to know that the sight is most effective if we accomplish the three items above.  First, you want to get in plane with the target.  That is where BFM comes into the equation.  As we approach our target, we maneuver in three dimensions to reduce our aspect and angle off to end up behind the target. In doing so, we get into its plane of motion.  The importance of the ‘plane of motion’ will be explained in the next section.

Now, having gotten into the target’s plane of motion, we want to get into range.  By this point in our discussion, I think we’ve said enough about the significance of range, so I’ll move on to the last of the ‘big three’…the idea of ‘time’.

The ‘time’ that I am referring to, of course, is the settling time that the sight needs to arrive at a correct aiming solution.  You must maintain a steady platform so that the LCOSS computer can do its job.  You maneuver so that you can maintain the target under the pipper for the duration of the settling time and the required TOF.  Do that, and the predicted bullet position (pipper) and the target should occupy the same space.  But if you don’t allow the sight to settle and you don’t maintain a constant G while the sight is computing the numbers, then you are going to miss.  Guaranteed.

So much for the basic LCOSS theory.  As you may suspect, there are some ‘what ifs’ and ‘yeah buts’ to what I’ve said…but the meat of the matter has been covered.  Our typical sim LCOSS will work just fine if you follow the guidelines above.  It’s time to wrap up Part Two and move on to Part Three.  Next time, we’ll take our three types of sights and suggest ways of using them in our sims. 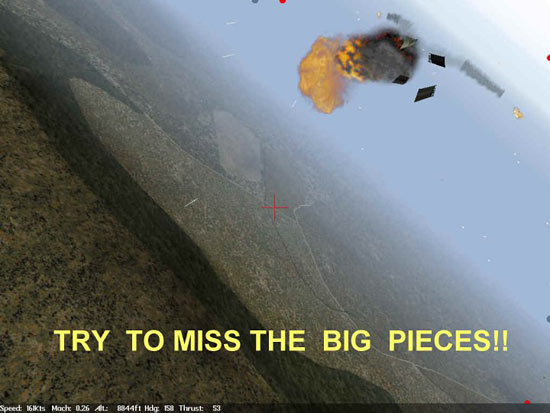 Don’t Fly Through The Target Debris!!