“Wolf 20, you’ve got gomers in the tree line two clicks west of the big S bend in the north/south road. Target elevation is 500 feet. Light to medium small arm to 23mm. Friendlies are east of the road in the hootches. Run in north to south with an east pull off. Best bail out is anywhere east of the hootches. I’m holding over the hootches at 2000 feet. “Acknowledge restrictions“. This translates as enemy troops (gomers) hiding in the trees about two kilometers (2 clicks) west of the road. Enemy defenses include small arms fire (rifle and machine gun) and 23mm cannon. The good guys are in the village (hootches). The FAC has restricted the fighters to an attack axis of about 180 degrees magnetic heading with a turn to the left (east) during the pull off the target. He has told the fighters that he is at 2000 feet altitude and is orbiting over the village, and he has asked for a confirmation of the attack heading. Wolf lead responds with, “Copy that, run in north to south”. Each flight member answers the same in turn.

With this info in mind, the F-4 leader now briefs his flight. Most of the procedures were covered in the mission briefing back in the squadron. Now, the lead sends the flight into trail formation and establishes an orbit at 10,000 feet to the east of the target area. He asks for and receives confirmation from each aircraft that both crewmembers have identified the correct landmarks marking the target area. He then calls, “One’s ready”. Since the flight is the only one on this frequency, the lead can dispense with the need to include the word “Wolf” in each call. Each flight members calls ready in turn. In this relatively low intensity environment, the F-4s are orbiting over the friendly area and will attack one at a time. 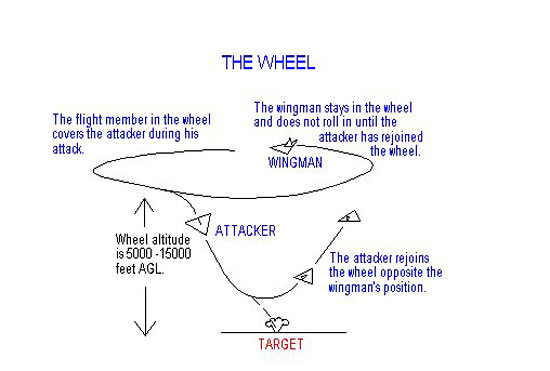 Wolf lead begins his attack with a descending turn towards the target. He rolls into about 135 degrees of bank and calls, “One’s in from the north”. The FAC clears the pilot for the attack, “In sight, cleared hot“. The FAC must have the fighter in sight, and he has cleared him to release weapons(cleared hot). Lead pushes the throttles up to military (100% throttle but not in afterburner) and pulls the nose of the aircraft down towards the target area. 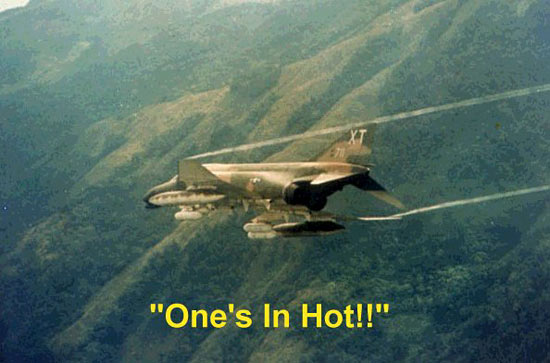 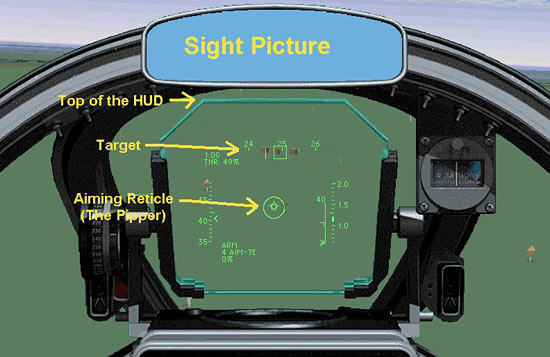 A quick glance at his airspeed indicator tells him to pull the throttles back to about idle to hold the desired dive airspeed. Next, he checks his attitude indicator to note his dive angle. He has a little less than desired. To correct for this error, he will have to press a bit beforepickle ( press – descend below planned release altitude, pickle – pushing the bomb release button. Note: all dive attacks are planned for a specific dive angle, airspeed, and release altitude. If the pilot is off his planned dive angle or not at his desired release airspeed, he will adjust the release altitude to correct for the error). In the dive, lead holds his aiming point steady and watches the pipper moving up to the target. All this time, the GIB has been calling out altitudes. The planned release altitude is 6000’. As the lead is checking his airspeed and dive angle, he hears the GIB saying, “Nine thousand, eight thousand…”. Lead compares these altitude calls to the rate at which the pipper is moving up to the target. In a perfect pass, the GIB will call “Pickle” just as the pipper reaches the target, but life is seldom perfect, and today is no exception. The GIB continues, “Seven thousand, ready, pickle”, as his altimeter unwinds to 6000’. But there is no reassuring “thump” as the bombs release from the bomb racks. Instead, the GIB hears his pilot grunt, “Pressing”. Before the GIB can think to ask how much or why, he feels the bombs release and is pushed down into his seat as the pilot pulls six g’s in the pull off. 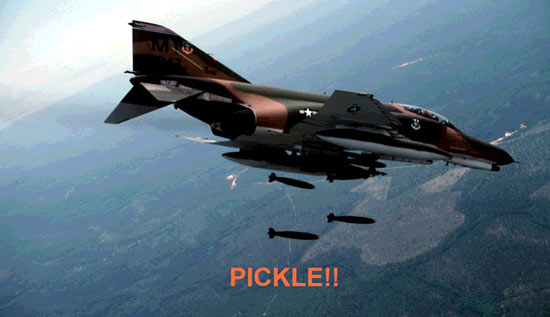 In the climb back to orbit altitude, the lead calls to the flight, “Headwind. Don’t get shallow“. Shallow means that Lead had less than his desired dive angle…this will probably affect his bombing accuracy. Lead’s call clues the other pilots to adjust their attacks to counter the unexpected wind. The formation spacing allows about twenty seconds between individual attacks, and gives the FAC a chance to note the bomb impact point and call out corrections to the next attacker. “A little short, Lead. Two, hit 100 meters south of one’s bomb“. The FAC is telling the number two F-4 to aim at a point 100 meters south of where the leader’s bombs landed.The headwind has caused Lead’s bombs to land in front (short) of the target . In this manner, the FAC will “walk” the weapons on to the enemy. The number two pilot acknowledges and calls, “Two’s in hot from the north”. Two’s bombs walk further into the tree line. “Good bombs, Two”, Nail radios…”Three and Four, hit Two’s mark”. For the next few minutes, Nail continues to work Wolf flight all along the tree line. At one point, a bright flash is seen that leaves a dirty, black plume of smoke rising from the trees. “POL“, Wolf lead says to himself (POL – petroleum/oil/lubricants – a term for inflammable combustibles…this time probably a gasoline supply truck.)