Wolf lead now looks at his map, notes the position of the MiGs and approximates an intercept heading from his present position. Wolf flight is now at 15,000 feet and doing about 550 KIAS.

“Wolf, fence check.” Wolf is telling his flight to make sure that their weapons switches are set up for a/a missiles. At this point the arming switch is still off. By now, Wolf has passed Cherry 08 and is pressing deeper into North Vietnam.

“Wolf 21 has a contact ten right for 60, slightly low, 900 knots.” Wolf Two has a radar contact ten degrees right of the flight at 60nm. The relative closure is 900 knots…this means a head on set up. The anxiety level goes through the roof as Wolf flight struggles with the problem…is this head on target Dodge flight or the MiGs?

“Cherry, Dodge, heading south, gimme a hold down.“ The flight of F-105s is now in radio range and clearly needing help…the tone of the voice makes everyone’s hair stand up. The F-105 leader is asking the tanker to press his radio transmit button for a few seconds…the Thud leader will use his radio direction finding instrument to display a heading to the tanker.

Cricket tells Wolf that the radar contact is probably Dodge…the positions match up. That doesn’t satisfy lead. He wants more assurance. “GIBs…get me breakout.” He wants the backseaters to try and fine tune their scope presentations to ‘breakout’ the individual aircraft in the radar return.

“Dodge, Cricket, snap 200, climb to base plus 10. You have Wolf at your 1:30 clearing your six.” Cricket now tells Dodge to fly a heading of 200 degrees and climb to the altitude of ‘base plus ten.’ In order to keep the bad guys guessing, actual altitudes are never used. Instead, the freq card includes the base altitude for the day…today it is 10,000.’ Dodge then adds 10 to that altitude and continues his climb to 20,000 feet. His hold down bearing and Cricket’s heading are close…the lead turns his flight slightly right to the new heading. Once on that heading, he spreads his formation out and tells the other pilots to focus their lookout to their six o’clock. By widening the spacing on his flight, the Thud leader maximizes the flight’s ability to clear their six. He’s aware of Red Crown’s MiG warning…he’s in a race to the south and is using the F-105’s legendary speed to keep the MiGs out of his lunch.

In Figure 7, you will see why Dodge lead ordered his flight to increase their formation spacing. In the F-105 and F-4, a pilot’s ability to look back is limited by the seat and canopy design. Most pilots found that they could not see the area within 30 degrees of their six o’clock…unless they really strained, this was their ‘blind cone.’ The lookback angle in the diagram represents a 60 degree angle behind our wingline. We can use a little simple math to then determine where that lookback line crosses the other aircraft’s six o’clock. Next, we factor typical missile range into the picture…in this case, a value of one to two nautical miles is about right. Having done that, it’s pretty clear why a 500 foot spacing would not be advantageous in a missile environment. But, if we increase our spacing to 6,000 feet, then we move our lookback point to around a mile and a half (10,000’)…much better when it comes to checking six for MiGs. 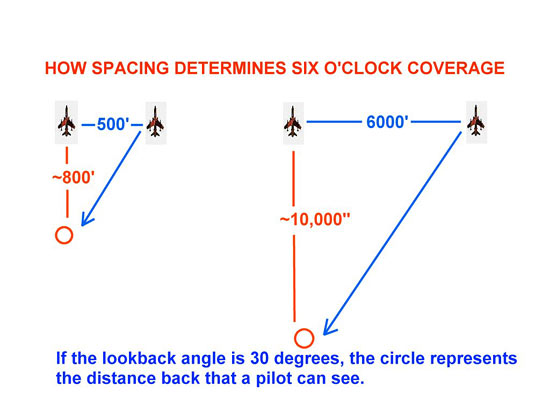 Meanwhile, Wolf flight is looking hard into their radars. Another Bogey Dope call to Red Crown confirms that the MiGs are still chasing the F-105s and gives their position relative to Bullseye. Lead compares this to his known position and then matches that up to the radar return. The radar range of the return and the estimated range of the MiGs do not match…the return has to be the Thuds…but lead needs more info before he is ready to make that call. “Two has the contact as a four ship.” Once again, the backseater in #2 has earned his pay. He’s ‘broken out’ the radar return into four separate blips…this confirms the return as Dodge flight. Relief washes over Wolf flight. Now they know where the good guys are. It’s time to get serious about locating the bad guys. The F-4 flight breaks radar lock on Dodge and focuses their radars on Red Crown’s last bandit position.

So, who is this GIB in #2 who has been doing such good work? He is a grizzled old major on his second tour, and he’s about to do some more. He’s flying with Lt. Fuzz, who has been in country for three weeks. A former Bear, the GIB talks reassuringly to his inexperienced front seater as he works the gain control to fine tune out the ground return while slowly adjusting the elevation. “Gotcha!,” he mutters as he moves the range gate over the return slowly emerging out of the clutter (Tour – tour of duty in the war…usually a year. In Country – assigned to a base in Southeast Asia. Bear – a backseater in a Wild Weasel…usually carries around his family jewels in a wheel barrow. Gain and elevation – adjustments to the radar picture…the GIB is tuning out the static caused by the ground returns…a skill that comes only from years of experience. Range gate – the lock on symbol on the radar scope).

Well, folks, Wolf is about to reach out and touch someone. Our story continues with the emphasis being placed on how the flight members support each other in air to air combat. In the coming engagement, please note the attention given to which flight member is attacking and which is defending. In the real world, air combat procedures include something called “The Engaged Fighter (EF) / Supporting Fighter (SF) Contract.” This contract is a set of rules and procedures that govern how a flight deconflicts itself when maneuvering against one or more bandits. It turns out that the “furball” that you all have heard of is a bit more structured than it may at first seem. Here in very abbreviated form are the essentials of that contract:

So much for the guts of the relationship between the flight members…let’s get back to business here with Wolf flight. To quickly recap, Wolf flight is sweeping the six o’clock of Dodge flight as that flight of F-105s is trying to reach the tanker. The backseater in Wolf 21 has the first radar contact.