Despite what we usually see in today’s sims, the ability to put our weapon on target is not quite the ‘piece of cake’ that it appears to be. If sim AI realism continues to improve (and there is no reason to expect that it will not), you may well have to take the following factors into consideration. While sim air to ground is still pretty much at the ‘no brainer’ level of development, you can take the upcoming material ‘to the bank.’ When we begin a bomb, rocket, or strafe pass, the success of that attack, and potentially our subsequent survival, will depend on whether or not we satisfy these factors. Let’s get to it!

Frag Envelope
When it detonates, each air to ground weapon has a unique explosive pattern. The larger the weapon, the bigger the pattern. The ‘frag’ that we are referring to is the scattering of the bits and pieces of the weapon body. Not surprisingly, bombs have a much larger frag pattern than rockets or strafe. For example, after a 500 lb. bomb explodes, there are several hundred pounds of shredded metal flying through the airspace above and around the explosion. You do not want to occupy the same airspace as this frag!

Consequently, we make an input in our weapon release planning to take this pattern into account. The following diagram shows a typical frag pattern, and the accompanying table sets out frag parameter values. Please note that the pattern is bounded vertically and laterally in feet, and by duration in seconds. 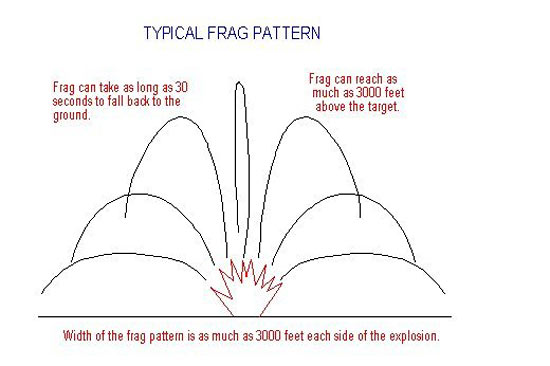 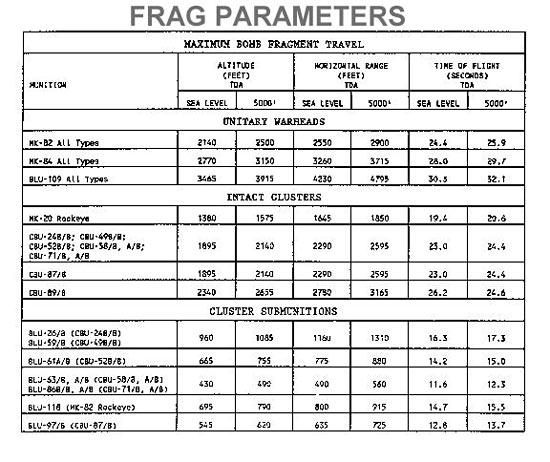 In our weapon delivery attack, we honor these frag values by overflying the target above the highest altitude or by turning to miss the lateral boundary. In certain cases we can also fly a flight path that is timed so as to not enter the frag pattern area until the frag has all fallen back to the ground.

Several factors directly impact how the frag pattern affects our flight path. These are weapon time of flight (TOF), release airspeed, release dive angle, fuse functioning time, and whether or not the release is single or ripple.

Time Of Flight
The significance of the weapon TOF lies in the separation needed between the pilot and the weapon when it goes off. The more time that a pilot has to put some distance between himself and the weapon explosion, the better. The shorter the TOF, the more aggressive the pilot must be in his post-release maneuvering. This is usually implemented as a high-g pullout to gain as much altitude as possible before the weapon goes off.

Release Airspeed
This factor goes hand in hand with TOF. High release speeds in dive deliveries result in shorter TOF. Since high threat target area defenses mandate high attack speeds, short TOF are much more the rule than the exception. Increasing airspeed affects the danger of the frag pattern in one other way…as airspeed goes up, so does the aircraft’s turn radius for a given amount of G. Typically this results in more altitude lost in the recovery than is desired. To offset this problem, the pilot increases his release altitude.

Release Dive Angle
Further complicating the need to avoid the frag pattern is the dive angle of the attack flight path. A diving flight path at release reduces weapon TOF and adds to the altitude lost in the pullout. A diving attack is often desired in attack planning…it improves target acquisition and reduces aiming errors, but pilots must always be aware of its drawbacks with regard to frag pattern deconfliction.

Fuse Functioning Time
It would ruin your day to have your bomb explode right after you dropped it! For that reason, the bomb fuse has a setting that lets you determine the time that it takes after release before the weapon is ‘hot.’ Since this period of time may add to the TOF, it must also be taken into consideration.

Single or Ripple Weapon Release
During a multiple weapon (ripple) release, the aircraft continues along its flight path as the weapons are coming off. As such, the pilot is delayed in beginning his pull out maneuver. Because of this delay, ripple releases require higher release altitudes to give the pilot the chance to avoid the frag of the first weapon to detonate.

OK!! That pretty much covers the main factors that affect our choice of release point. Please note that the only release parameter that we have mentioned so far has been altitude. That is because it is by far the most common parameter…but it is not the only one. In the simulation from which Figure 2 came from, the only release parameter is getting the pipper on the target. In fact, this is the primary parameter in many simulations. In the following discussion, we’ll see why that may not be the case after all.