Weapon Ballistics Effects Due To Gravity

Well folks…remember Sir Isaac Newton? He’s the guy that had the apple fall on his head, or something like that. He didn’t know it, but Sir Isaac has been making life miserable for us air to mud pukes ever since.

Here’s the problem in a nutshell. Picture yourself motoring along (level or in a dive…it makes no difference). You pickle off your weapon and begin your pull out. The big question becomes…where is that puppy going to land? Figure 5 depicts the bomb fall line of a weapon as it falls to earth. 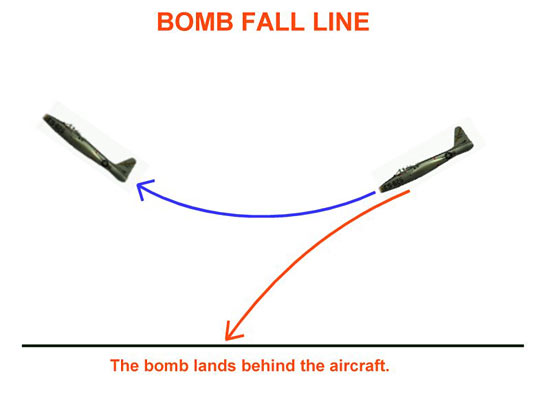 Let’s stop for a second and cover some more terminology. We use clock positions to describe where a weapon lands. We orient the clock so that our flight path extends from six o’clock to the twelve o’clock position. The 3/9 line of the clock defines whether the bomb lands ‘short’ (before the 3/9 line) or ‘long’ (past the 3/9 line). Dare I say it…the 6/12 line determines the right or left of the impact point!! 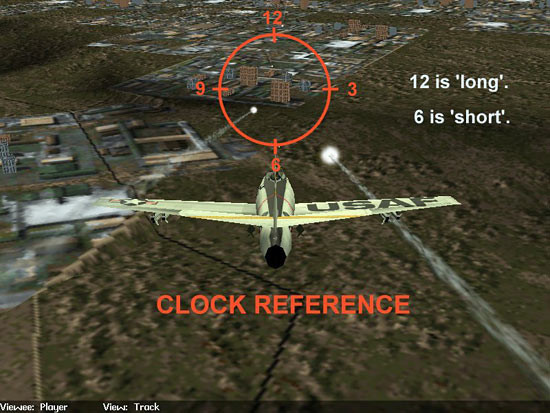 OK! So, now we can label a weapon impact point as being short/long or right/left of the intended target. This obvious fact leads directly to a not-so-obvious next question. What made the weapon miss? Easy!! Flight path and release point errors!!

Flight path errors are the easiest to explain and correct. When I say ‘flight path’ in this context, I’m talking about your ground track as you fly over the target. When we release the weapon, our aircraft has a particular vector. At the moment of release, we can project that vector forward along the ground. If we did not turn, that line on the ground can be thought of as our future flight path. For our purposes, I’ll assume the weapon drops directly under our aircraft and is not affected by any forces during its fall. Our projected flight path line then becomes the line that the weapon will land on…somewhere. At the moment of release, then, we ask ourselves…is that line going through the target? Or is it passing the target off to one side or the other? If it isn’t going dead center through the intended target, then we have a flight path error! In Figure 7, let’s say you intend to bomb the first truck in the convoy, but for whatever reason, you end up with a flight path to the right of what you need. 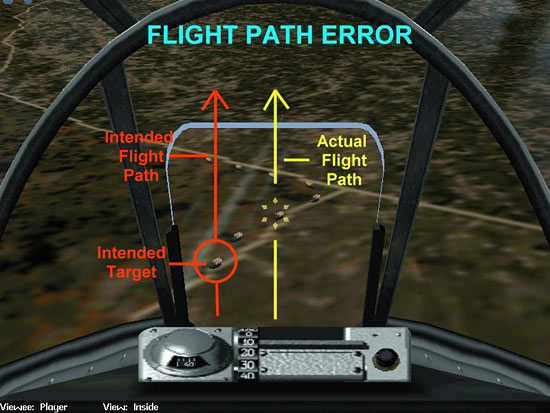 Guess who the guilty party is? You are!! In the real world, we teach new fighter pilots that lesson number one is fly your behind over the target!! Fortunately, most of us are fairly decent at getting this parameter down, so flight path (right/left) error are the lesser of the two types of errors.