That leaves us with the subject of release point errors…and, incidentally, the underlying subject of this article. First, a quick explanation of why these errors are the larger of the two. Think of it this way…as you approach your target, you bank left or right to get lined up with it. You may not nail it perfectly, but you get pretty close. If your heading is off by a degree or two, the resulting ground track error will be small…and by small, I mean on the order of less than 100 feet. Now, we consider the actual release point…the point at which you mash the pickle button. Errors here are one of two kinds…either you pickle too soon or too late. These are timing errors rather than heading errors, and it’s the issue of time that causes the problem. What if you are one second late in your decision to release the weapon? That weapon is going to land a distance equal to one second’s flight time past the target…and that can be a long way!! For example, let’s say we were doing 500 knots at release. That bomb is going to hit as much as 700 feet or so past the target. Whoa!! Now that’s a miss!! Fortunately, most release errors are not that large, but the point remains that release errors tend to be much larger than flight path errors. 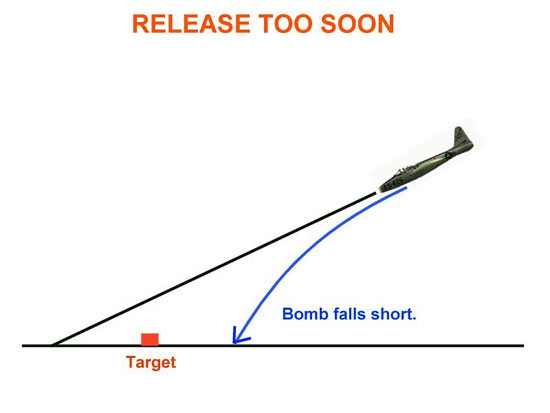 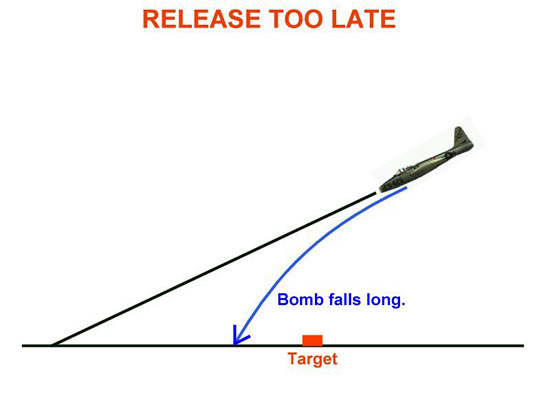 Before I move on, let me restate what we just covered. If you miss your target, most likely it will be due to a release point error. Flight path errors are relatively easy to recognize and correct. Not so with release point errors. They are not easy to see or correct, and they may result in large miss distances. In the next section, we are going to look at the relationship of where your aircraft is aimed to where the weapon will land. We’ll conclude with a discussion of how to deal with the situation where we do not meet our desired delivery parameters.

How Gravity Makes Life Hard For the Attack Pilot!

The next part of our discussion centers on weapon ballistics and is the heart and soul of weapon delivery. Please take the time to make sure you understand this material cold. The following figure shows us what happens to a weapon’s trajectory during its TOF. We will illustrate the situation with a dive delivery for simplicity. Picture yourself in a dive. Your projected flight path intersects the ground at what we will refer to as your ‘crash point.’ 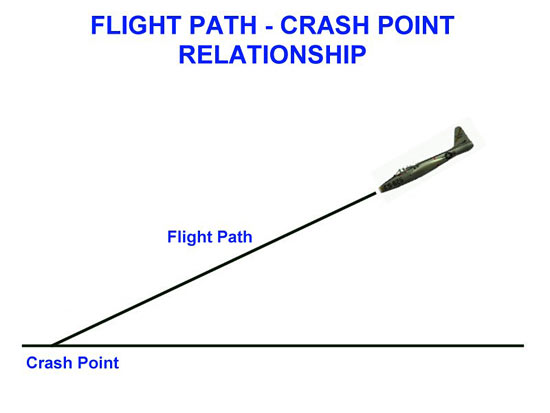 At some distance above the ground (release altitude), you pickle off your bomb. Sir Isaac takes over from here. The weapon continues along the flight path that your aircraft was on at release. But, because of gravity, it also picks up a downward vector. This downward vector changes the weapon’s ballistics, and when the weapon impacts the ground, it does so at a point behind your aircraft. This effect is magnified by the height of the release point. For a free falling weapon, your ‘crash point’ and the weapon impact point are never the same. 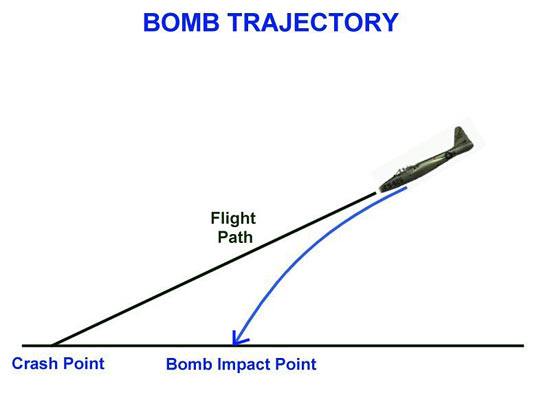