Once again let’s refer back to Figure11. Now, we’ll put our interest on the ‘crash point.’..that point on the ground where our flight path is aimed. We now know that point is somewhere at the target’s 12 o’clock. But where, exactly? And how do we determine where this is? Is this value expressed in feet, mils, or what?

Actually, if you were to do the computations, the answer is ‘all of the above’, for, in fact, you can define the crash point in both feet and mils. For right now, this is not a big deal for what we are trying to understand. Instead, let’s focus for a moment on that crash point. That expression is a tad unscientific, so I’ll come up with another one. The point at which the aircraft flight path intersects the ground will be known forever more as the ‘aim off point’ (AOP). The words literally mean that point at which the pilot aims away or ‘off’ from the target…in this case somewhere at the 12 o’clock of the target. When expressed in feet, amazingly enough, that distance is known as the aim off distance (AOD)!! 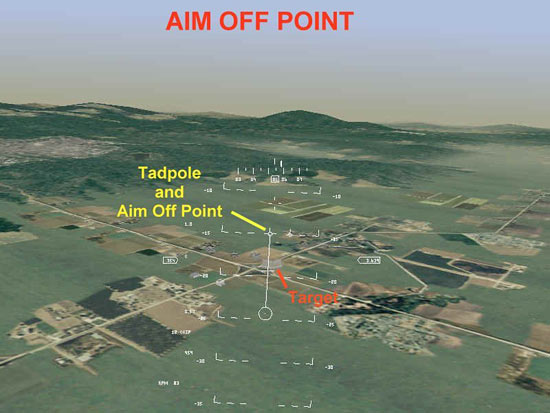 This is written in stone. The AOP never changes from the time you initially roll out in your dive until you release your weapon. Once you have established yourself in your dive, you have committed yourself to an aim off point. The significance of the AOP position is critical. The placement of the AOP determines the magnitude of the dive angle…wrong AOP, wrong dive angle. The placement of the AOP affects the distance that the bomb falls (bomb range) relative to the target…wrong AOP and the bomb lands short or long of the target.

All right!! I know this has been a bunch to digest…let me explain how it all ties together. To do that, I’m going to ask Sir Isaac to once again join in the discussion. He’ll begin by showing how ballistic theory defines bomb range. Then I’ll step in and relate that to what we see in our HUD. I’ll also cover briefly the importance of delivery parameters since that subject is the closing part of this article. Here we go…

Unlike the apple that fell on Newton’s head, our weapons have a forward velocity when they are released…a bomb has the aircraft’s velocity while rockets and gunfire add to that velocity with their own propellant. We remember from our science courses that velocity has both a magnitude and a direction. Therefore, a bomb is released with the aircraft’s speed and flight path vector. In addition, the bomb has a height above ground value. Figure 19 is a diagram intended to show a free-fall weapon immediately after release with the emphasis on the release parameters. 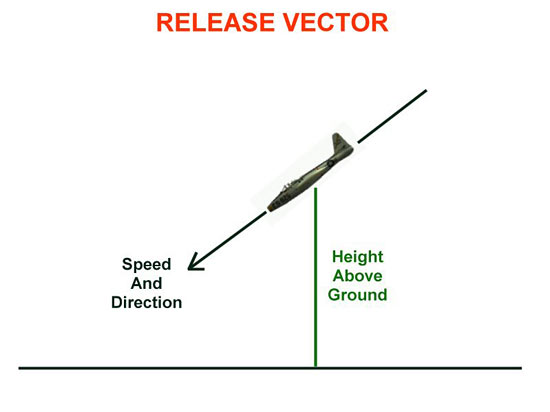 Our example assumes the release vector is directed at the ground at a shallow angle, as it would be for an aircraft in a dive. The next figure shows the weapon impact on the ground. The distance from the point of release to the impact is called bomb range. 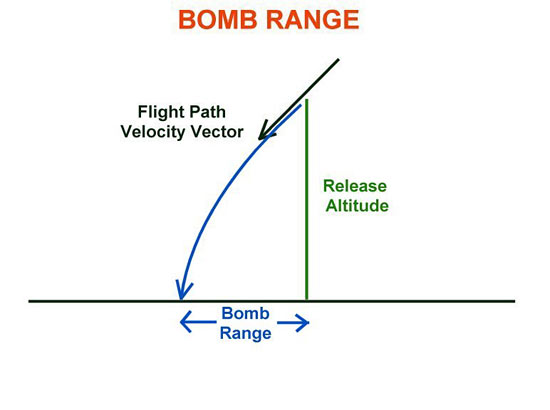 Now, we remove the bomb flight path and create a triangle using the release point (air), release point (ground), and impact point. We also include the original release vector. 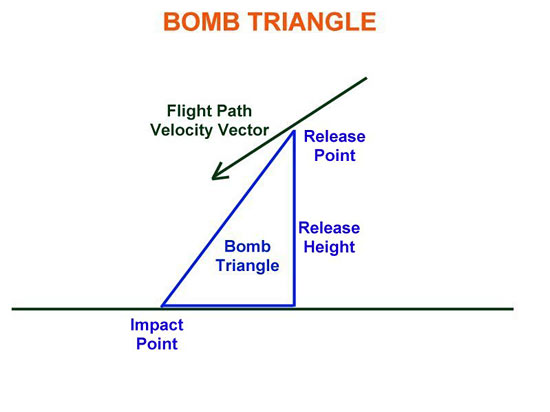 We now have everything we need to present a simplified explanation of how a mil setting is computed. Your understanding of this math process is a major step in understanding manual bombing. By knowing the theory that goes into a mil setting, you are much better equipped to put the bomb on target.

Let’s go back to our earlier discussion where we referred to sight depression angle. If we take Figure 21 and overlay it with our aircraft, a target, and an extended flight path, all becomes clear. The angle between the flight path and the bomb line is the sight depression angle. This angle, when converted to mils, becomes our gunsight mil setting. 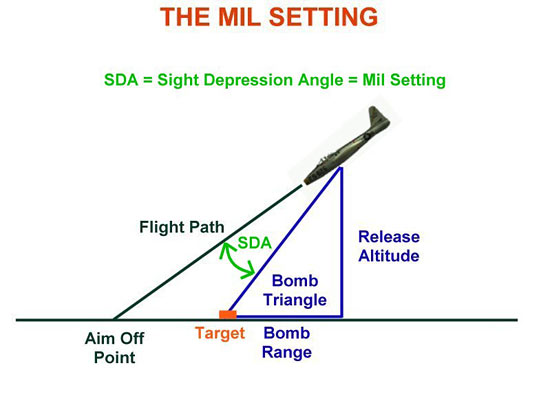 Since we humans are seldom perfect, attaining perfect dive bombing parameters will probably be the exception rather than the rule. We usually will have to make some sort of correction to our weapon release point due to airspeed, flight path (AOP), or other errors. This correction is known as error analysis.