The Components of a Typical Dive Bomb Pass

There are a number of different dive bomb attack profiles…box pattern, wheel, curvilinear, pop up…it doesn’t matter…regardless of the profile, we begin the maneuver with a turn towards the target. Usually, this is a descending turn, and when this turn is complete, we end up with our nose pointed in the direction of the target. At this point, we roll wings level, accelerate, if needed, to our release airspeed, and release our weapon when the pipper gets to our aim point (the release point). The initial wings level point is known as the roll out point, and the distance from the roll out point to the release point is the final. The descending turn is referred to as the roll in. This discussion will be based on the most basic of the gunnery patterns, the conventional box pattern. In the box pattern, the roll in is begun from the base leg. Here’s what these components look like: 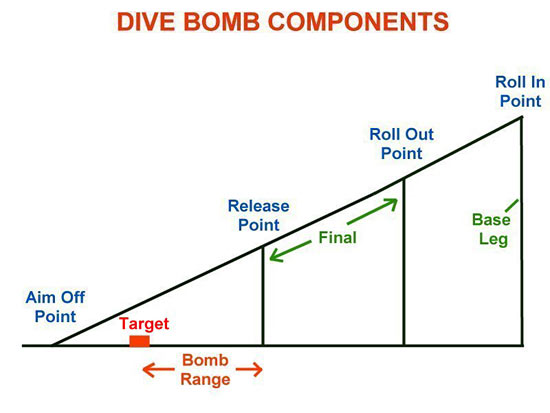 Our basic task is to roll in, point the nose, roll out, and then fly down our desired dive angle to our release point. Sounds simple in theory…it’s the execution that is the problem! Let’s take each step, one at a time.

We’ll begin by explaining that the dive bomb pass is a sum of several parts. To understand the whole, we need to break the pass down into its components. Let’s start by reversing the order of the items to be discussed. We’ll start with the release point and then move backwards from there, showing how each new part of the dive bomb pass builds upon the last. The next figure shows the components of the pass as individual triangles…the release triangle was already covered in Part One. Now we add the final and the roll in triangles. I’m showing them to you as triangles so that you can see that each triangle has a ground distance leg and an altitude leg. It is these legs that we are going to be concerned with. By summing them up, we work our way back to the roll in point…in doing so, we will see that the roll in point is a specific distance and altitude from the target. 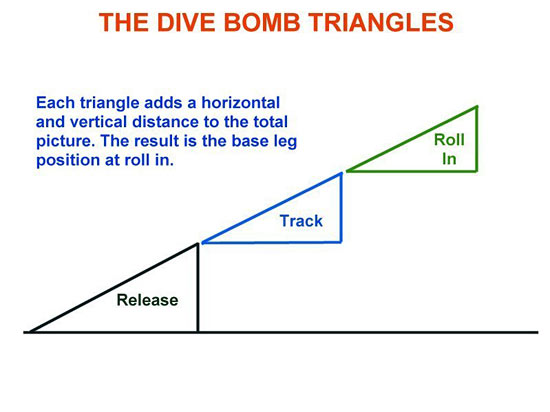 With this in mind, we must now shift our emphasis from the target to the aim off point. From now on, when we talk distances, we are referring to the distance from the AOP, not the target. This is because our triangles are based on the AOP…our target will often be ‘in the picture’ in the following discussion, but when it comes to doing the math, we keep our focus on the AOP.

The Release Point
Figure 4 shows the relationship of release altitude, pipper position, and AOP. The release point is the basis for the remaining dive bomb parameters. Since our dive angle remains constant, it is projected from the release point back up the flight path. By using the dive angle and the release altitude, we can use simple trigonometry to compute the ground leg of this triangle. We now have the first of several distance and height values that we will use in this discussion. 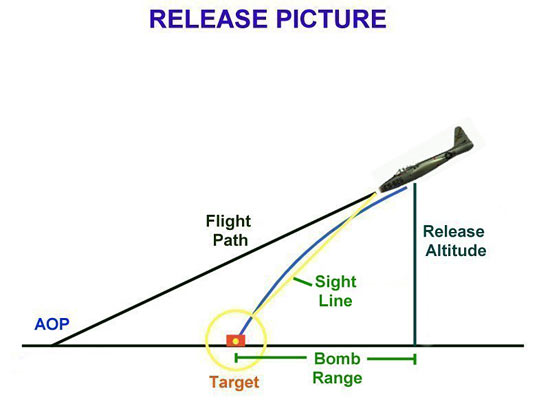