Which is one of the joys the Strike Fighters-engined series of simulations. TK and the rest of the guys at Third Wire have never tried to deny the obvious. This sim is about fun. But, the biggest present under tree we’ve opened is the nearly open-source feel of the whole she-bang. This is one simulation that’s literally open to interpretation.

This is the first report in a new series about the mods and add-ons for Third Wire’s popular flight sims. 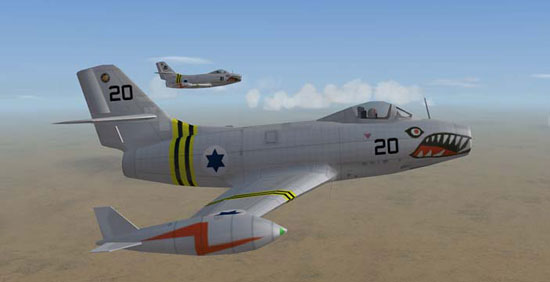 The ’56 Suez Crisis Mod:
It’s Kinda Like Korea, But With Sand

One of the first mods we wanted to look at was Johan217’s ’56 Suez Crisis campaign from his larger Middle East Wars v1.0 Campaign Pack.  While the other two campaigns were great and dealt with the historical aspects of the conflicts of the Six-Day War and the War of Yom Kippur very well, the representation of the Suez Crisis was a standout product, and it wasn’t even his first choice.

“At first, I only wanted to adapt WolfmanDK’s Yom Kippur campaign — which itself was a rewrite of the Mideast campaign by USAFMTL, for Gepard’s excellent Israel terrain.” Johan explains, “…I thought I’d try my hand at a few more campaigns.” Johan’s work strikes a fantastic balance between gameplay and historical accuracy. “I tried my best to include the right units in the right place,” he continued, and after thumping mercilessly on the Egyptians for the better part of two weeks, I’d say the ground portion of the conflict is about as accurate as it gets.

Built around Gepard’s Israel Terrain v1.5, you can play as the IDF, the Armee L’Air, the Aeronavale’, the RAF, and the Royal Navy. If you haven’t downloaded and checked out Gepard’s adaptation of the area surrounding Israel, get it. A newer version is in development, but this effort is worth the bandwidth now. 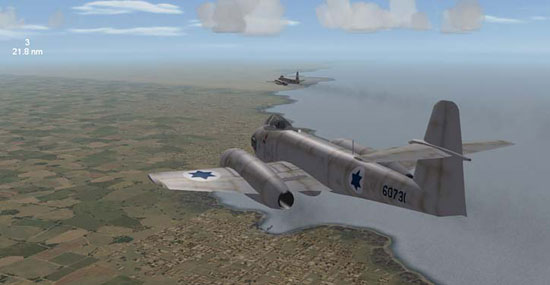 Tired of dodging radar-guided SAMs? Sick of those pesky MiG-23MF’s with Apex missiles? You’re in luck. This is old-school jet fighter combat, no ECM, no missiles, no countermeasures, just old-fashioned skill with a stick. The only way you’re finding anyone is with the trusty Mk.1 Eyeball. But, be prepared. It’s kinda like if you wrecked your Porsche and were stuck with Ford Focus as a rental. Things happen a lot slower.

What Johan did was provide you the basic framework for the campaign. You’ll have to do some hunting for the proper aircraft and ground objects if you want this thing to work. Nice thing is, he’s provided all the instructions you’ll need to get things running along with a list of everything you’ll need to download and hypertext links to each one of them.

After talking to Johan, I got the impression that he would have liked to have included all the aircraft and ground objects in one massive install, but it was impractical for him to do so. With varying download speeds, I’d agree. Plus, it makes it easier for you to do any .ini tweaking before importing the whole thing into your install of the Third Wire title you’re using with it. This was the hardest part of the creation, Johan admits, but he credits the forums here at SimHQ for being a wealth of ‘how-to’ information.

In the Basepack along with the campaign files, you’ll find all the .ini files to every object to bring the campaign up to the Service Pack 4 compliance, making things a lot easier for the user. Johan states in the .pdf file that contains the instructions that he’s tested it out usingWings Over Vietnam for QA purposes. Mine is in my Strike Fighters: Project 1 installation, and it runs quite nicely.

There are a few small tweaks you’ll have to do. One of the planning maps in the Israel Terrain needs to be copied and the copy needs to be resized to 2048 by 2048 in order for it to work in-game. It’s simple stuff that any copy of Photoshop Elements 2.0 can do.