How to Dive Bomb -or- Broad Side of the Barn?
What Barn?

I like to blow stuff up. Hey, who doesn’t? Well, in the virtual flight simulation world not as many as you would think. Yes, we all know that 90% of the guys out there fly most of these games so they can pretend being virtual fighter pilots. Most of the servers on Hyperfighter are taken up with virtual dogfights and the turnin’ and burnin’ is something to behold some days.

Still, if you look; and you don’t have to look hard, you can find online wars that encompass air-to-ground combat as well as air-to-air fighting. In addition games like Battleground: Europe and Aces High tend to place a larger emphasis on control of ground targets so if you are interested in online games such as these you can quickly carve out a very nice niche specializing in field suppression or ground attack.

In this series I will try to explain some simple ways to take out ground targets in various games. I plan on looking at primarily IL-2:1946, and to a lesser extent Battleground Europe and Aces High. Each game has different goals but the mission is the same. The more ground targets you kill the better your score.

Now in no way do I consider myself to be an absolute expert in this technique. Like everything, the more time you take to practice the better you will get at it. Like most virtual fliers I tend to vary between different types of missions. I may have the mood for air-to-air combat for a few months then may want to revert back to combat support and straight up ground attack at other times. Sometimes I will fly a Stuka, other times a Corsair, other times a Dauntless or a Val in some ship attack missions.

IL-2 is a great series to perform dive bombing missions. There are three dedicated dive bombers that come with the game. While the JU87 Stuka (B,D), D3A Val and SBD5 Dauntless all have their individual strengths and weaknesses the technique for attacking the target is essentially the same.

Hitting ground targets in IL-2 can be very difficult. Individual ground targets can be difficult to pick up and positioning for the attack is the key to consistently hitting targets. If you look at this picture you will see my target, a bridge surrounded by American armor. Yep, those little dots are my target. The farther out you can acquire your target the better chance you have to hit your target. Let’s take out the bridge and hopefully a few of the tanks on that bridge will go down with the span. 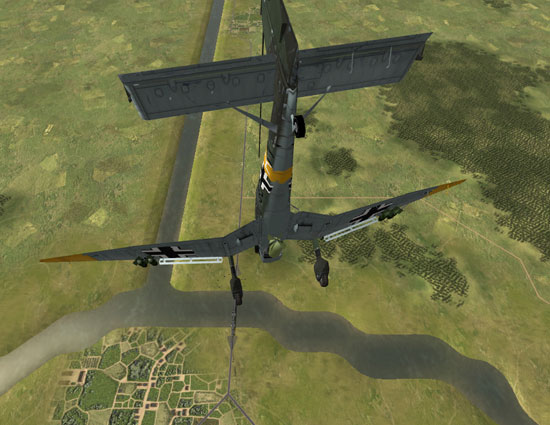 Positioning for the attack requires you to make your adjustments as far out from your target as possible. Normally I will approach a target with level flight, attempting to keep my air speed at approximately 200kph airspeed. This keeps my airspeed up high enough to make adjustments while at the same time keeping me slow enough to enter my dive without worrying about overshooting my target. 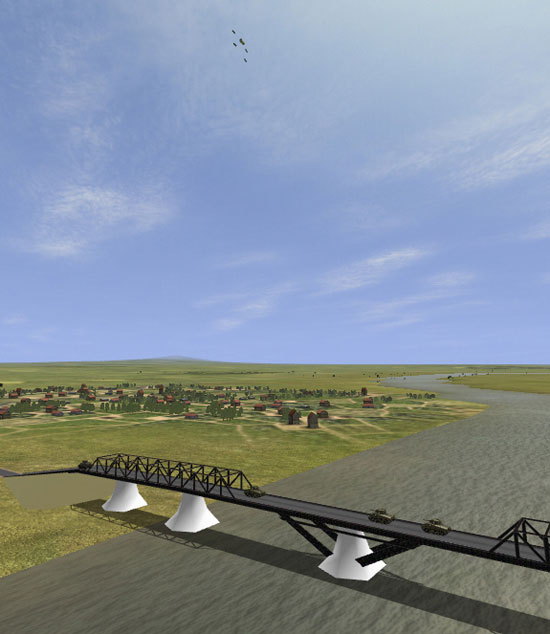