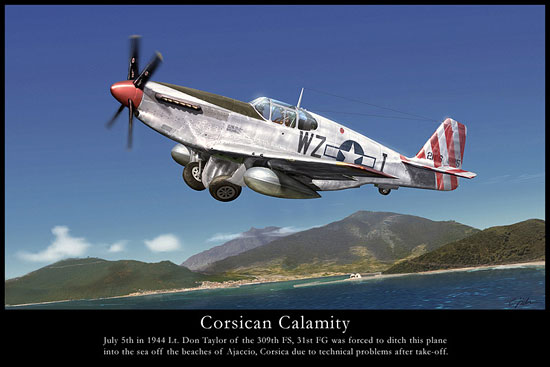 Sébastien: And lastly, Simplex took on a big challenge as I was asked by the press to get a screenshot in eight days. Simplex had it completed in seven! Another example of great teamwork as I and some others managed to collect exact data’s about Ajaccio Bay in the 1940’s. Compared to the time it took to get an accurate background, I finally had the impression that the plane’s painting was a piece of cake. Just an impression, of course! Our readers can appreciate the final result, and remember the job was done in only seven days.

Mark: Where there any photos of WZ-I in existence that the artists could refer to?

Sébastien: No Sir, we were just able to gather a few pictures of planes flown by some of Taylor’s colleagues. In particular, General Loving’s former plane, WZ-D. We know, thanks to the serial numbers, that that very plane belonged to the same ‘pack of three’ as General Loving’s ride. Therefore, we assumed they had to be very similar in appearance. We also received confirmation by Mr. Taylor himself that the plane did not have personal or victory markings. It appears that WZ-I is seen for a few milliseconds on the DVD “Wings of Legend” which is dedicated to the P-51. But we aren’t sure if it’s her. There are a few shadows on the image. For example, we can’t tell if it’s one or two yellow stripes on the wing. I must add that we don’t even know the lettering of the plane on the picture that Mr. Taylor sent to us. Even though that picture is of a high level of detail, we could not rely on it.

Mark: What impact if any did the screenshot have on the press and on the project?

Sébastien: The local newspaper is a weekly publication that is widely read, but only on our little island of 280,000 inhabitants. So they were interested at the beginning, illustrations or not. A few nice underwater pictures and the interview with the local witness would have been sufficient for them. But of course, they were happy to learn that we could provide an illustration of the plane. Originally, JesterInk’s profile was to be the picture sent for publication. But then they demanded rather a screenshot of the plane taking-off just prior to the ditching. Thus Simplex got involved with recreating the scene in the screenshot. Personally, I’m a little disappointed that Jester’s great work is not published because he did deserve it. But I think the most important thing is that both illustrations will appear on our page. Here is the real worldwide audience, isn’t it?

About how it affected the ‘project’ in general, well… a fellow diver told to me “Now that we have all that stuff, a serial number, story, pictures and so on, we don’t even need to dive anymore!” That was a joke of course. In fact, the illustration helps to contribute to give our project a new dimension. That’s something you don’t often find on other wreck-divers sites. And I can tell you I browsed a lot in the beginning. I hope it will give a “lesson” (my teacher’s side, you know) and inspire other wreck finders. They should know that the Flight Simulation Community can give more
value to their findings. To avoid them, their findings remain as rusted piles of metal often poorly shown on the web. As I wrote to Mr. Taylor speaking of our team, “Thanks to them, your plane has been identified, and will soon be carried out of the depths. Not physically at this point, but thanks to a couple of artists, who very kindly and with great enthusiasm, offered to help me to do so.”

Mark: Are there any more dives planned?

Sébastien: Yes, and that could help to answer more questions. With WZ-I being half-buried in the sand, we hope that the paint will be in a preserved condition, especially on the wings. I’m sorry I can’t say exactly when we will be able to dive on it again. But it will be soon. When this happens, the community will of course be informed, and our page updated. By the way, our material is ready and so is the team.

Mark: Are there any plans to carry this project further?

Sébastien: Many plans, as we don’t know what we will really be able to do. As there is no billionaire among us, we certainly won’t be able to tow the plane to the ground. Even if the club manages to get heavy loads surfaced (our French web site shows the Roman emperor’s statue) we don’t own a museum. And I think our Mustang would become a sad piece of rusted metal in a lost hangar. So my personal idea is to search the wreck more completely and take a lot of pictures of the process. Maybe we could take a few pieces of interest and to build a virtual museum online. We could also possibly organize an inquiry online and get suggestions from viewers.

Mark: Thank you Sébastien for a most interesting interview.

The SimHQ original release and discussion is here.

All Things in Moderation Part 2 – Back in Time Page 2