Q. Is NaturalPoint’s TrackIR “Six Degrees of Freedom” technology in the simulation?

Q. The development shots are incredibly detailed and near photorealistic. What are the projected system requirements?

A. Recommended system requirements is: Pentium 4, 3.0GHz., 1GB RAM, GeForce 6600GT with 256MB. And by-the-way, all of the sample video and graphic updates on our web site were made on such a system. Most of our office PC`s have same the configuration.

A. Yes, but after the initial release (in add-ons and patches). 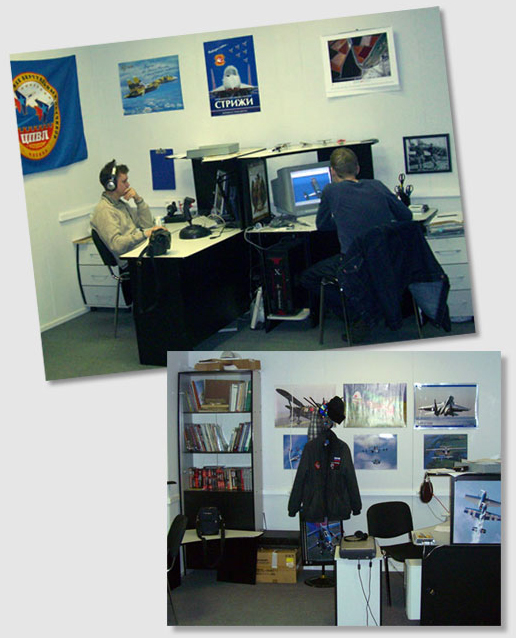 Hard at work on Knights of the Sky. Below: Somebody loves aviation!

Q. How much of the IL-2 engine (which was ultimately discarded for the new engine) translated into the current simulation engine?

Q. What elements or factors caused the team to switch to a different engine?

A. We can’t discuss this technical information but one “open” detail is: old engine. As we are going to use the latest technologies in our engine, IL-2 doesn’t support our own advanced flight and damage modeling and many other aspects.

Q. Was the decision to switch first suggested by one team member, or did all the team realize the idea at the same time?

A. It was an expertise conclusion of programming part of team, and a management decision too.

Q. Has the development team worked with or received input from WWI modders of other sims, such as the SWISSA or the OFF communities?

A. Yes, some of community members are in close touch with us, and I hope soon there will be much more of them. Thanks to everyone who have helped us!

Q. What are your thoughts on this topic?

A. Well, we got the undermeaning of your question (Starforce, eh? :D). Actually, its too early to say something about it, as its really a publisher decision, but we will try to avoid the use of Starforce because some of us, as well as many others, have had some problems with it.

Q. Will there be a way to record missions both online and offline, such as the .ntrk system in the IL-2 series?

Q. Any possibility of including an internal recorder for .avi like Eagle Dynamics has in “Lock On” and Lead-Pursuit has in “Falcon 4.0: Allied Force”?

A. Yes, such future capabilities are planned.

Finally, three humorous questions from one of our jesters on staff (“BeachAV8R”). If you like, have some “tongue-in-cheek” fun with these…

Q: Do you plan to have working MFDs and FLIR?

A. Sure, but you will just need to use some imagination. Range marks on the optic gunsight is going be a “cheap” MFD, and a Molotov cocktail in your pocket is gonna make your life “lighter”.

Q. Will there be an advanced weapons flight model?

A. Sure, you will be able to drop weapon “things” so they will fly down on enemy heads…

Q. How many GBUs can the Fokker Dr.I carry on its hardpoints?

A. Just one. But the GBU had one problem during early war days — it has no parachute, so its better to choose big, soft targets.

Thank you for answering our questions and we’ll look forward to more news on Knights of the Sky as it progresses in development.