Comments and Analysis by Chunx 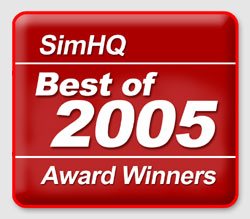 Well 2005 sure was an interesting year for the sim crowd: Sure it was a tad sparser on new commercial titles than some past years, but on the plus side there seemed to be a higher overall quality to the titles released. Like this year’s crop of major motion pictures, we saw some game titles from the past resurrected and updated into new products, with some varied levels of success. We also saw some new ground covered in terms of how game software were marketed and distributed, and as we alluded to in our E3 series of articles, we saw the advance of small, devoted developers in the genre that we all love.

Finally, we saw a plethora of new mods for many of our favorite titles, in fact the number of mods were too many to count or remember (as our readers were quick to point out!). The question we’ll answer today is the most important: Which new games were “the best of the best” in the eyes of our sim community? This year, the staff at SimHQ decided to let you, the SimHQ member, tell us what titles were your favorites, and the mechanism to do that was to take a poll — thus leveraging the power of the modern Internet. Pure genius, eh?

Creating this year’s poll was the subject of much discussion, yelling, personal attacks and recrimination in the halls and offices of the SimHQ staff. Picture the scene: It was sometime near the end of the SimHQ New Year’s Eve office party: WKLINK had just convinced Cat to stop marching around the office while woozily demanding“Drink ‘wodkah’ width me, you capitalist basstarts!” Magnum was forced to use his Taser to take the lampshade off 20mm’s head (note to 20mm: Magnum says that if you yell “WOOT!” in his ear one more time — ever — he’ll use his sidearm instead!). And Beach finally won his first “carrier landing” competition on the conference room table (shhh — don’t tell the boss. He’s a stickler for not scratching up that mahogany table).

It wasn’t until nearly 3 AM when guod, using a value-sized bag of potato chips and a bowl of onion dip, finally coaxed everyone away from the margarita machine and into his office to lay out the framework for this year’s poll. How many categories? How many titles? How many Mods? Which ones? Who took all the limes and salt? So many questions.

Because we didn’t want members to confuse filling out the SimHQ poll with taking the SAT, we decided to “truncate” or limit the list of titles to a select few that we thought were particularly noteworthy in their respective niches within the genre. We knew the list was a compromise, that it wouldn’t / couldn’t satisfy everyone, and was far from scientific (although it seemed quite complicated at the time) but we felt it covered the bases adequately and besides, we were all more than a little sleepy when the margarita machine finally ran dry. So we called the Poll’s list a ‘wrap’ and set off to crawl underneath our desks to sleep it off.

One thing that came up immediately when we initially posted the “test poll” was that you had to vote in every single category in order to complete the poll. Since some folks don’t play racing sims, and some others aren’t all that interested in naval combat, we felt that forcing folks to vote in all categories would incorrectly skew the results. So we added a “no opinion” option, which opened up yet another Pandora’s Box of questions and analysis from those who took the poll. We’ll discuss what we think the “no opinion” results mean later on, but suffice it to say that this option was the lesser of two evils.

Finally, just for fun the staff ran a “staff only” poll early on in this process, just to see how our own opinions would match up to the rank and file members of the site. Now, let’s go to the polls and see how each category did.

And the winners are….