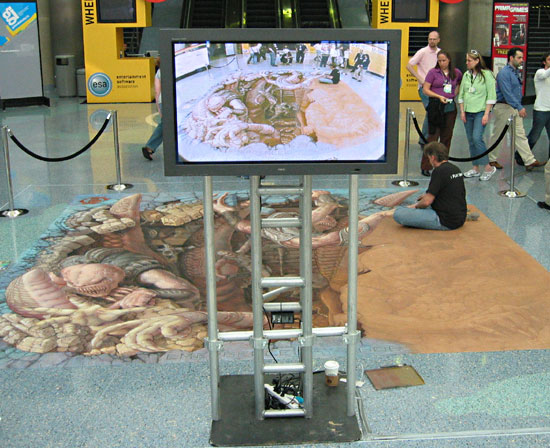 If it’s 10:00 PM local time and I’m writing this in the confines of a hotel room deep inside the jungle that is Los Angeles, California, it can only mean that E3 Expo 2006 is here. It’s been a long day already, and the event has not even begun.

My arrival at LAX was met with a cell phone call from guod and shortly he and Chunx arrived at the terminal. After a spot of lunch at a local pizzeria (BBQ chicken pizza, anyone?), we proceeded to the Los Angeles Convention Center.

We checked in to get our media badges, which was a very pleasant experience for me, considering the near abort I had last year. This time, the only problem was my badge would not register on the scanning machine and the nice lady asked me “what have you done to this badge?” I did my best “Who, me?” routine and before long I was cleared in. E3 relief!

Strolling the premises of E3 before it actually begins is an interesting time, and very different than being thrust into the middle of it as I was last year. You have time to take things in without being deluged by the overwhelming sights and sometimes deafening sounds the event is known for. To put it mildly, E3 in operation is chaos with some organization floating around its core. But today, it was all under construction. Booths were being assembled, exhibits were in process of becoming the stunning video and audio show we associate with the latest and greatest in electronic entertainment.

We had no appointments today, those all start tomorrow morning, but we did happen upon Jason Williams from GoGamer. We talked briefly with Jason about the goings-on and agreed to meet up again late Thursday afternoon.

In West Hall we saw an rFactor poster which just blew us all away. Obviously, rFactor was making an impression in other people besides the Staff of SimHQ. We definitely will be following up on this in the days to follow.

Outside the Convention Center, America’s Army was setting up one of their famous interactive exhibits, featuring in this case a Kiowa helicopter. Of course we all gravitated over to this bird and began taking snapshots. As yet, there was no tent or other enclosure around it and we could just walk up and take a look. It occurred to us that this would be a good time and place to do our first day’s “Welcome to E3, SimHQ!” video, so we took a short little MPEG of Chunx and myself. 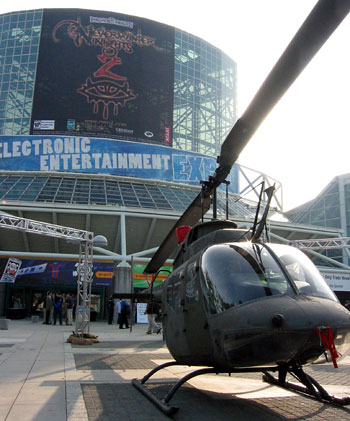 Look what America’s Army brought along to E3Expo 2006.

Trust me, we’re better in person! And we’re not through with the videos. Stay tuned as we bring you E3 with action and lots of noise. Oh, yeah, there’s noise.

Let’s see, what else happened? Well, there’s an abundance of rumors around this place. 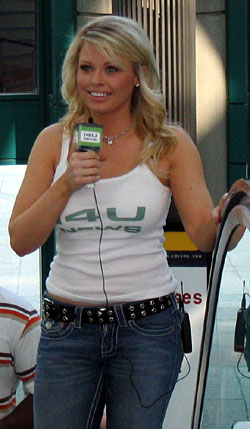 First rumor: No babes. We saw a babe. No, sorry. We saw two babes. No, that’s wrong. Three. Three babes, Chunx? He’s shaking his head “no” and giving me a thumbs up. I think that means more than three. It may be that the rumors of the demise of babes here have been exaggerated. We shall see, document, and photograph accordingly. You can be eternally grateful to us, should you so choose.

Another rumor we’ve heard is about the death of simulations. Could it be? Perhaps last year really was “the last year” sims would even have exhibit space at E3 and their places would be taken over by dust, tumbleweeds, or console games. Funny thing though, I know I saw on our schedule where we are meeting simulation people like Oleg Maddox, Chris Partridge, Anatoly Subbotin, Gjon Camaj, Martin Szymanski, folks from Microsoft, America’s Army, Bohemia Interactive, IENT, Akelia, and TriSyngery.

I even heard rumors that sim peripherals like HOTAS, pedals, steering wheels, and the like were fading from view right along with simulations. We’re scheduled to meet with the fine folks from CH Products, Saitek USA, and maybe a surprise of two.

Somehow our schedule is so jam-packed with simulation related meetings, we may have little time left over for babe-viewing. We’ll see if we can spare a moment now and then for the important things we know our readers look forward to.

The fourth member of the SimHQ team arrived at the hotel just a little bit ago, and Hornit looks like he’s raring to go to E3. It’s great meeting another fellow SimHQ Staff member and I’m looking forward to working with Hornit.

A quick look at the clock on the wall shows that midnight approaches. I have been known to turn into a pumpkin if I stay up too late at night. So rather than taking a chance I’ll end up in a Thanksgiving pie, this concludes my Day One E3 comments.

Stay with us gang, I think we’re going to have some really exciting things to tell you about in the next several days. 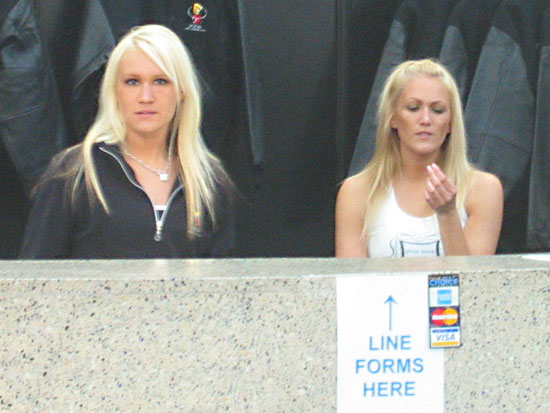