At the 1C exhibit we met up with Anatoly Subbotin and his talented team.

Going straight to the chase, we were clearly happy to learn that the target release date for this new helicopter simulation is currently expected around the end of 2006. We were a little disappointed to find that the only flyable aircraft will be the UH1 Huey, but on the other hand, add-on copters may be possible at a later date. And look at it this way: We’re finally getting a new helicopter simulation, hopefully this year, and it will be a study sim. That’s a pretty bright side, and I’m a glass half-full kinda guy.

WoV:UH1 will include training missions, possibly a mission builder, and has a campaign set in November 1965. In the sim, the player is a part of a team, the Air Cavalry, and does not fly around as a shoot ’em up Lone Ranger Chopper-Fighter Guy. Sounds very promising and realistic.

Here’s the description from the 1C E3Expo Press Kit:

“On March, 8, 1965 the first troops of the US Marine Corps landed on the territory of Southern Vietnam. It was the beginning of a new confrontation between Saigon government and The Liberation Army of Vietnam. During this war the American troops were using not only new weapons, but new battlefield postures as well. One of the most noticeable changes was the extensive use of military helicopters both for transportation and fire support in landing zones.”

Missions will include Combat Air Support, troop insertion, SAR, and medi-vacs. FAC will be implemented. There should be a wide range of other AI-only aircraft, including the A-1 Skyraider and the C-130 Gunship. They are exploring co-op multiplayer involving the three crew positions in the helo. But they know most of us would like to see crewing of the Huey’s. No definite word on this yet though. 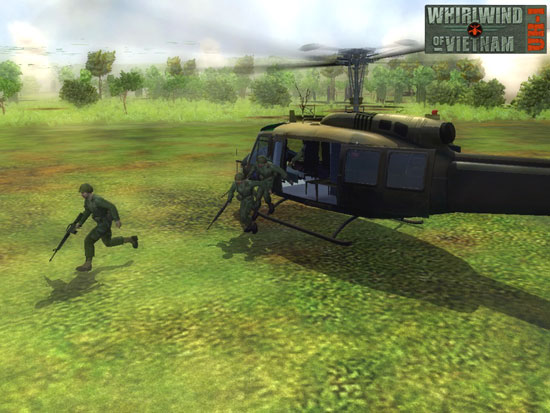 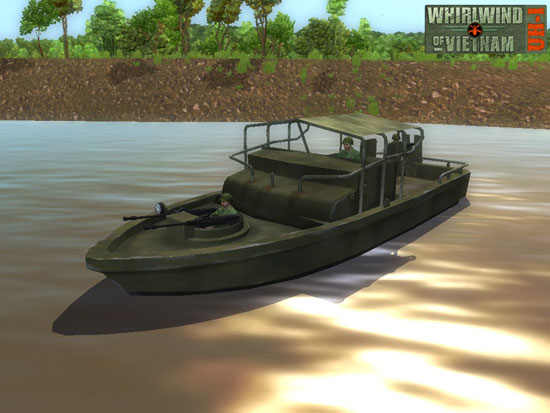 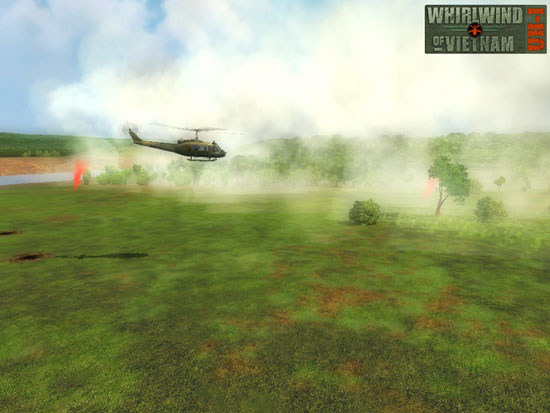 Graphically, this sim looks awesome. The 1C guys took us on a short demo hop that including a flight over a Vietnamese river (which got shot up with machine gun fire with some resultant neat water spray), bridges, vehicles, ground troops, bases, and a little combat action. The UH1 graphics, inside and out, are very well done. The cockpit, especially the gauges and instruments are terrific. The three crew positions are modeled nicely.

In truth, we just didn’t get an opportunity for some stick time, and although I understand the flight modeling is very good, I cannot speak from first hand experience. I will do some follow-up with Anatoly and report back on this aspect, which I understand you all are curious about.

Going back to the graphics goodness, WoV:UH1 utilizes something that you players of “Oblivion” will appreciate. It’s called Speedtree. For those who don’t know, Speedtree is a graphics landscape product that delivers very believable looking forests and individual trees of all sizes and shapes and types. Up close, they are 3D wonders with wind effects., Further away, very realistic landscaping. This is simply the most believable looking vegetation I’ve ever seen. Actually, and here goes a mini-article, we met with Greg Croft of Interactive Data Visualization and he was quite helpful in showing us some of the fascinating aspects of this product. Neat stuff.

So Speedtree is incorporated into WoV:UH1, and when you see it I think you’ll agree.

The target system for 1C’s new sim is not determined just yet, but another recurrent theme came up: 2 GB’s of RAM would probably be a good idea. 1C is looking at possible dual core utilization. The detail on the sim will be very scaleable depending on the power your system brings to the table.

Neither the anti-piracy method or distribution method had yet been determined. We did take the opportunity to let Anatoly know the sentiment of what we believe to be the majority of our readers regarding the use of specific copy protection programs. Obviously this is their decision, but in the interest of fairness to both 1C and to SimHQ members, we needed to be clear what would not be a popular choice with many of you. Harsh reality maybe, but reality. Again, 1C’s decision has not yet been made, and it is their decision to make. We shall see.