We also met with Tri Synergy’s booth in the back of Kentia Hall. Tri Synergy is publishing the Wings of Power add on for Microsoft Flight Simulator. Tri Synergy’s Joe Lieberman introduced us to the software which is scheduled for release mid to late summer.

Anyone who is familiar with Shockwave Productions work knows they are in for a real treat. Shockwave is rapidly making a name for itself in the Flight Simulator add-on world. It’s readily obvious to anyone who’s interested in this era that Shockwave is out to make a name for itself. WWII Fighters ship with 5 aircraft which represent some of the finest fighters to come out of World War Two.

Included in the package:

Joe booted up Flight Simulator on the laptop and we selected the Spit for a bit of a workout. First things first so we went straight to the eye candy. The models were all superb. This is a beautiful aircraft and Shockwave has captured all her luscious curves and proportions in pleasing detail.
As usual, I couldn’t find fault with the model. Next up we jumped into the cockpit and were treated to some fantastic detail and functionality. The cockpit is clickable and the visuals were superb. Typical to Shockwave, the attention to detail will not disappoint. We put her through her paces but unfortunately we couldn’t seem to change the difficulty level inside the game (due to a problem installation of FS2004 itself). No amount of fiddling resulted in any change so we left it as it was. I can say it behaved pretty well overall and it did appear to retain the quality and fidelity of flight modeling shockwave has become known for. Next up we cycled through the other aircraft types. Each has it’s own sound and all of the models were nothing short of excellent. 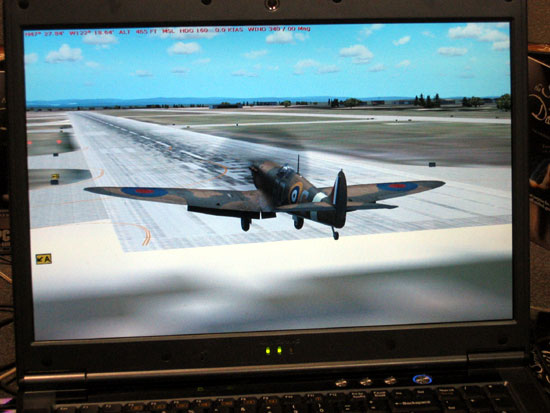 Of particular interest was the BF-109. The sounds were very good. Shockwave has managed to get real sound recordings of these aircraft including the interior sounds. The 109’s leading edge slats even behaved correctly under air loads as we viewed from outside. I was able to stall the 109 and cause an adverse yaw departure which was nicely modeled in the sim. Stall characteristics and low/high speed flight were very nice. As with other Shockwave aircraft, the flight models are on the next level when it comes to Flight Simulator. These aircraft will provide hours of enjoyment and challenge to flight sim users. Shockwave has gone to great trouble to bring you accurate models, cockpits, and authentic sounds. All of the models contain high levels of detail and realism. The P-51 and P-47 are basically similar if not identical to the existing Shockwave offerings. After reviewing both of those prior to this, I couldn’t discern any new or additional enhancements after our short look at each of the aircraft.

The only other new addition to Shockwave’s stable here is the Zero. I hate to sound like a broken record but this one ranks right up with the rest in quality and detail. The only difference we noted with this package versus the single aircraft add-ons was with the included textures. Shockwave provides numerous different color schemes with it’s single aircraft packages. They include popular Aces who flew those type aircraft and several theatre specific paint jobs. With this package you get one texture for each aircraft. That’s right, just one. It’s a bit strange, but I can guarantee you’ll see many fine free repaints available shortly after this product hits the shelves. The real value here comes in the package deal. For around 30 USD you are getting five, count’em, five, superb pieces of history to add to your stable of beautiful thoroughbreds. I don’t see how one could go wrong with this deal.

Nice job on what should be a highly successful product for Shockwave and Tri Synergy. Thanks to the guys at Tri Synergy for the stick time!