The Naval Combat genre, while sparse at E3Expo 2006, does have some interesting news. For today’s report we looked at Pacific Storm by Buka Entertainment. Now you’re probably saying, “That title has been out for a while” and you would be correct about it’s initial release. But Pacific Storm has undergone a significant overhaul that has breathed new life into this title. You can see for yourself here at the official web site where you can download a demo of the new version. 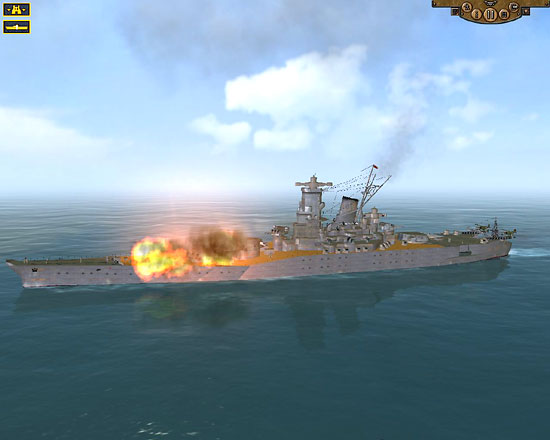 Pacific Storm has been re-energized.

MotoGP 2006 is a gorgeous new motorcycle road racing title for the Xbox 360 from THQ. The tracks and bikes look superbly crafted. But this is a racing title destined for the Xbox 360 and what we’d all like to know is whether MotoGP has the difficulty, realism and challenge required to wear the title of “racing simulation.” Check out the trailer here at PC.IGN.

When a demo station opened up, Chunx stepped up and took the game’s controller into his sturdy hands. Of course, it wasn’t a set of handle bars, but rather an Xbox 360 controller. A younger gamer might be more skilled at using one of these units, but it seemed obvious after a few laps that an Xbox 360 controller’s on/off triggers for brakes, and short-throw joysticks for turning and accelerating simply can’t allow a sim-rider to make the subtle control inputs necessary to smoothly and quickly hustle and flow a racing motorcycle around a track. You can certainly get the bike around the track, but even the much-lauded Xbox 360 controller simply can’t match a quality set of handlebars with brake handles. With a game controller, you’re path around the circuit looks more like a drunk driver’s rather than a true racing line. For MotoGP’s sake that’s probably a good thing, because it might imply that the game’s physics have the ability to push past the level of arcade racing “game” if only provided with a quality controller. 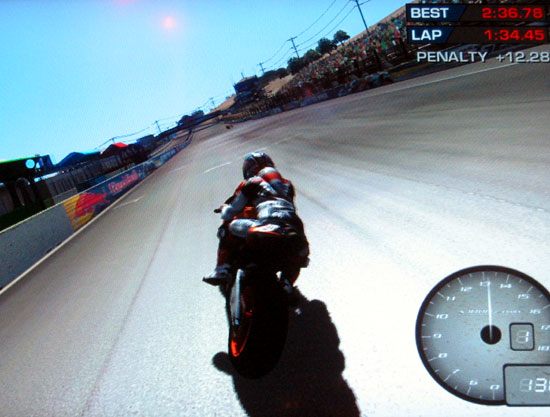 At the game demo stations, difficulty and physics levels were dumbed-down quite a bit. At the game display, there didn’t seem to be a way to enter the game options to adjust the difficulty level or driving aids. As it was, Chunx found it virtually impossible to crash the motorcycles or lose control, even when taking trips into the sand traps.

In order to get a good feel for the game, Chunx selected a track that he already was highly familiar with. Having spent two previous weekends in the SimHQ staff’s online racing sessions at Laguna Seca, he chose that track for his evaluation of MotoGP ’06. Here’s what he found:

It was nearly impossible to crash the motorcycles. Since there didn’t seem to be a way to access the game’s options, there’s no way to comment on whether MotoGP has the ability to turn off the driving aids that were painfully obvious in the demo.

On the plus side, the view system allowed the rider two in-cockpit or first-person views: One with the gauges visible, and one slightly more zoomed in, with only the top of the windshield visible. This view option made driving the bikes much more intuitive, although the Xbox 360 controller still stymied Chunx’ best attempts to drive a smooth racing line.

The game offers several neat features from real racing, such as the ability to alter the rider’s driving position to assist in acceleration (lower body position) and braking (raised body position). There’s also an option for manual gear selection.

Track and motorcycle graphics were superb. Not much more to say there. Really nice.

Damage and collision modeling were extremely forgiving, which really detracted from any sense of immersion in the game. But given the sloppy control offered by a game-pad controller, a forgiving collision model was quite necessary in races, where one’s racing line frequently took you into the path of AI bikes.

So, what’s it all mean? Well, given the heavy dose of driving aids and the use of an Xbox 360 controller, it’s hard to say if there are strong physics lying beneath the arcade surface of this title. The graphics are there, as is the realistic first-person point of view. Hopefully someone will release a handlebar controller for this title, but I wouldn’t hold my breath.

It’s too bad, because deep down it seemed like MotoGP 2006 gave some glimmers and hints that it might have the kind of features that could elevate it to the realm of a true sim.