As I speak with you, it is 9:30 PM on Friday night. Once again I am sitting in front of a vintage laptop computer in my uncomfortable rocking hotel chair in an El Segundo California hotel room. I’m tired, but well fed. Chunx is sitting here typing out his Day 4 E3 Report. guod and Hornit are likewise engaged in producing informative E3 content for our SimHQ readers.

Candidly, we have had a serious Staff discussion about the situation in which we find ourselves in. Namely, we are tired of being tired, of going to bed at 3 AM, only to rise at 7 AM to rock & roll E3-style. One more time.

The discussion was heated and lengthy and at the end of it the consensus was that, in order for us to save what little chance we have of living longer and staying sane here in LA, we are going to make some tough decisions.

We must reduce the length of our articles.

We know, it seems a draconian measure, but given our goal of life versus death, absolutely necessary. I am on board 100% with this directive, as you shall soon see.

Day 4 here at E3 was an absolutely smashing conclusion to our trip and filled with terrific discovery, surprises, scintillating simulation discussion and newsworthy news.

I went over slightly on my word count because of the opening paragraphs, but it’s still only 9:47 PM and I’m done. It’s peaceful slumber time and so this is your faithful reporter, 20mm, signing off.

I got a chance to swing by the Microsoft pavilion again this Friday afternoon to take a hands on look at FSX. By now we all know about the “mission” aspect of the sim, and Microsoft is using this to effectively show how it can really be fun. This is really going to help them pull in first time simmers in my opinion. I got to fly several of the missions which are interesting and well done. The sim looked great on the platforms at the booths. The boxes running the sim were 3.4 or 3.6 GHz Pentiums, with 2 gigs of ram and NVIDIA 7800’s. Remember this is currently a DX9 title and will ship that way on release. Already, with just DX9, the sim looked fantastic, specifically the water. Remember this is pre Alpha code and any criticisms I will hold until later. It’s not something you judge at this stage. Overall the sim was running very well on these rigs. 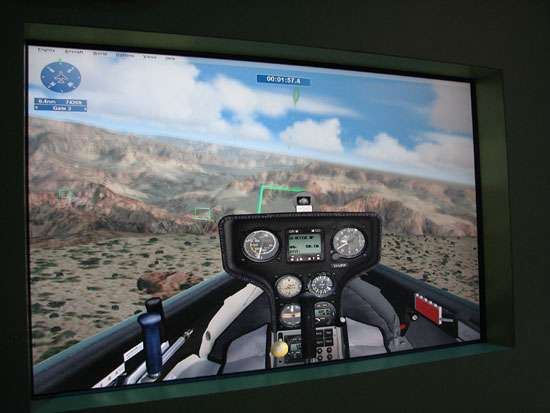 Microsoft is taking a bit of a different approach with this version and will be slowly releasing bits and pieces of the features and enhancements to the public in the coming months. I already noticed the improved clouds and haze effects. I was told that the overcast cloud problem in the current version will be addressed. It may not get resolved totally, but improvements should be significant. Same story for the current visibility transition issues. We should get a more gradual change between varying values of prevailing visibility.

The rigs running the demos contained just the demo missions with only those particular areas and textures being rendered. Mesh, road, and texture improvements were noted. I was told that we should see significant enhancements to the generic non high detail airports which for me is a very big deal. Due to this limitation of the demo, it was pretty much impossible to check out anything outside the mission areas.

I have to say one thing about the “missions”. I was sucked in by the Red Bull Extra racing mission. You simulate being a Red Bull race team member in Salzburg running a timed pylon course. Once I started flying it, I couldn’t stop doing it over and over. It was really addicting. I got some great pointers from Scott Andersen(Aces team member) and after a few tries, I posted a 2:12 time for the course. They let me know that as of Friday afternoon, yours truly, pilot racer extraordinaire, held the E3 attendee record for the mission. I’m still waiting for my trophy.

I’m looking forward to more releases from the Aces team as we get closer to release this holiday season.

We had one of our more colorful interviews on Thursday with the infamous “Wild Bill” Stealey. Bill is the head honcho for I Entertainment Network better known for it’s War birds online multiplayer sim. Bill’s latest efforts center around the latest versions of that game and a new sim based on that engine. This new sim revolves around your training in the T-6,T-37 and the T-38 on the road to becoming a United States Air Force pilot. Missions will follow a logical progression through a planned training syllabus just like the real thing. You’ll be graded on your progress as you go. If your familiar at all with the war birds engine you’ll recognize this right away.

Bill showed us a pre beta version which included a nice modeling of the airfield and the surrounding area at Randolph Air Force base in Texas. The models and the sim are a bit rough around the edges, but Bill assured us it’s still early in development. The team is heading out to Vance AFB to get hands on experience with the aircraft in an effort to get maximum accuracy for the models, cockpits and flight dynamics. This title looks to have some promise in that it’s just different enough to be interesting. The software is being pitched to the Air Force as a way to give new students the ability to casually practice basic tasks in an accessible and fun manner.It’s been shown that students who access high fidelity simulations on a regular basis, versus those who don’t, do better overall in flight training.

We wish Bill good luck with this and look forward to further development with this.