The final motorsports interview of the day was with SimBin and 10Tacle studios, learning about their upcoming title GTR2.

At face value, there doesn’t seem to be much new content in GTR2 for owners of GTR. The game covers the same FIA racing series. But what we found out was that there is A LOT of new content in GTR2 that easily justifies its purchase, particularly for new and intermediate level sim racers. Not only is the game more graphically refined, it features better physics, better tire modeling, improved weather effects, a more robust damage model, and best of all a superb, well thought out training module that put a big smile on Chunx’ face. GTR2 looks like its going to be a superb product. Let’s take a walk through the new content in GTR2, as briefed to SimHQ by SimBin’s Diego Sartori and 10Tacle’s Marcel Jung:

Graphics: The cars and tracks look even more stunning than in GTR or GTL. One issue I had was that the pavement seemed a bit on the dark side, making braking and cornering judgement a little harder than in other sims. But the pavement texturing looks much more to scale than in other titles. The cars are typical SimBin quality, and look fantastic. Where things get really better is inside the car. Matching the best of the flight sim world, the car cockpits are fully 3D modeled, so that the visual scene changes as the driver’s head position changes. This not only happens with in-game head movement, but for those with NaturalPoint TrackIR systems, you’ll get the full 3D treatment as the relative position of the wheel and instrument cluster shifts as you move your head — a really, really nice touch.

Cars: The 2003 and 2004 FIA GT seasons are replicated in this title. That means that in addition to all the cars that shipped with GTR, there are several new cars to try out, including the Nissan 350Z and Maserati MC12. All are very well modeled.

AI: This time around, the AI cars now utilize algorithms for tire and brake temperature that impact their handling and performance more closely in tune with human driver physics. That’ll improve the quality of single player races, with the AI cars suffering from the same issues as the player car for the first few laps until the tires and brakes are up to operating temps.

Tire Model: For GTR2, SimBin was able to greatly refine the tire model to more accurately replicate the slip angle and contact values of actual tires. I asked how and where they obtained this new data, but SimBin was unable to comment. But with a professional GT racer on the team, I think we could all have fun speculating on where that new data came from. The bottom line is that the cars behave much more predictably and have a much more planted feel than in GTR, and should address the stability and break-away issues that Jens Lindblad discussed in our review of GTR. The new tire model does make the cars easier to drive, with more progressive tire slip, but that doesn’t equate to making this title an “arcade racer.” You can still over-drive the car and spin out. And it still takes a great deal of skill to drive a car fast.

Damage: We saw the damage model in action, and the visual effects are really nice. Parts fly, the cars get bent up, and it’s more believable than in any previous SimBin/ISI engined title. That said, I was more concerned with the driving effects of damage. Here, Diego told me that there is damage model coding that alters the cars’ aero, suspension and drivetrain performance, although the effects are sometimes a bit subtle — his response was along the lines of “yeah… you’ll notice it.” I am hoping that the damage model effects are scalable, but the goal should be to make the car harder to handle, forcing repairs in the pits (if that’s possible) or at least an uncompetitive car.

Weather: Man, does this look great. Weather can roll over a track, bringing rain and changing the driving conditions as a race progresses. While you won’t see situations where one part of a track is dry with another in rain (except where the weather is rolling in) the overall effects we saw at the show looked superb, and really made the visual scene when driving very obscured – a realistic issue for real drivers in inclement weather. 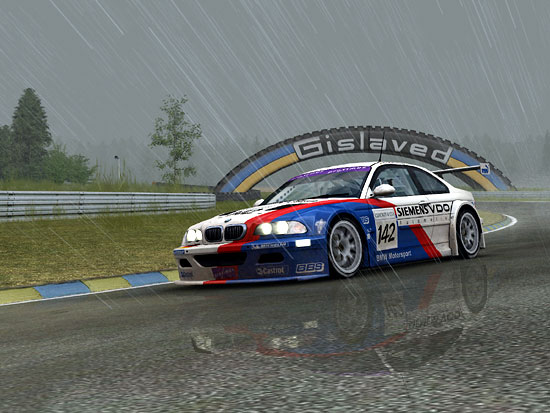 The Big Thing: All of the above features are really cool. But the one thing that really blew myself and 20mm away was the comprehensive and highly useful driving school modes included in the game. I was truly impressed with what the dev team has done to make the hard-core simulation modes of this game accessible and enticing to beginner and intermediate racers.

Let’s look at the rundown:

Designed by professional driving instructors, the driving school has modules or lessons that take a driver through all the skill sets required to become a smooth and fast driver. Hand’s on lesson modules on chicanes, turns, braking, and acceleration are all included. In each lesson, you “chase” a semi-transparent ghost car that shows you the ideal line and speed. Also included is an ideal racing line overlaid onto the track surface. The line changes color to indicate what you should be doing with the brake and throttle. Now, the basic concept for the ghost car and racing line are not new: ISI used the ghost car concept in earlier editions of EA’s F1 series, and Papyrus used the racing line overlay in it’s NASCAR Racing series. But together with some audio tutorials and timing goals to achieve, the application of these features in GTR2 is more complete and refined. Its an outstanding tool. Oh, and the driver of the ghost car you’re chasing is none other than sim racing legend Doug Arnoud.

As you pass each successive training module, game content will be unlocked for you. That might cause you to pause and think, “WHAT!! More locked content from SimBin!? Didn’t they learn their lesson in GTL?” Well, they did, actually. Veteran sim racers will be able to unlock all the cars and tracks via the Custom Championship module, allowing them to bypass the training. But I’ll tell you, this 6 year veteran race sim junkie thoroughly enjoyed the driving lessons, which even include some light-hearted humor, and have something to offer racers of all experience levels. I think everyone will want to play with them. This is a much better way to train new sim racers and I applaud SimBin for the effort and detail they put into this module.