On top of all this training goodness, there’s yet another feature that really impressed me. For those who read my Race Sim Basics article, you’ll remember how I emphasize the utility of reviewing replays, both of your own and others, to improve your technique and lap times. Well, SimBin has taken that concept to the next level in their Time Trials module. Here, you can turn practice laps on the track of your choice. Each time you set a new fastest lap for the session, the game creates a “ghost car” of your fast lap for you to chase and pass. If desired, you can have the race line you used on that fast lap overlayed on the track. This can make it much easier to see, in real time, where you’re consistent, where you’re not, and how to get faster. And to go one step further, GTR2 will allow you to e-mail your best time trial laps to your friends to learn from or to beat. Or, you can upload them to enthusiast web sites for comparison and ranking. I quickly found that the Time Trial mode became my practice mode of choice when driving GTR2. Great stuff. 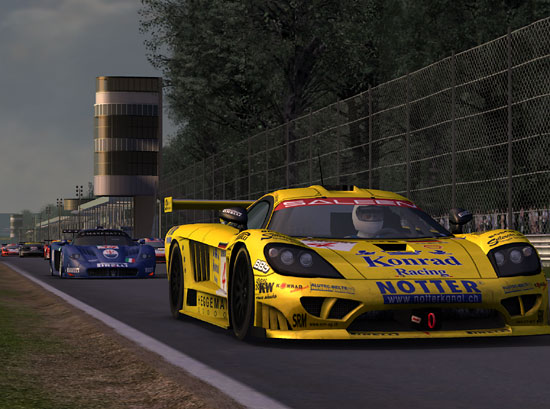 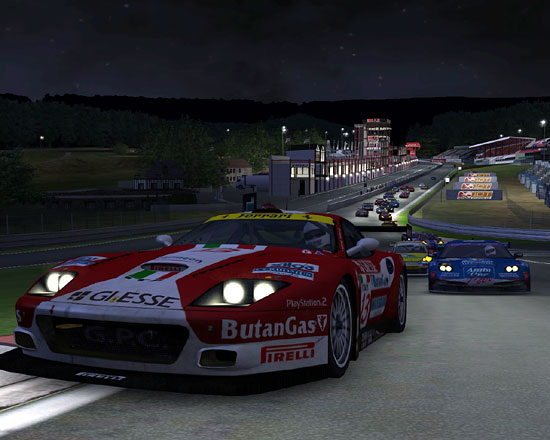 Sounds good, right? But wait, there’s more! GTR2 will also ship with a comprehensive racing theory text, embedded in the game GUIs. We didn’t see this module, but Diego seemed very excited about it, and I believe the goal is to educate sim racers with a series of texts on how to drive faster, and more consistently, as well as how the cars’ components work. Sounds like our “Fast Lap” series won’t be needed for GTR2.

In addition to the Press briefing, I got several opportunities to log some “seat time” with GTR2 over at the VRX racing cockpit display (thanks to Colin, Peter and Ken for that!). The GT cars still had all the brute power of the original GTR, but felt much more planted and predictable in weight transfer and grip status. I had no way to alter the chassis setups, but overall I like what I felt. And as usual, the audio for GTR2 is typical SimBin — awesome. Also, the sun glare we loved in NR2003 and in some flight sims has made it into GTR2, and is really a sight to behold. Great work. I can’t wait to get this title later in the Summer, and give it a more thorough evaluation.

This is one sim I was very much interested to learn more about. Actually, prior to our meeting with the folks from Simbin, I had already driven GTR2 several times and had seen some interesting features, such as the racer training. It was impressive, and what I learned today just reinforced that. This is one racing simulation that is actually going to help the aspiring racer learn how to go fast. I thought Diego Sartori from SimBin said it very well, and I’m paraphrasing here, but he said that racing simulations should not be hard. They should reflect most everyone’s personal experience of driving a car, because that’s what it is. Not hard.

What is hard, however, is to drive fast, as fast as a good race car driver. Very perceptive I thought.

Chunx is writing up his GTR2 impressions and I don’t want to be repetitive. I am trying to be a wise wordsmith. But the things that impressed me were the 3D cockpits (stunning), sun effects and lighting, the dynamic weather, the terrific graphics on the cars and tracks, the fact that you can record a lap and send it to a friend to analyze or race against and see if he can beat your time (he sees your car as the “ghost” car), and the driving lessons as I said above.

Folks, if you think you might like to try a racing sim, keep your eye out in summer 2006 for GTR2. 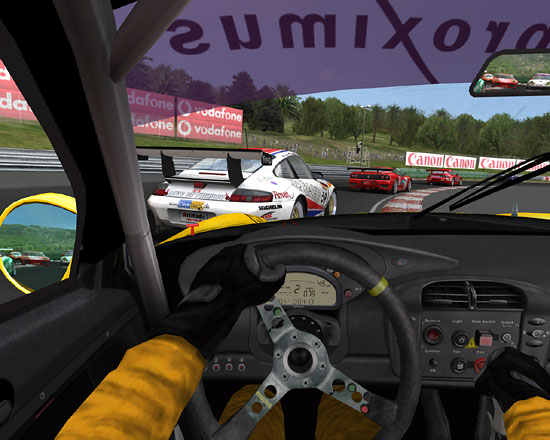 This console sim title wasn’t far enough along in development to be displayed at E3, but we did get to talk to some of the devs about it. We were assured that GTR for consoles does not represent a shift in platform focus for SimBin, and PC titles are still their bread and butter. GTR2’s design will form the foundation of the console title’s concept, but all code for the Xbox 360 version must be written from scratch: this means a new rendering engine, a new game engine and a new physics engine. However, we should see most, if not all, features and gameplay concepts carried over from GTR2 to the Xbox 360 version, along with some features completely new to the GTR series. One of the features carried over should include the simulation mode (this should be good news for hard-core race sim fans). Likewise, SimBin developers also say that new features and ideas created for the Xbox 360 version will be included in future PC titles, and so on. Expect the console version to make it to retail sometime in 2007. In discussions with several developers, I’ve been told that there’s nothing technical preventing them from putting a hard-core racing sim on a new-gen console. The only limitations are consumer desire, corporate decisions, and racing wheel controller availability. As consumers we can show demand for race sims on consoles by voting with our wallets. As a small market niche we don’t have a lot of control over the corporate suits’ perceptions right now. But don’t be surprised if you see several new force feedback wheels to show up for use with the Xbox 360, supporting titles like GTR and Test Drive Unlimited. And that might be the catalyst we need to expand our genre’s share of the electronic entertainment market.