During the same week in May 1998, I became a first-time father and also began writing for SimHQ.com. I’m not sure which one made me more nervous at the time. Looking at my kids today, I know which one should have.

In the past decade, SimHQ.com has become an undisputed leader in the online simulation community. Through the years, we’ve delivered some great news scoops, recruited and kept a talented pool of writers, published some of the best articles available and have become a home away from home for thousands of simmers. We’ve kept our focus, understand our mission, and — with our readers — contribute to a great community each and every day.

During that week in 1998, though, I don’t think anyone involved in the site could see that coming. At least, I didn’t. All I knew as a fledging, unpublished writer was that I hoped and prayed that my review of M1 Tank Platoon 2 would match the great reviews and articles already posted on the site by guys like “Troll”, “Outlaw”, the “Bad Lieutenant”, “Skater” and “Rattler”.

When the site’s owner and founder, Frank “Crimson” Morissette, told me not only did he like my article, but that it was generating great traffic for the site, it was like a weight had been lifted. When he asked me to formally join the team a month later, it was an honor, and it remained so, no matter which owner I would later “work for” as the Senior Editor.

Frank, Robert, Pete, Dan, Bubba, and Doug all had different ways of doing things, but at the end of the day (which used to habitually go until the very last ICQ message at around 1 AM), it was always an honor.

It remains so to this day, although I haven’t done much work for the site in several years because of work, grad school and family. Oh, and I can’t forget fatigue. 😉

I originally wanted to write for SimHQ because as a consumer, I couldn’t find another site that published reviews of products with the depth and understanding of content that I expected. It was never about notions of free products or pay for the work we do, although there was that really exciting period in the dot-com boom when we were being courted by a venture capitalist, who turned out to be as fake as the big dollar signs brought up in conversations. More about that later. Or not. ;). Anyway, SimHQ was always about taking our love of our hobby and sharing it. 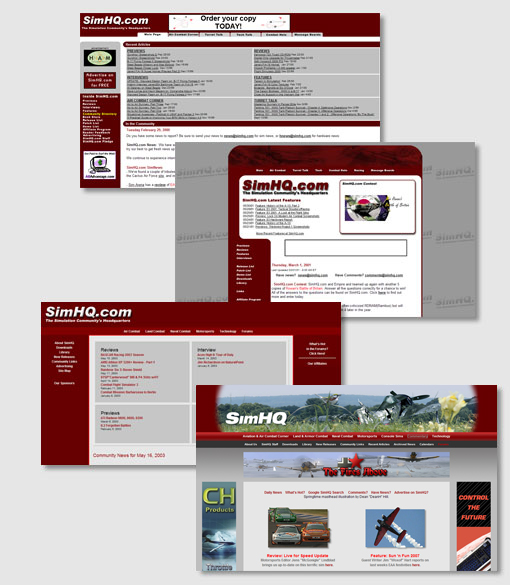 We don’t want you to get the feeling that running a site like this has always been animated bluebirds, though. There have been some bad times. Sometimes, really bad times. Not much need to get into those, if you ask me. If you’ve been with us for a while as a reader, you probably know what they were. If you were on staff through some of them, you’ll most likely remember the experience something along the lines of “Why did I put up with that for a Web site?”In the years between then and now, there were some great times… too many to name, really. You’ll hear about some of those stories from our writers in the weeks and months to come. All I can tell you now is that I’ve done some great things, met some fantastic people and seen the hobby move in so many interesting directions because of this site. It’s been a ride, that’s for sure. I’ve got my top ten list of good stories, and suspect a few others do too. We look forward to sharing them with you.

We put up with it because of this… through good and bad, thick and thin, the strange staff affinity for sheep, or shared beers during our real-world encounters with each other (Andy, I still owe you a Guinness, and Pete, we still need to visit that tank museum), one thing’s been a constant. We all are or were part of SimHQ because of a passion for the topic, a love for writing and the desire to make this the best sim site in the world.

You’re going to hear a lot of stories about the history of the site. Much like the tales coming from that crazy uncle during the holidays, some of them will be funny and some will firmly be in the socially awkward category of “maybe you had to be there.” But we’ll tell them because the story of SimHQ is the story of the world of sims, and we’re damned proud to have led it.

Each month, we’ll post a few gems from the cobweb-filled recesses of our minds (and e-mail archives), and along the way we’ll share some things like the Monday morning SimHQ “Deja News”, some of the best forum posts and other things we think you’ll find interesting. We hope you enjoy reading it as much as we will in putting it together.

Thanks for reading this far into our introduction of “Ten Years of SimHQ” without breaking into sentimental tears and thanks, as usual, for making SimHQ.com what it is today, and what it’s always been.

Wishing you clear skies, full tanks, and oblivious bandits at your 12 o’clock low for many more years to come.

From SimHQ Towers: Confessions of a Sim Site Owner