Let’s talk racing. At E for All there was racing, but it was connected to hardware in some way, shape, or fashion. What does that mean? Well, and remember I always speak from a simulation point of view unless otherwise indicated, there were no racing sim developers at E For All. But there was rFactor. How and why? Because it was being played to illustrate various hardware type devices. Such as Intel’s quad core machine and Intel’s relationship to the Sauber BMW F1 race team. They had rFactor up and running, had an F1 timed contest, very cool. But it was not really to push rFactor, and there was no one there to talk about rFactor. The sim, including the G25 used to drive it, were there to illustrate the Intel hardware.

Now, they had three mock-up F1 cars in the center arena and it was there that serious contenders could run lap for time and be entered in the contest to win one of those quad core processors. It looked like a pretty tight squeeze getting into the cars, they had to take out the wheel setup to even begin. Out front they had six practice stations, with a monitor, and a Logitech G25 wheel and pedals. No shifter on these setups though, and the shifting was all auto. I took a few laps on the practice grid, but my times were horrible. Unfamiliarity with the track (Silverstone I believe) didn’t help, and the auto shifting didn’t agree with me either. So I never did go for gold in the mock-up car, although I recall the best time at the time I noticed was a 1:32. 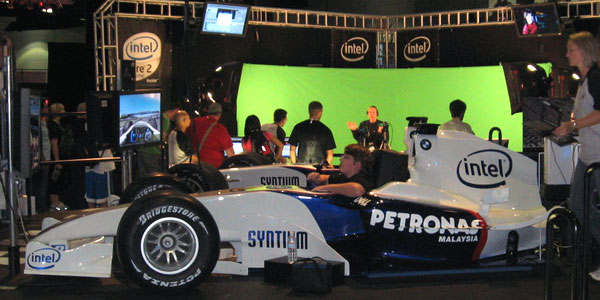 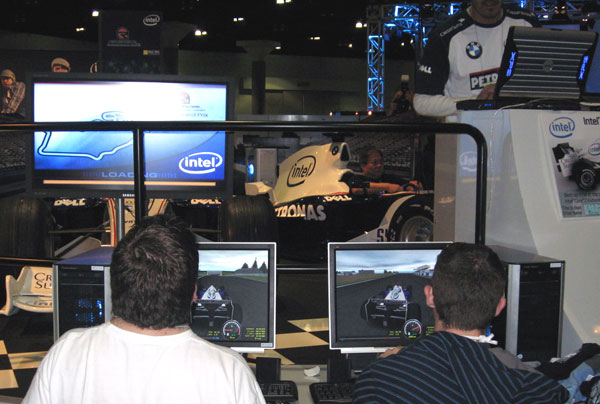 Same thing with my next event feature, the DBox Motion Racing Chair. Again, running rFactor, but as a means to illustrate the capabilities of the product, a racing chair, developed by people who have done motion simulators for motion pictures. Got the pistons on the feet, the jolting you get in the seat from running over the rumble strips, pounding sound, rock and rolling, etc. Nice system, and it includes a Logitech G25! Yes, that’s right. If you look at the following pictures of the system, you racing fans will immediately go “Hey! A G25!” But there was no one there from Logitech to talk about it. 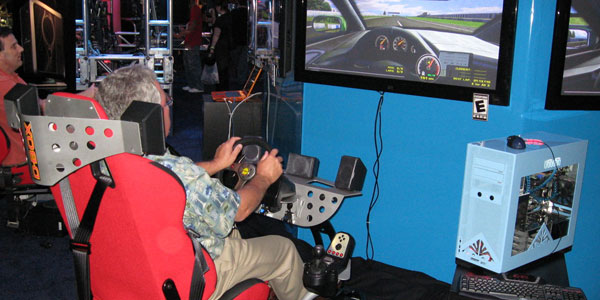 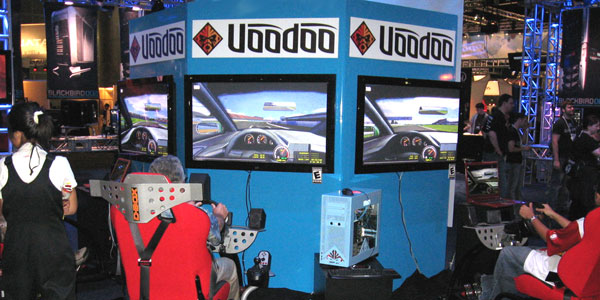 Now then, did I race it? Sure I did. I spent a lot of “seat time”. Was it cool? Yeah, pretty cool, but pretty hard on the butt after a while. And yes, that may be realistic, but I still like the cozy comfort of my home version of an office chair. And I didn’t spend $15,000 for it. Hey, I aint’ saying it ain’t worth it, if you want one, I think that’s great. I just don’t have the disposable income to make it happen, and remain married to my current spouse.

I asked if the G25 was holding up well, and they said it was, but a couple things. First, rFactor was set to shift on auto, so the shifter being there didn’t mean squat. Second, the extreme vibration of the seat would loosen the tightening screws on the shifter quite often. Third, if you ran into a wall head first (not that I ever did), you were over. No way to shift into reverse. Talk about a racing immersion killer. But again, the key thing I took away is that the exhibit was for the racing seat, not really the G25 or rFactor. Now, people probably would ask “Hey, what’s the cool wheel?”, or “What race game is that?”, and I’m sure they’d get the right answer, but no one from either concern was on hand to answer any detailed questions.