You mean the mean streets of LA, right? I told you, the SimHQ Texas wheels of death took care of that.

Well, let’s see. Company of Heroes, Opposing Fronts was set up at the THQ booth and although I played around with it for a while, I couldn’t find anyone available to actually talk about it. I’m not an experienced RTS player by any stretch, so mainly I bumped around and watched the action. It did look good, has DX10 capability, and dynamic weather effects. At one point, I know it was raining, but I don’t think that qualifies as an actual dynamic weather predictor. 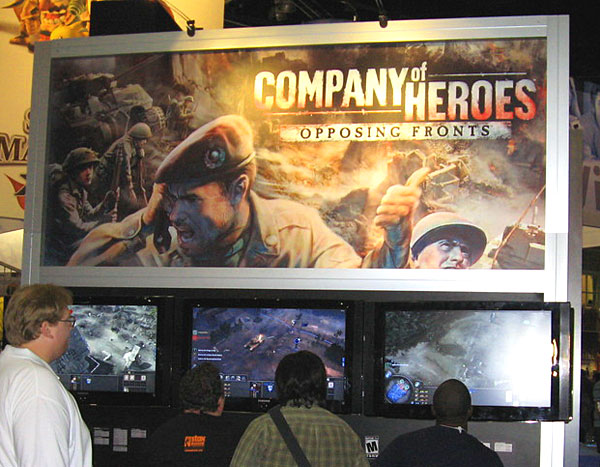 What else? Well, there was Call for Duty… errr, Company of Judy… errr, Call for Jury Duty, Judy… ah forgetta about it.

The rest that was there was setup to showcase hardware. Intel had Ghost Recon 2 set up a on couple of machines, H2H, and I got killed by anyone passing by. Again, a great machine will make the games run nice and have extremely fluid frame rates, set the graphics up to max, or near max.

OH! And I almost forgot, the star of the show. Who wants real smash mouth action? Great graphics, Wii, and Mario too? You know you want it, SuperSmashBros. Brawl!

I can almost hear Magnum bawling over what I just wrote… but yes, it was all going on, at a center stage, with a grandstand seating for the assembled crowd, and the chance to participate. Sigh. On the plus side, the promoters in blue looked pretty hot! 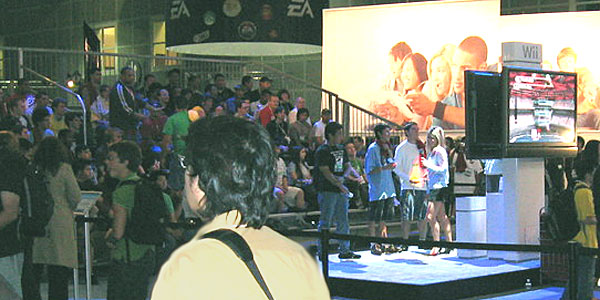 Sorry NightCrawler and you other Navy sim guys. Nothing to report as Akella and PT Boats were absent without leave.

There was actually a lot of this at E For All. As I mentioned, Intel had a big area, mostly to promote their new quad core 2.66 GHz processor with 64 bit Architecture, 8MB L2 cache, 1066 MHz front side bus, it ends up in a screaming machine. Everything I saw running on it, was spectacular. But again, it should be. Smooooookin….

And then, they made me dance. Captured on video and made into an Intel ad, plus put on a 1GB flash drive which I would get to keep FOR FREE! It was almost too much to resist. Me in front of the hot lights, bumping and grinding in my SimHQ crimson polo shirt, getting it on, taking one in the head for the home team. And a free flash drive. The funny part is, on the way to the event the first day, I was talking to guod and he said, “Got your thumb drive?”. Uh, no. See, I had one, but I forgot it back at the hotel. “Geez!” he said, “OK, go find a place there buy one, you need it”.

Just like that, there at the Intel exhibit, was my opportunity. So I watched a few people go through the grinder first. It was grueling, a grueling grinder. The announcer guy would try every which way to get some poor slob or slobette up there and then once the music started critique their dance moves. It was awful and awfully embarrassing. He kept promo’ing it as an advertisement, and I thought “well, if I can do a straight forward ad for SimHQ, I’ll do it”, but no. Had to be a dance. And like the dancing chicken I am, I chickened out. My opportunity for fame, and a free flash drive, gone. Here’s the scene, see the green set in the background and the lights? That’s the dance set with some poor schmoo making an idiot out of himself. In the foreground is the F1 mockup cars for the rFactor challenge race. 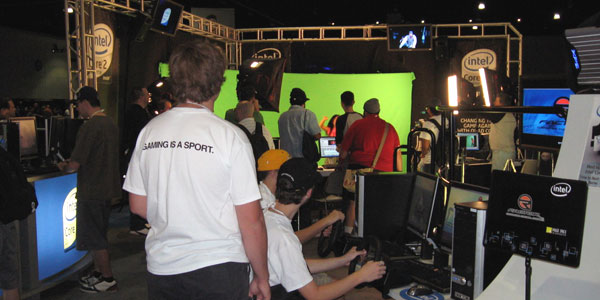