“McGonigle” steps up to microphone.

Posts flourish in the consolidated SimHQ Motorsports Forums discussing race tactics, set ups, racing and even some comments on real racing proving that SimHQ is the place to be to get into friendly yet fast, intense online racing and for good advice on how to get the best out of your sim.

A million thanks to the racers and posters and staffers like Dan “Chipwich” Blake, and to “guod” for being site owner, custodian, host, race control zebra and everything else all in one. That is a heck of an achievement.

As for the racing sims themselves… I can’t help feeling that it was a somewhat bleak year for the PC based variety with only one major new simulation title being released. And even that wasn’t quite new because it was RACE 07™ The Official WTCC Game; the sequel to last year’s Race, based on the ISI gMotor also used in rFactor.

Well, actually another new title was released in a sort of very low key and I’m talking about the Turismo Carretera by 2Pez, introducing the Brazilian equivalent to stock cars. It too, is based on the ISI engine and is a very fine effort by a very small team, illustrating that the availability of an adaptable simulation engine as used in rFactor has facilitated many freeware and commercial releases that would otherwise not have seen the light of day.

The year saw the release or update of some great mods: F1 1979, iDT’sChampCars, The fantastic Power & Glory for GTR2. We must not forget the absolutely amazing Le Mans 1979 track by Virtua LM! 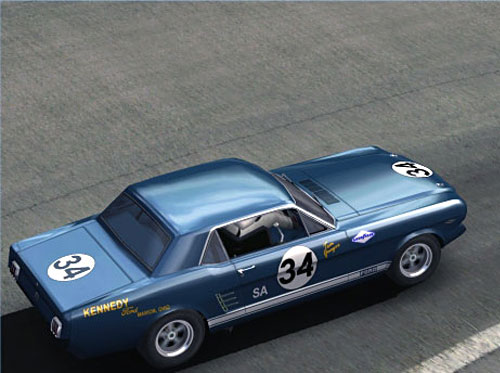 Towards the end of 2007 it seems to me however that the flow has stopped as I haven’t seen any major mods being released, or maybe I haven’t been looking hard enough.

Driver’s Republic, envisioned and coded by Eero P. of Richard Burns Rally fame (Eero coded the physics of RBR) looked like taking an important step forward in terms of letting the driver assemble his own car from standardized components and using torrents for distributing new content. I tried the beta and would have loved to see this project evolve and mature but Eero was hired by Blimey and we can only hope that they will let him continue evolving his ideas as I think Eero is capable of filling the shoes of giants such as Geoff Crammond and Dave Kaemmer. For now, Driver’s Republic seems unlikely.

And speaking of Dave Kaemmer… in many ways he is the godfather of racing sims to many sim racers and quite a few of us got hooked on our hobby from trying one of his simulations. They range from Indy 500 The Simulation, through Indy Car Racing, Grand Prix Legends and the NASCAR Racing series sims of which the 2003 Papyrus release NASCAR Racing 2003 Season still stands as the latest of many pinnacles.

So where is he? Dave’s new company, co-founded with baseball’s John Henry is iRacing. iRacing sends out press-releases at irregular intervals while working away secretly at redefining the sim racing genre, at least as it’s descibed according to the company’s web site.

With such a fine pedigree, we sure hope that iRacing will be able to live up to expectations and expect it will, with laser-scanned accurate-to-the-bumps-in-the-road tracks and a driving model that is aimed to ensure it’s usage as a training tool with the real world racing drivers.

Let us hope for a release soon, as I can’t wait to see what they’ve come up with!

The consoles such as Xbox 360 and PS3 threw in their bids at the ultimate racing title with Forza 2 and F1 2007.

Others will have to offer their comments on this as I’m still not tempted by the library of sims for consoles. Too much street racing for my taste. Remember, don’t use your local streets as a drag strip or a race track.

Speaking of F1 2007 for PS3, this game was used by the German TV station RTL for Niki Lauda, triple-time World Driving Champion to present each track used in the 2007 season. 6 or 7 pit crew personnel rushed into his living room, set up the box and he drove a lap on the relevant track while commenting. When he was done the crew came back and removed the console with typical F1 pit work speed and efficiency, leaving Lauda with a slightly perplexed expression on his face. Very funny when you see it.

Naturally the real F1 season was a soap opera the likes of which we have rarely witnessed.

Norbert Haug of Mercedes: ”If we’d copied the Ferrari we wouldn’t be as fast as we are!” (true quote!

Lewis Hamilton: ”I’ve only been in F1 one year and am only 22 years of age, buy my autobiography it is out now!”

Stewards of the FIA: ”The temperature of the fuel in the BMW and Williams was not in compliance with the regs so really they should be disqualified from the final race of the season; meaning Hamilton is really the champ, not Räikkonen.”

Thinking hard about it, nothing really made me go “wow!” in motorsport sims during 2007.

I was looking very much forward to Driver’s Republic being refined and expanded to deliver what the vision promised: a sim where you could manufacture your own car from an enormous amount of pre-fabricated parts, making me a mini Colin Chapman or Adrian Newey.

Perhaps even mounting a virtual attempt on the Land Speed Record or the Water Speed Record. Wouldn’t that be fun now, going online with your own creation and testing it against other designs!

Motorsports Mod of the Year: Legends of 1966 for Grand Prix Legends

Motorsports Mod of the Year Runner-Up: Power & Glory for GTR2

New Racing Sim of the Year: None

Grand Prix Legends is almost ten years old but still going very strong thanks to the shared talents of the modding group which also brought us Legends of ´65 and Legends of ´69. The track limit of 64 track slots has been cracked. Aero lift and slipstreaming has been implemented and perfected. The player can now choose many more car variations than the original sim’s 7 cars. The mulitplayer tool iGor has been updated to accommodate the different mods so the sheer scope and dedication of this modification cannot be underestimated.

The Power & Glory mod group obtained permission from Simbin, the creators of GT Legends to use material from that sim and not only transferred GTL to GTR2 but effectively created an entirely new sim by providing period-accurate tire models thus restoring the power and the glory to these classic GT cars. This enabled sim racers to race against the great of racing such as Gurney, Fittipaldi, Unser, etc.

RACE 07™ The Official WTCC Game was the only major sim released IIRC, but being the only Vodka in the bar doesn’t necessarily make it the best Vodka (not that it’s bad as such). 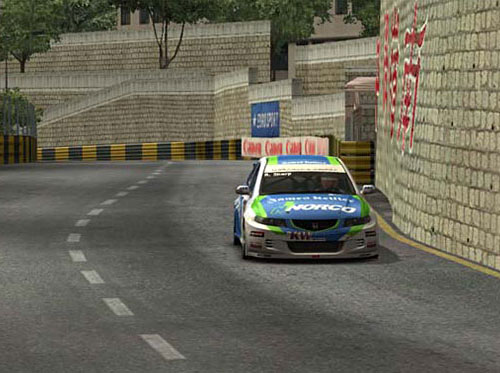 Racing sims and mods continue to deliver more of the same with very little in the way of expanding the genre. Every new sim — and I’m talking primarily about Simbin here because they are the only developer currently pushing out new sims like they were carpet bombing the market — offer the tried and tested game modes of testing, single race, championship and multiplayer.

I’m not looking for contrived story lines, careers or cinematic experiences. I’m just wondering if it would be fun to have a racing sim that worked along the lines of Second Life, or Eve online, where you can choose to take part in a team in the form of a team manager, a chief mechanic, a driver, a designer, a factory manager, a logistics officer, or whatever. In short: be there.

Let’s say I had to make sure that the team brought along enough spare parts to a race event. I had to prepare the cars and make arrangements for the transport and actually drive them into the transporter and sending off the trucks to the right track! Perhaps I’d be the driver as well as the mechanic, or I’d get others to drive for me and concentrate on being team principle. A total experience of having one or several roles to play in a sim world that would allow me to stay in that world without having to go to different menus in order to attend practices, driver briefings, races, PR-appearances, etc.

But it shouldn’t be all nerdy and inaccessible. I’m interested in solutions that will actually offer some tuition and insight, teach me new tricks. Where is that in-built crew chief that CART Precision Racing had back in 1998? Huh!?

Almost ten years has gone by and this great idea hasn’t been copied by anyone or seen in any other racing sims or games but for the dubious implementation in Total Immersion Racing.

Can we bestow an award to ourselves?

SimHQ’s online racing community swelled this year, now sporting races with over 20 entrants on the weekends. Fun stuff, and a nice way to share the hobby with others via TeamSpeak. Of course on some days it was a great way to learn to hate your hobby, depending on how the racing or Internet connection treated you, but overall it’s a highlight of 2007. If you haven’t joined the fun, check out the very active SimHQ Motorsports Forum and see for yourself!

The Rules of Auto Racing, Wrecking, and Talking -or- Back Off, That’s My Line!

GTR2 vs rFactor vs LFS – Shootout #2: The Caterhams

GTR2 vs rFactor – Shootout #1: The Porsches

The Power and Glory Mod for GTR2

How many new PC race sims this year? Just Race ’07, right? And really it uses the same game engine as rFactor and GTR2. I think that until there’s an advance in racing game engine technology that clearly surpasses the above game engines. Perhaps fully utilizing multi-core systems, and when Vista/DX10 issues resolve out[presuming it will – editor] we probably won’t see any all-new racing titles. But we could see some ‘spin-off’ titles.

Forza 2, actually pretty good. Dirt? Pretty, has a cockpit view, but doesn’t feel as ‘real’. The big news might be the MS FFB wheel, which isn’t code-implemented real well (steering linearity and dead zones), but having a FFB wheel in console sims that offer a setup garage and reasonable physics is a step in the right direction, IMO. (Note: I have an Xbox 360 running in 1080i on a 40″ LCDTV and Forza2 looks… well, gorgeous).

This was the year of the mod for sim racers, IMO. Some fantastic mods out there, both for rFactor and GTR2. In some cases they re-vitalize the games they support. 1955 Grand Prix, Off-Road trucks and buggies, Group C prototypes, etc. And the add-on track list atrFactorCentral is now 35 pages long! There’s almost more freeware content for rFactor and GTR2 than one person can keep track of, but it’s fun trying!

Two great ideas in web-based media had a super 2007. Here’s toAutoSimSport andSimRacingTonightwhich showed us how rethinking the use of available technology can provide new content in an innovative and interesting way.

Close, But No Cigar

SimHQ tried an ill-fated attempt at a non-stop 24 Hours of Le Mans race. We still don’t know what went wrong with the technical problems which never appeared until the race itself. Next time we’ll be ready. And there will be a next time.

But Was McLaren Disqualified?

SimHQ ran the entire Formula 1 racing season. While it was great fun, it proved to be as exhausting as the real thing. Like war, everyone was glad when it concluded. Well, almost everyone.Silly us. We’ll probably do it again some time.