Q. What has been the reaction of the soldiers featured in the book? Have they read it yet?

A. The officers and soldiers whose stories are told in the book have thanked me for interviewing them and for taking the time to try to provide a detailed and accurate account of the battle for Baghdad. They were exceptionally candid with me, revealing theirs fears and shortcomings as well as their minute-by-minute experiences in combat. They have told me that they consider the book fair, accurate and comprehensive.

Q. Please describe the interviewing process and research you put into the title.

A. I interviewed commanders, officers and soldiers from the 2nd Brigade during the battle for Baghdad and in the weeks after the war. After spending almost three months with six different military units (including the 2nd Brigade), I returned to the U.S. in May, 2003. I went back to Iraq that July and August, and interviewed more men from the brigade at their post in Falloujah. Later that year I made two trips to Ft. Stewart to continue the interviews after the brigade returned from Iraq. Most interviews lasted between one and two hours. I had soldiers go over their combat roles minute by minute. I was surprised by how detailed their accounts were, and by their willingness to share their thoughts and emotions. Many soldiers were interviewed several times. When soldiers’ accounts conflicted, I re-interviewed those involved to reconcile the differences. I also read through the combat histories of the units involved in the battle, and relied on personal journals, after-action reports and photos and videos taken by soldiers during the battle.

A. I’ve returned to my real job as a national correspondent for The Los Angeles Times. In fact, Thunder Run began as a long article published in the paper’s Sunday magazine last December. 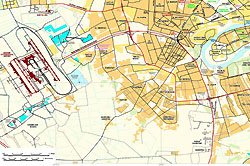 Map of southwest corner of Baghdad, showing cloverleafs, Baghdad International Airport,
and the center of the city. Note: The enlarged map is 1756 X 1157 and is 583 kb. 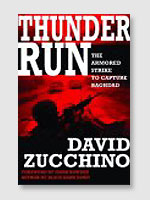 “Thunder Run: The Armored Strike to Capture Baghdad”
is available for purchase here at Amazon.com

Cropped map of Baghdad:
The Perry-Castañeda Library Map Collection at the University of Texas

StrategyPage: The Battle of Baghdad

Telegraph: The 10-Hour Battle for Curly, Larry, and Moe