It all started, Shoura, when the KFOR intelligence pukes (that is an American term — we have been hanging around Camp Bondsteel way too much) got some “hot dope” that the KLA was about to start something. We even knew what sector they would be in, and we staked out an area near an Orthodox church that was destroyed in the last war, the one in the late ‘90s. It still is, after all. Nothing ever gets fixed in this place. They’re too busy fighting. Well, that is not totally fair. But the building… it is still a shambles. It is strategically placed about 1100 meters from a ridgeline to the southwest, and our section of the 2/2 210th was hidden over the ridge. To our far right, about a thousand meters away, a section of two German Leopard 1A4 tanks. I am amazed that they still deploy those old tanks. They have the new 2A4 Leopards, after all. Can you believe we work hand in glove with German peacekeepers? Grandmama must be scandalized. Together, we took the church under observation. 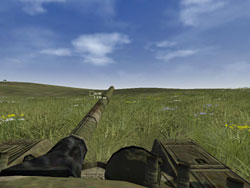 Our section leader decided to send only one of us forward, and to keep the motor-infantry platoon and two of our T-72B tanks back over the ridgeline. We were to “recon” the area and retreat if we got into heavy contact that we could not handle. If needs must, our brothers would back us up, and together the three of us are a match for most enemy tanks! So, I gave the order to Vadim, forward!

“Yes, we go forward, alone. Again.” Vadim swore into the interphone.“Why did I join the Army, eh?”

As usual, Pavel, stretched out to my left behind his scopes in the cramped, low-slung turret of our steel monster, was too cheerful for an early morning under the gun.

“What would you be doing if not for this wonderful Army, eh? Strutting your stuff on the beach, perhaps? Beckoning to the lovely girls in their bikinis? No, no. They would be scared away by your ugly mug!” 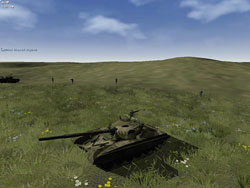 A snort from Vadim at that.

We jounced and bounced over the meadow, clouds scudding the skies above, casting random shadows on the grass as it blew in the wind. Vadim deftly sailed the T-72 over the meadow, and I took care not to get my arm caught in the automatic loader as Pavel’s baby, the Rapira-3 2A46M / D-81TM 125mm cannon, adjusted itself to maintain its angle regardless of the ups and downs of our movement. We were expecting trouble. I had ordered the travel locks disengaged, and Pavel to activate the fire-control system. This way, we would only have to select ammunition, and load the weapon without waiting for the stabilizer to catch and spin up. It takes precious time to do that.

I caught smoke to the far left. We cannot talk to the Germans — our fearless leaders have not thought to give us radios that can speak to one another. One has to be careful too, because there is no IFF like you have in the air and you might nail a friend if your head is not in the game at all times. The smoke was in the direction of the Leopards, and as we neared the top of the ridge I saw a missile smoke trail arc over the sky. The KLA has got hold of antitank missiles, probably mounted on a vehicle of some kind.