From Russia with Love:
Tank T-72: Balkans in Fire

I have found a great new simulation, ground-pounders. For quite some time, modern-day simulated armored warriors have been basically limited to one great sim: Steel Beasts. Al Delaney’s eSim company put that game out and it has captivated the simming world. It has realistic weapons systems and employment for the U.S. Army’s Abrams tank and the German Leopard 2A4, and despite it’s simplified graphics, we loved it. It is still one of the most realistic military simulations ever devised. What if you could have much of what you had with the original SB, and eye-candy too? Ladies and gentlemen, I give you Tank T-72: Balkans In Fire.

What a shame it is that this game is only released in one place: Russia. But how fitting, too. Russia basically has a lock on great sim gaming right now. From World War II in the air with IL-2 Sturmovik and its numerous descendants, to the modern air war with Lock On: Modern Air Combat, Russia owns the simulated skies that Western gaming houses have abandoned. Now they’re on the march on the ground, and eSim better take note, ‘cos here’s your competition. Between this and the upcoming Steel Beasts 2, the cup will runneth over for tank simmers the world around.

The people responsible for T-72 are the IDDK Group, a Russian publishing house and CrazyHouse, a brand new design studio. Founded in 2002, the studio began by localizing RPGs like Phantasmagoria for the Russian market and in April 2003 began development of T-72 alongside its own quest-based RPG, Vij: The Untold Story.T-72 released in September 2004 to the Russian market alone. There is no Western publisher, although IDDK public-relations man Dmitri Kovalev advises through SimHQ member Rainer Rohde that IDDK and CrazyHouseare seeking a Western publisher for this title. Pray that they are successful, simmers, because this title deserves to be brought out of the East and shared with simmers across the globe. It has the potential to be a tank classic. Let’s look closer at the Russian version of this game.

Setting Up Your Machine To Play It

If you’re really an enterprising soul, you can grab a copy of T-72 right off the Russian shelves. The game comes on two compact disks and takes up about 1.5GB when fully installed. According to the jewel case of my review copy, if you go here, you may be able to score a copy. I can’t tell you if that’s true, or of they ship outside the Commonwealth of Independent States (the former Soviet Union). The entire game, docs included, are in…Cyrillic, duh. For those of you who just want to get a taste after you read this, go to IDDK’s T-72 web site hereand download the demo. This is based on beta code from April 2004, and it gives a representative look at the game, but be warned — it’s beta code and the release is way better. IDDK, hoping for a little Western custom, provides a translated keycard and condensed manual on the site that really helped yours truly decipher the game. It took me about four days of fiddling and note-taking, and correspondence with Rainer, to figure it out enough to play it decently. And you’ll also mistake certain game features for bugs in the code. See below for that.

Kudos go at this point to Rainer Rohde, a German who is an active member on our Turret Talk forum here at SimHQ. He is sort of IDDK’s volunteer Western ambassador for T-72, and one of the few outside Russia with the full Russian copy on his computer. He put me in touch with Dmitri Kovalev and assisted me in tracking down problems I had with the translation of game sources, and thanks to that I can show you this excellent title.

If you get a copy from Russia with love, you’ll need to setup your computer to display Cyrillic characters. This is the only way you will have any chance of making sense of it all, because without the Cyrillic characters, all you’ll get are question marks on the on-screen menus. I advocate doing this first. The first time I installed the release copy, I immediately and accidentally uninstalled it because I was clueless as to what I was doing. Though I cannot read Russian, I’ve played Flanker and Lock On long enough to have a general idea of what some of the abbreviations commonly used indicate. And after awhile you start to be able to tell what a certain group of characters stands for. It’s sort of an education in gamer’s Russian. Without the Cyrillic characters you have no reference point at all. You need to do this.

Here’s how for Windows 2000 (I have no clue how to do it with XP or Win98). Get out your Windows 2000 CD-ROM. Go to Start > Settings > Control Panel > Regional Options. Install all the Cyrillic and Eastern European fonts you can find, then go to the “Advanced” tab and make sure all those Cyrillic fonts are installed. After that’s done, hit “set default” and select “Russian.” That won’t change anything on your system. But it will activate the Russian fonts for use in programs that feature Russian fonts. Unfortunately, it’ll “Russify” a lot of your other programs too, so when you’re not playing T-72 you’ll need to reset English or whatever language you’re happiest with, in your settings again. I have no idea why or how it works. But it works. 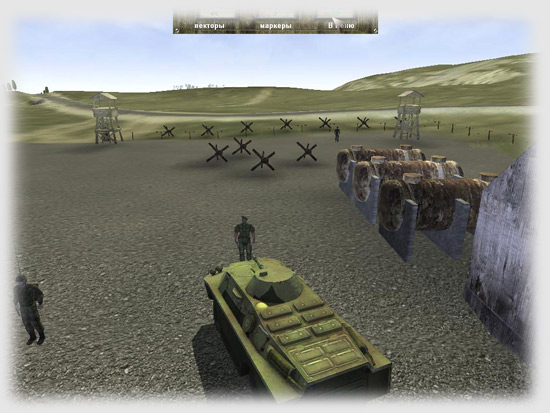