From the Main Menu, the right-hand menu gives you several options, as you can see from the translation. You can create and select a player character, which works the same as in most other sims with this option. The next mode is the player campaign, which is a set of scripted missions, with each new success opening new missions and advancing the back-story in the Diary. You begin the campaign with the T-34 and progress through a number of missions through the T-55, to the T-72 as the war goes on. You follow the campaign in the Diary, which is also one of the entries toward the bottom of the right-hand main menu. It’s all in Russian, so I have no Earthly what it says. That’s a problem for non-Russian speakers, because one of the details Crazy House modeled is the fact that in Yugoslavia in the 1991-1995 civil war, the sides were recycling destroyed tanks. That leaves you piloting a tank, at times, with partially nonfunctional systems. I thought that was a bug! See below for the fix.

Below the campaign are several single-player missions. These have been set up by Crazy House to give T-72 neophytes the chance to get used to the three player-controllable tanks in progressively more difficult environments. The first two single player missions are in the T-72, and amount to an obstacle course, so you can get used to driving in the game, and a firing range where you get used to both designating targets as the tank commander and fighting as the gunner. You then get a few stand-alone combat missions to take your practice to the next level. These are a lot of fun, too.

The artificial intelligence in the game is pretty good. It reminds me strongly of the interactive back seater in early 1990s flight sims like U.S. Navy Fighters, however if you have given the weapons free command the gunner will track and fire without your input on targets and the driver will move to keep you from getting killed, and retreat on his own if his courage breaks. I’d love to see Crazy House apply this crew AI to a flight sim with a multiplace aircraft. 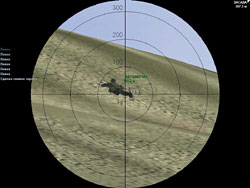 I generally play the game from the gunner’s position, commanding the tank from there, using the simulated commander as an observer and controlling movement by keyboard command to the driver. Unlike in Steel Beasts, a command to target from the AI commander in T-72 is not accompanied by the turret being pointed to that target. Though not realistic, I like it better, because my priorities and the AI’s are often different and I like to do the shooting, particularly in the T-55 and T-72, with their modernized fire control systems. You have an option to point out targets by a highlight something like the icons in multiplayer games. This compensates for the commander’s not spinning the turret for you. The highlighting can be disabled using the outside configuration menu.

In some circumstances it is instructive to just man the AA gun and let the AI fight alone. You can watch the battle progress and see how it operates. This is especially helpful where you got killed in the mission last time through and want to see how it happened. You still have to command movement from the keyboard, but the tank will stop automatically when it sees the enemy, track, select appropriate gun and/or ammo type, and engage without help from you if you so desire. You can play from the driver’s seat, the gunner’s, or the commander’s if you choose. There is a keyboard command for the commander to bring the turret to roughly where you want the gunner to engage, then by giving him the weapons free command he will select ammo and engage without your assistance. As the commander, if your gunner is injured by a hit, you can take control of the gun from the commander’s station, select ammo, and fire.