Take a look at the screenies from one of the T-34 training missions. You can see each position in the tank. And look at the environment! The maps are lush and filled with vegetation. In the outside configuration screen, accessed from your Start menu in Windows 2000, you have a bewildering array of configurability options. This menu is in English, oddly, and gives you the ability to set a lot of view and realism options. I’m playing with everything at defaults, but you can have terrain fill distance set farther out than you see in the screenshots if you prefer having the grass in your meadows stretch farther out. As you can see, the maps in game are very large. From the top of a hill it seems like you can see for miles. It is routine in game to engage at ranges of 1600 to 1800 meters in the T-55 and T-72, and I have managed kills on moving tanks from 1100 meters in the T-34 / 85 using the realistically modeled rangefinding optics.

The game can be hyper-realistic, or not so realistic. You can set options as obscure as whether or not barrel wear impacts on your weapon’s accuracy, if you like. The T-55 and T-72 model laser rangefinders, with the appropriate Russian method of computing lead. Both the modern tanks have the antiquated but effective Soviet-era active infrared systems for night-fighting, and they all three have working headlights for night driving. I switched on headlights in one T-34 mission and promptly got shot at by a concealed recoilless rifle! Be careful how you use headlights.

In these screenshots, my T-34 has been ambushed by a Super Sherman and an RPG team. The game models armor, and penetration values of various rounds at distances. This is one reason for modeling a small-scale conflict rather than the Fulda Gap: you can have up-close-and-personal small-scale, realistic firefights where the weapons behave much as they do in the real world and with pretty graphics without having to have a Cray supercomputer to run it. Take a look at the enemy soldiers! They take cover, and sneak up on you. In fact, before I could get the RPG man with my machine gun, he nailed me right on the glacis plate with an antitank rocket! When your tank gets fatally hit you’ll see hatches pop open and the crew bail out. They’ll fight with AK-74s, though you have no control of them; this ain’t Operation Flash Point. 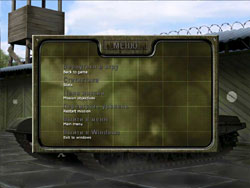 When the fight is over, you can hit “escape” and go to the run-time menu. Here’s a translated version from IDDK’s English condensed manual. One of the options takes you onto the battlefield for a little bomb-damage assessment. You can see your targets…and you…and who hit what. The game tells you for each round, what it was by color, and shows you where and how it hit, what type vehicle fired it, the range it was fired from, and the in-game time of the hit. You can also see a Russian-language menu that summarizes the unit’s kills and hit efficiency. Sooner or later you’ll get to the point where you can read enough Russian in game to know what it’s talking about. I find the iconography very helpful for this, because it identifies what you’re seeing with its Russian language name, such as Avtomatica for a trooper armed only with an AK-74. If you want, though, you can turn off the icons in the external menu. Be careful: without them, darn if I can tell who’s friend and who’s enemy! You have to be really careful, because everyone’s got the same darn equipment and uniforms. For this reason, I get a real “peacekeeper” feel in game — you don’t know who the enemy is till you’re under fire, just like in real life! If you want to cheat, though, you can go to the in-game F11 map, which shows the good guys in blue and the bad guys in orange. And you’re the pink one. However, fog-of-war is in effect and unless you have it set to “off” in the external configuration screen the map only shows the good guys and what your crew can see! 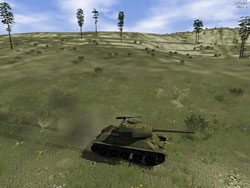 In-game graphics are beautiful. There are smoke trails, particle effects, wind is modeled, and so is rain, and you can see the wind blowing in the grass and in the 3d clouds over your head. The clouds cast shadows on the ground, and the ground objects’ shadows change as they move in relation to the sun, and other objects. Explosions are sharp and bright, a missile or cannon hit looking exactly like what I have seen on real weapons ranges. They really got that part of it right. Terrain is deformable, and shell holes stay when you blow ‘em out. Explosions in the ground throw clods of dirt. Water hides you, and flows like you’d expect. Weather changes, and field of view limits are present not just for you but for the AI too. Dust flies when you drive along dirt roads or cross-country, and you can often spot the bad guys by their dust clouds. And you can damage every building in game with shellfire or by driving your tank through them. Be careful with that last, though, because you’ll throw a track if you drive like a maniac. T-72 models that, too.