It’s simplistic — but not completely incorrect — to call PE “Steel Beasts with much better graphics and a lot of new features in the editors.” The purpose of this preview is not to get into great detail on what the SB line tries to do…. for a good overview, the SimHQ review of Steel Beasts may prove important background reading for new users. Download the zipped file here. The basics, to a large extent, haven’t changed since that review. What has changed, however, is significant. 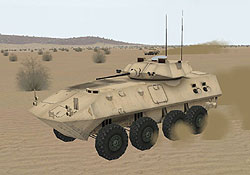 The first and most noticeable change to PE worth mentioning is the addition of 3D accelerated graphics. Gone are the original’s limit of a 640×480 resolution; PE users can now display the game up to 1600×1200 in 32 bit color. Something to bear in mind is that PE was designed to be an offshoot of a professional version…. pretty graphics are not automatically something a customer will pay for. Because of that, there are many areas that will likely be updated as work continues on Steel Beasts 2.

The largest environmental change I noticed in PE, aside from the much more attractive vehicles and world, is the addition of fog effects. The original game also offered reduced visibility options, but only varying degrees of long ranges. PE allows mission builders to reduce visibility down to 10 meters…. to the thermal sights go the spoils!!!! 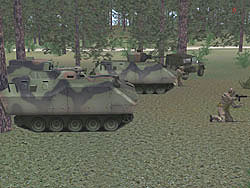 The landscapes look, for the most part, great, with new realistic-looking trees, underbrush, and obstacles like boulders and rocks. Vehicles vary greatly in graphical quality, seemingly based on whether the time has been taken to skin them specifically for PE. The M1A1 and T-80 look excellent, as do several other vehicles, but many more look essentially unchanged from the originals; eSim tells me all will be replaced with new models by the release date. Some interior graphics are not in the version I have at all…. for instance, as you sit in the HMMWV machine gun mount and look down, you see a black placeholder graphic. My guess is that new skins and graphics will be added as time permits. As in the original SB, the game continues to use sprite-based infantry graphics, but they are much more detailed, with new color and camouflage patterns; eSim has alluded to me that additional work on them is planned. An interesting, but logical (given PE’s focus), omission is that there are no human characters to be seen in any of the game’s vehicles…. no driver’s heads, tank commander’s bodies, or the like. Does it knock the immersion factor down? Not really to me, but it brings to mind the old debates about F/A-18 sims a few years back…. some had small crewmen running around the carrier deck, and others didn’t. User preference, I suppose. 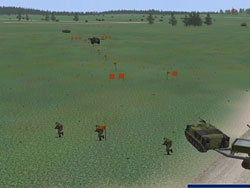 There are some environmental effects which I would certainly love to see in PE, but will likely have to wait for SB2 development, including nighttime, vehicle shadows, and inclement weather. Again, eSim’s bread is being buttered by the professional contracts at this point, so if clients don’t ask for features, they’re likely not going to be in the Pro edition or PE. I don’t have much doubt they will be in the future as development continues.

The interior of some vehicles bears mentioning, because it looks spectacular. In the Beta version I have, nice 3D interiors have been completed for the M2 / M3A2 Bradleys and the Leopard 2A5. Both are rotated and viewed with the mouse, but the Leo’s is far more advanced in its creation…. the cannon movement, the way the various sights move up to the player’s perspective when selected, and more really add to the game’s immersion factor. Screenshots don’t really do it justice…. it’s very well done. Many of the switches and buttons are clickable and useable as well. 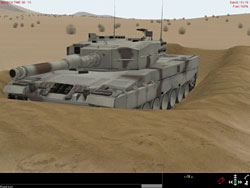 Several new crewable variants of the widely-used Leopard tank are included in PE…. in addition to the Leopard 2A4 from the original Steel Beasts, eSim has now also included the Leopard 1A5 and the Leopard 2A5.

The former is a comparatively lightly armored tank designed in the 1980s to give the Leopard 1 family (a circa-1960s design) an ability to handle the threats of that era. The bottom line on it is that while it can dish it out, it can’t take it as well. I think it will be a fun multiplayer tank to level the playing field at times.

While not the newest Leopard model in the world, the 2A5 is a step up from the 2A4 largely (for the sake of the game’s players) because of the commander’s independent thermal sighting system. As mentioned earlier, the 2A5’s clickable turret controls and interior graphics are modeled very nicely.