A unique new tool in the mission editor is the addition of a UAV. Mission creators may add a UAV flight path into their mission, and the user will see a new UAV interface at the mission’s briefing screen. Using standard Play / Rewind / Forward controls, the UAV offers the option of watching the landscape below via a TV (color) or FLIR (green-white IR) image. An icon on the briefing map indicates the approximate location of the UAV at the time. To simulate early UAV models, neither the camera nor the flight path can be altered by the player, and its capabilities are only offered at the briefing, so make a note of what is spotted, and where! While it’s not the most functional or useful tool in PE, it’s a nice touch that may add to a well-done mission…. think of it as something the tank battalion’s S-2 would show prior to a mission to give you a feel for what’s ahead.

The images below show the UAV in action. The image on the left shows troops in a small town using the FLIR on the UAV, and the one on right shows a pair of tanks with mine rollers using the TV on the
UAV.

It was true in 2000 for the original Steel Beasts and it’s still true today…. the map and mission editors in Steel Beasts Professional PE are the best ever released for a tank sim. They are easy to understand, powerful, and capable of creating just about any scenario you can dream of. The ability to create randomness to the enemy’s course of action, and even tie in random elements to each other, truly make this a title that isn’t going to grow old soon. 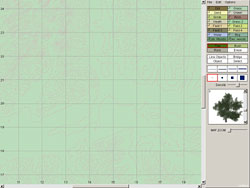 Functionally, there isn’t much difference between PE’s terrain editor and the one from the original SB. If you can use a paint program, you can edit your own terrain (or use some of the excellent provided ones…. the National Training Center is a great included map). More types of terrain are offered than in the original, and there are several new objects included as well, such as new buildings, trees, bushes, and more. Many different types of roads are offered, and an automatic bridging tool creates road bridge crossings in a snap.

The mission editor is also similar to the first SB, but offers some new goodies such as picking from eight national camouflage patterns of the infantry uniforms for both sides, the aforementioned Breach waypoint commands, a “new” (which was available by patch for the first SB) ammunition selection screen, fuel level selection for vehicles, and more. It’s not greatly different from the original SB, and that’s not a bad thing, as it was so powerful even then. 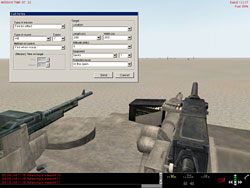 The king of battle is enhanced in PE over the previous title. Calling up artillery, or setting it up in the mission builder, now brings with it several new options. In the mission editor, designers can choose — independently for each side — the number of artillery tubes available, what type of rounds are offered (“Illumination” remains tantalizingly grayed-out), specifications for artillery-delivered minefields, priority of fire, who may call for fire, and more.

In game, players can choose the type of fire (Immediate Suppression, Fire for Effect, or Adjust Fire), how much fire is requested, when (At My Command, Fire When Ready, or timed on delay), the type of round, what the splash pattern should be, and what the target is.