Sergei my brother swilled his coffee in its metal cup, and raised it slowly, eyeing their newest crew member with a sly smile. He spoke in English to Dan.“Look who you have fallen in with, my enigmatic American friend. Are you sure you wish to tweak the dragon’s nose with men such as we?”

Lt. Commander Phinin would have looked strange to his American friends, I think, sitting there in the rain sipping black coffee in his green tanker’s coverall. But he is as brave as my brother’s men, and returned “Absolutely, comrade Lieutenant. I can’t think of better men to face danger with.” Smiling, he addressed Sergei in flawless Russian, with the accent of Moscow! I know this took my brother aback, for until then Sergei had interpreted for Dan to the regimental colonel and to his crew.

“You are full of surprises, my friend. By the by we do not stand on rank here. Though Pavel and I are officers, and Vadim an NCO, we are friends, for we all face the same trials. So I am Sergei Dimitrievich, and not comrade Lieutenant. And we do not call one another tovarisch so much now, since the Party lost power. My father, he is a good Communist in his heart, but he does not show it, for the Communists are disfavored today.”

“Your mother is not so?”

“Nyet. Mother never approved of the Party, I think.”

Phinin nodded. “I’m not surprised, since she’s an American. It must have been hard for her, living in the Soviet Union.”

This took Sergei quite by surprise. Very few know where Mother is from. She met our father when she studied at the university in Moscow, an exchange student studying Russian history in the 1970s. Father teases her often about the CIA, but Mother is of course not a spy. “You know much about my family, Dan.”

“Yes, we’re well informed, as I’m sure your people are well informed. And I know that your mother isn’t the only American by birth in your family.” Phinin spoke in English now, I’m sure to prevent Pavel and Vadim from hearing too much. “Your sister Alexandra was born in New York, in 1978.”

Sergei’s eyes narrowed. “Da. Mother went to her parents when both Shoura and I were born. I do not know why. I too was born in the United States, also in New York. Nevertheless, we are Russian. Shoura has been in the U.S. since, in Nevada training with your air force, but I have not. What is your point, Commander?”

“Only to tell you that we too are concerned for her welfare. Alexandra Dimitrievna has friends she doesn’t know about in America, Sergei. She’s in trouble now. That’s all I can tell you about this mission.”

My brother tensed. “Shoura is in danger? We are to help her?”

Phinin raised one hand to interrupt. “I can’t tell you any more, Sergei. When do you want to leave?”

As Sergei wiped the rain from his face, thinking, Pavel interrupted. “Sergei, what is he saying? I heard Sacha’s name.”

“Sacha? Your sister, Sergei? I thought she was at Sochi, in Russia north of us. What is wrong, Sergei?” Even Vadim was concerned. Sergei’s men are loyal to him, they are friends forged through long and arduous trials together.

“Peace, my friends.” Sergei is like our father. He can always put his own fears away and concentrate on the task at hand. “Dan has told me no more than you know already. Our work in the south has something to do with my sister, evidently. But Pavel, you know that she can take care of herself. Now, we must get south of the Gumista.”

Sergei opened a map, covered with plastic against the weather, and spread it out on the tank’s 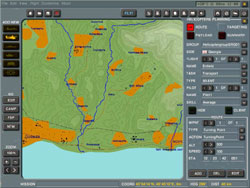 fender. “Now, my friends. Our first task is to cross the river here. Dan, where is our ultimate destination?”

Phinin pointed to a spot on the map, a day’s travel south overland.“This small village here, Aacy. We need to get there by tonight and find a good place to take cover.”

Vadim squinted at the map. “We can cross the river here, west of the IRLF checkpoint near Gudauta. There is a ford. I suggest that we stay clear of the Gudauta highway and go over land until we get here at Abgarhuk, and then cross the river. The intel pukes say that IRLF patrols are thin here.”

“Da.” Sergei cut in. “And this captured mujahid relic we ride in, it shall protect us from prying eyes once we are there…but we shall have to be careful to identify ourselves with flares to our own tanks.” My brother traced a line through the Russian-occupied part of the coastal plain that Vadim had indicated, his brow furrowed in thought. “Whatever Shoura is up to, this small village of Aacy would be a good place to be.” He narrowed his eyes at Dan. “A meeting, perhaps? With one of the mujahids? But Shoura is no traitor!”

“No, no.” Phinin sounded a little exasperated. “That’s not it at all. Look, guys. She’s doing something important, okay. We just need to be there for her. Let’s leave it at that for now.”

“Then we should be about it.” Pavel was impatient. “It is already growing light. We have little time. Sergei, should we not mount up?”

And so they set off, headed south toward the Gumista, that river which the Sheikh Muqtadeh has marked as the border between his territory and ours in Abkhazia. By noon that gray, rainy day, their T-55 approached the river ford Vadim had selected. At the same time, my own position had become more interesting still.