Wow, Christmas is just around the corner! What does that mean for the PC gamer? Well, to start with you need to start saving your money and begin deciding what games to get and what to pass up.

I’m not concerned with the thousands of console games to be released in the next few months, or even the hundreds of PC games (OK, I’m bumping those numbers a little!), but I do want to talk about what squad tactical shooters are coming to the PC in the near future.

Before we get started, let’s break down what a squad tactical shooter is. We all know that a squad is a group of soldiers, usually 10 to 12. A squad is part of a platoon, which is part of a company. “Tactical” is the way that squad moves, engages, and sometimes retreats in battle. The tactics used by the squad include movement, formations, cover fire, flanking, and bounding over watch. There are many more but these are the most common. “Shooter“, well that’s an easy one, a shooter is someone who shoots, someone who pulls the trigger of a gun, a weapon, or in our case clicks the left or right mouse button.

Call of Duty: United Offensive. Call of Duty was an incredible single player WW2 shooter, and had a pretty cool multiplayer component, with plenty of maps, weapons, and squad commands. Now the first add-on to the WW2 shooter will contain new campaigns for the three allied nations, and new multiplayer components including ten more maps and three new game modes: base assault, capture the flag, and domination. It has just been released and should be in stores now. 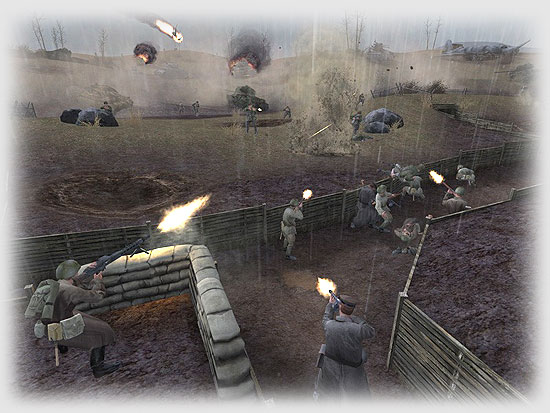