Shellshock: Nam ’67. Yet another Vietnam game. This one seems to be a little different from the other two mentioned. For one, you don’t have a first person character in this game; instead your character is seen in third person view. Also, this one strives to show you the horrors of war. It seems a lot grittier and more detailed in death and combat. Booby traps, dead bodies, including civilians, piled up in burnt out villages, it’s all in this game. This appears not to be for your ten year old son, the mature rating probably should be followed. Available now.

Ghost Recon 2. I won’t go into my personal opinion on Ubisoft’s and Red Storm Entertainment’s philosophy concerning us PC gamers, but I will say that they should at least consider what made Ghost Recon and it’s two add-ons so popular and fantastic. It’s been reported that there will be two versions of Ghost Recon 2 made: one for the Playstation2 and Gamecube systems and another made for the Xbox and PC. What I understand is that GR2 will be quite different from the original. You’ll only be able to have control of one character (unable to jump to other operatives) and that the game is meant to be played from a third person view, with the option to go first person. The missions, weapons, and action should be more intense and more fun then the original. In Ghost Recon, I personally play the single player campaigns once or twice then spend the rest of my time in multiplayer with my squad of gamers. There will be a number of multiplayer maps, weapons, and uniforms, but most of the multiplayer information is being kept secret until release. Due in 2005.

America’s Army. This is truly the best deal in squad tactical shooters. Why? Because it’s free and everything is better when it’s free! But even if I had to pay for this game, I would, in a heartbeat. The developers of this game have huge resources of every variety. America’s Army continues to get updates and fixes every six months or so. And it has been reported that the next installment, America’s Army Special Forces: Vanguard is in final development and will contain new maps, vehicles, and weapons. There is no set date for release but I’m betting on July 4th of 2005. 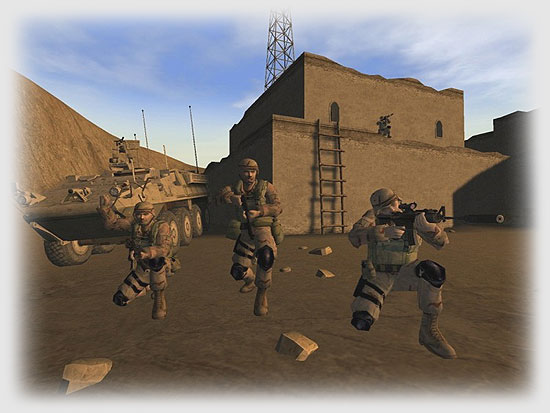