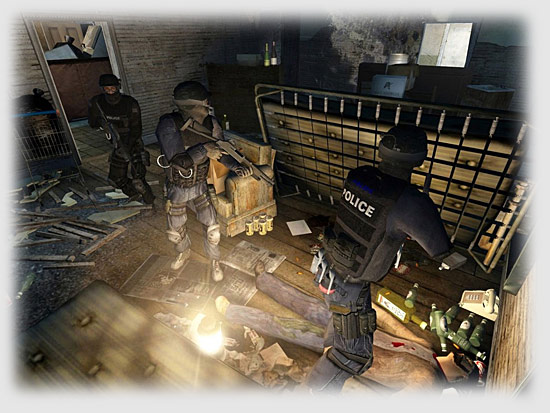 “Breach, bang, and clear”. oh how I loved giving that command in SWAT 3. To

see my element stack up on the doorway, one officer would open it, while a second would toss in a flashbang, then bang!, the element would enter the room clearing left and right then the “all clear” report was given.

The SWAT series has been around for a long time. It first started out in thePolice Quest series, and then it took a turn to a video based adventure game. Then a top down, real time strategy game which included police dogs and armored ram vehicles. Then came SWAT 3 winning the hearts and computer hard drives all over the world. SWAT 3 was so good that they came out first with the Close Quarters Battle, then the Elite Edition which added a multiplayer element. Then topped it off with the Tactical Game of the Year Edition which increased the number of multiplayer players from five to ten and added mod activation tools. Now, for 2005, comes the next level of SWAT action, SWAT 4 with a new developer. Irrational Games has taken over the making of SWAT 4 after the debacle that was SWAT: Urban Justice. 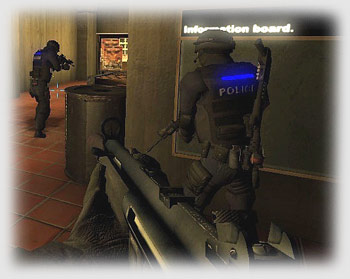 SWAT 4 will contain a two part tutorial. The first part will cover using tools and certain skills in the game, while the second part teaches you how to use and control the AI members of your element.

SWAT 4 will contain 14 missions where the player is the element leader. You will receive the call up, get your mission briefing along with either the actual floor plans of the building or a drawn map of the area of operation. A new feature, you will also have access to the 911 tape of the caller. You will then go to the equipment screen where you will pick and choose your gear along with your elements gear. Then off to complete the mission. Afterwards, your get a detailed list of stats and successes along with your total points for that mission. You will have the choice of a campaign, single missions, quick mission, or make your own quick mission.

SWAT 4 will have an in-game browser and also be partnered with GameSpy.

You will have a number of choices when it comes to multiplayer action. First is a co-op, where it’s just like the single player mission but up to 5 players can be online to take a role of one of the officers. There’s also three other modes of multiplayer head-to-head. Up to 16 can join these styles of games. One is the basic free for all death match which is pretty much required now days. The other two modes are more team cooperative. One being a VIP escort mission where one member of the SWAT team is the VIP and needs to be escorted somewhere, while the other side is the bad guys trying to capture the VIP, hold him for two minutes then kill him to win. The final mode is being kept hush hush, but I’m thinking it will be another goal type game. Maybe infiltrate an area and disarm a bomb, or rescue some hostages.